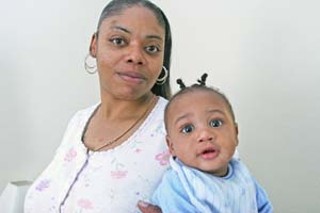 Lisa Stampley and son Hakeem are a couple of the thousands of Katrina evacuees the city placed in rental properties throughout town, and whose rent and utilities are, for now, covered by FEMA. (Photo By Jana Birchum)

Although only a select few Austinites knew it at the time, the butts of thousands of hurricane evacuees in the area were saved – albeit temporarily – from an uncertain housing fate Friday. That's when the Federal Emergency Management Agency notified nervous state and local governments across the country that FEMA will continue reimbursing them for Hurricanes Katrina and Rita evacuees' rent and utility bills beyond the end of February. In Austin, that includes about 2,000 families of Katrina evacuees, all of whom the city has placed in rental properties throughout town.

FEMA originally set a March 1 cutoff deadline for the temporary emergency assistance. Now, however, a memo from David Garratt, FEMA's acting director of recovery, instructs governments "not to terminate any lease agreement that FEMA is presently reimbursing" because the agency will continue to pay the bills of these evacuees until they've been approved for "direct" public assistance from the federal government. The city has a nearly $39-million line of credit through FEMA on which it draws to pay evacuees' rent and utilities. Austin has spent about $4.4 million of this money so far, said Deputy Chief Financial Officer Leslie Bowder.

FEMA will handle the cases of evacuees who are unable to get continued rent and utility assistance from the agency on an individual basis, spokeswoman Barbara Ellis said. Garratt's memo says that governments and tenants will receive 30 days' notice before any lease is terminated. If FEMA rejects an evacuee's application, he or she can always appeal the decision; however, Heather Godwin, an attorney with Texas RioGrande Legal Aid's hurricane legal assistance program, worries that the deadline extension "closes a hole" for evacuees whose applications are pending appeal, leaving them in bureaucratic limbo with a "big 'no' stamped on their head until the appeal goes through." Ellis did not know if FEMA has decided if people in the midst of the appeal process will be included in the extension.

Evacuees can apply for individual public assistance by going to www.fema.gov or calling 800/621-FEMA. (For those with speech or hearing impairments, call TTY 800/462-7585.) Godwin, a Katrina evacuee herself, suggested handling all FEMA business in writing "because you have confirmation that you sent certain information on a certain day." FEMA's mailing address, in this case, is FEMA Individuals and Households Program, National Processing Service Center, PO Box 10055, Hyattsville, MD 20782-7055.