Democrats Unite Behind Howard for District 48

GOP uncertain how to approach run-off 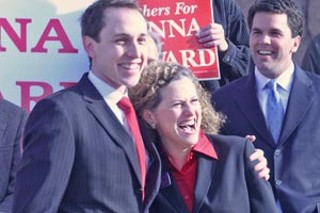 Aspiring District 48 legislator Donna Howard receives a hug from former rival Andy Brown in front of the Capitol Monday morning. Democrats rallied behind Howard after she qualified for a run-off against Republican Ben Bentzin. (Photo By Jana Birchum)

Whatever reasons the Democrats had for not uniting behind Donna Howard before last week's special election, disappeared almost as quickly as the Republicans' confidence in Ben Bentzin's ability to pull off an outright victory in House District 48. Now, GOP party activists are divided on whether Bentzin can turn around his lackluster performance against Howard in next month's run-off election.

That contest will take place Feb. 14 – Valentine's Day – with Howard entering the election with a 12-point lead over Bentzin. Early voting starts Feb. 6. Reversing bipartisan predictions that Bentzin would dominate in the Jan. 17 election returns, Howard came within 73 votes of an out-and-out victory over her opponent, who limped into the run-off with less than 38% of the vote in a four-way race.

Bentzin, a former Dell exec, had outraised and outspent his opponents by wide margins, dropping a few hundred grand on TV ads and slick mailers. But the advertising blitz failed to generate enthusiasm among voters in this moderate swing district, which includes West Austin and Northwest Travis Co. In fact, out of 13,555 ballots counted last week, 60% went Democratic, favoring either Howard or distant third-place finisher Kathy Rider (who endorsed Howard within a couple of hours after the polls closed).

(Interesting side note: There were 13,555 ballots counted, but there were 13,621 ballots cast – a rather significant, at least in this race, difference of 66 ballots unaccounted for. Travis Co. Clerk Dana DeBeauvoir said they were "undervotes" – ballots improperly cast, possibly without selecting any candidate, due to voter error or confusion.)

"Ben entered the race as the odds-odd favorite," said lobbyist and Bentzin supporter Bill Miller. (Efforts to reach Bentzin through his campaign manager and political consultant were unsuccessful.) "So what went wrong?" That's the constant refrain of Republican operatives. On the other side, Chris Elliott, chairman of the Travis Co. Democratic Party, has a ready answer. "I don't think the message could have been any clearer," he said. "This election was geared to give the Republicans the greatest advantage, from the timing of the election, the money that was available, and the fact that they had a single candidate. ... We took their best shot, and look at the result." Democrats say that Bentzin bore too close a resemblance to former HD 48 Rep. Todd Baxter, who resigned unexpectedly late last year and is now lobbying for the cable industry. Baxter's voting record was a more accurate reflection of the Republican Party leadership than of the voters who live in the district, Elliott said.

Meanwhile, GOP activists are split on how to position Bentzin in the run-off election. Some favor dumping more money into his campaign while others – inlcuding the business lobby – are questioning whether they would get a return on their investment. Still others believe a safer route would be to concede the run-off and spend the rest of the year building a case against Howard in the general election in November.

Travis Co. Republican Party Chair Alan Sager is proceeding with his game face firmly intact. "Ben will win because he is the better candidate and he is not trying to hoodwink the public into thinking he is something that he is not," he said. "Donna Howard was thrown out of office by the people who know her best." Sager was referring to Howard's unsuccessful re-election run for the Eanes school board in the late Nineties. Her loss followed the controversy over building a second high school in the district, which Howard and the majority of the school board supported but voters soundly rejected. Howard went on to lose her EISD seat, along with two GOP incumbents (including Jerry Hughes, husband of George W. Bush confidante Karen Hughes). Howard insists that her mainstream views are in line with her district, and she says her Republican supporters – including current Eanes school board trustee Clint Sayers – bear her out on this score.

Sager is unconvinced, pointing to Howard's endorsement from labor groups as proof of tax-and-spend liberal leanings. "She represents the unions who have made a mess of our public schools," he said. "They do to our schools what the New Orleans levee board does to the levees in New Orleans, take a lot of money and produce no results."

Howard's performance last week has galvanized Democrats here and across the state. On Monday morning, Andy Brown, who had planned to oppose Howard in the March primary election, gathered with other Democratic notables on the steps of the Capitol to publicly endorse Howard in both the run-off and the primary. While he still holds political aspirations of his own, Brown says those plans are on hold, at least temporarily. "My main focus is to help Donna get elected," he said. He is now a co-chair on Howard's campaign and, more significantly, one of her largest contributors; he's transferring $10,000 from his war chest to Howard's, with the blessing of his major donors. After the press conference, two veteran Senate Democrats – Rodney Ellis of Houston and Eddie Lucio of Brownsville – sidled up to Howard and offered some private words of encouragement.

Last Friday, Wes Benedict, who chairs the Travis Co. Libertarian Party, filed a complaint against Bentzin's fundraising committee – Friends of Ben Bentzin – claiming it failed to disclose more than $250,000 in campaign reports due Jan. 9. (Howard filed a related complaint with the state Ethics Commission late Tuesday.) Bentzin's filings with the commission that day do not include the money he raised and spent between Oct. 21 and Dec. 31; a separate report covering that period was not filed until the day of the election. Bentzin's contributions, including last-minute donations, total more than $353,000. Conservative San Antonio millionaire James Leininger, who typically gives to candidates he can count on to support state-funded private school vouchers, gave Bentzin $20,000, according to reports.

Additionally, Bentzin's filings show an outstanding $417,974 loan left over from his unsuccessful senate bid in 2002. The transfer of the loan to his new campaign suggests that Bentzin hopes to pay off his old debt with contributions to this race. The maneuver is entirely legal, says campaign finance expert Fred Lewis. But he said it raises some ethical questions about the unlimited amounts of money that candidates can loan themselves in hopes of having the debt paid off by contributors. "Today's contributors probably don't know that they may be giving to pay off a prior campaign debt," Lewis said. One way to avoid potential conflicts is for candidates, those who can afford it, to donate the money as a gift to their campaigns, Lewis said.