In a district designed to favor the GOP, Democrat Donna Howard needed a surprising mere 73 more votes to avoid a run-off. 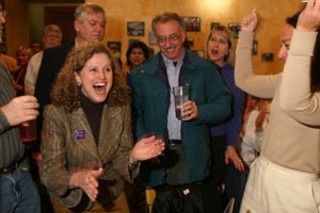 Democrat Donna Howard reacts to election night numbers showing that, after trailing Republican Ben Bentzin in early voting, she had pulled ahead. (Photo By Jana Birchum)

In an astonishing finish that sent ripples of shock and joy across the Democratic wing of Travis County, Donna Howard came within a whisker of pulling an upset Tuesday, in what was supposed to have been Republican Ben Bentzin's race to lose.

The two House District 48 candidates now move to a run-off, probably next month, with the winner replacing former Rep. Todd Baxter, R-Austin, and representing the district in a special legislative session on school finance this spring.

Almost certainly, the run-off will take on a strongly negative hue – this time with underdog Bentzin expected to go on the offensive. Perhaps no one was more surprised by Howard's near-victory experience than Howard herself, who had only hoped publicly to hold frontrunner Bentzin below 50% and force him into a run-off. But Howard seized 49.5% of the vote in the four-way race, leaving Bentzin with just 37.8% of the take, followed by Democrat Kathy Rider with just 10.4%, and Libertarian Ben Easton with 2.3%.

Howard attributed her high numbers to a cross-section of voters in her district, which covers West Austin and west/northwest Travis County, who are turned off by the current House leadership's failure to deliver on education and health care, among other things. "I think that people really want a change," she said between congratulatory hugs from well-wishers gathered at Waterloo Ice House in Northwest Hills. "They're tired of gridlock at the Capitol. They're tired of the same-old, same-old."

Democratic strategist Kelly Fero, a consultant for Howard, took the message a step further, citing Gov. Rick Perry's ringing endorsement of Bentzin – while blasting Democrats – as a likely factor in his lackluster showing. "Voters are in a foul mood and highly frustrated with the inability or unwillingness of this crowd to get the job done," he said. "Rick Perry came in the day before the election to endorse Bentzin … and clearly cost him votes, since he won the early vote, but lost big on election day." Indeed, not even the endorsements of Republican leaders in Congress could bump Bentzin's numbers to a more respectable level. U.S. Sens. Kay Bailey Hutchison and John Cornyn, along with U.S. Rep. Mike McCaul, had all backed Bentzin in the race.

Lobbyist/political consultant Bill Miller, a Bentzin supporter who has close ties to House Speaker Tom Craddick and other GOP leaders, acknowledged there was "some kind of disconnect" in the Bentzin campaign. "You have to look at everything you did with a critical eye," he said. "You can't assume that anything you did was the right thing. That's where you start [with a run-off campaign]," he said, adding that a candidate's ability to connect with voters is crucial in small races such as this one. "Voters look at everything," he said. "You look at [a candidate's] associations, issues, presentation, demeanor … That counts for a ton in a special election. This is a small-turnout deal … there's no other wind blowing except what you create." 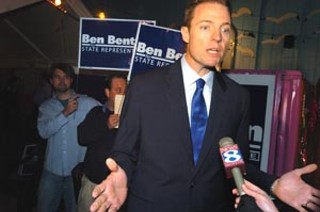 Bentzin talks to the media after pulling only 38% of the vote in a district designed to favor the GOP. Howard needed only 73 more votes to avoid a run-off. (Photo By John Anderson)

Bentzin was not helped by recent news reports that he had hired political consultant John Colyandro in his unsuccessful bid for state Senate in 2002. Colyandro and U.S. Rep. Tom DeLay face money-laundering charges in their efforts to secure a Republican sweep in the 2002 lege races. The Howard campaign, meanwhile, expects to pick up votes from the two other HD 48 candidates. Rider immediately threw her support behind Howard for both the run-off and the following March primary election. Democrat Andy Brown, a primary contender who was disqualified from running in the special election, similarly gave Howard the thumbs up. "I fully support Donna and expect her to win the special election," he said. "I've always said that I will not run against any Democrat who wins this special election, and I will stick to that."

Travis County's Libertarian leaders were as jubilant as the Democrats Tuesday night, declaring that Bentzin's fence-straddling on critical issues nearly sunk his campaign. "Ben Easton made it clear that he is a fiscal conservative, while Ben Bentzin did not," said Wes Benedict, chair of the Travis Co. Libertarian Party, in a statement delivered soon after the final returns. "Ben Easton unequivocally supported school choice, while Ben Bentzin danced around the voucher issue. We think that caused a lot of frustrated Republicans to stay home."