AISD Gets the Ball Rolling on High School Redesign 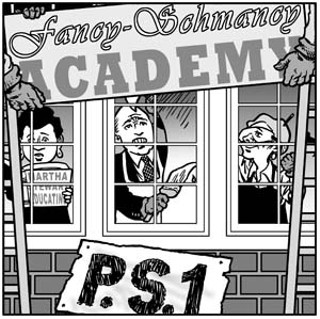 Slice! Dice! Mix! Puree! On Thursday the Austin ISD board of trustees grappled with the proper recipe for high school success, the latest step of a multiyear process known as high school redesign. Redesign, or breaking large high schools into "educational condominiums" of autonomous schools-within-schools, is the Big Idea in the educational policy world – for evidence, one need only view the consultant-studded attendance list of the meeting, and the sweet aroma of a $1.5 million redesign grant from the Bill & Melinda Gates Foundation that now permeates AISD. Already a year into the discussion, each AISD high school will this spring develop a plan to help transform Austin's high school landscape from 11 comprehensive schools into a "portfolio" of these specialized small learning communities (SLCs). (The basic recipe is on display at Johnston High, which this fall rearranged itself into humanities, science, and business academies of a few hundred kids each.) However, what the discussion showed was that the high-profile, much-wonked-about business of school-slicing and academy-launching can't work without addressing harder issues of equity.

"You can't simply say, 'We want to take this school and chop it into four parts because that's what Gates gave us money to do,'" said Steve Phillips, a redesign expert from Brooklyn College. "That will work for five years and Gates will think his money was well spent until he gets to year six."

The idea behind SLCs is that a 300-student academy focused on, say, science allows a science-loving kid to better know her peers and teachers, which in turn helps her care about linear equations and Washington crossing the Delaware. It has another potential as well: If every high school in AISD becomes, in effect, a confederation of specialized academies, it could help AISD achieve the long-elusive goal of diverse campuses. "If there's a system that's always routing all your lowest performing kids to one place, this is a chance to do something different," said Phillips. "We do know that when they're in a more heterogeneous environment, there's more of a chance that more of them will do better."

According to Texas Education Agency data, low-income students at high-performing schools like Anderson and Bowie lag behind their middle-class peers in the desks beside them. However, they also outperform students in schools where virtually everyone is poor, showing that heterogeneity does matter. AISD as a whole demonstrates this phenomenon: A recent National Assessment of Educational Progress study showed AISD students outperforming their urban peers, even when you break the numbers down by race and class – AISD's poor students beat other poor students, AISD's black students beat other black students, and so on. While good teachers and curricula were at the root of this success, the fact that AISD and the other top-performing district in the study – Charlotte, N.C. – are "only" about half poor (compared to upward of 80% and 90% in other urban districts) also play a role.

It's a delicate balance, however – as trustee John Fitzpatrick pointed out at Thursday's meeting, AISD must serve both a low-income populations and middle-class families who can and do bail for private, charter, or suburban schools that offer, among other things, less diversity. In the 2004-05 school year, AISD had 6,957 kindergarteners but only 5,451 eighth-graders. This isn't just "white flight": As LBJ High principal Patrick Patterson pointed out, black middle-class families leave for Pflugerville or Manor, and Trustee Cheryl Bradley added that motivated low-income parents transfer their kids away from Reagan. As AISD tries to develop academies that will convince more of these families to stay, it will have to find a way to deal with the reputation and buzz that says there are certain schools to which good students do not go. This is a concern voiced by Johnston director Celina Estrada-Russell, who this fall launched her redesigned campus, replete with snazzy new academies, excited teachers, and scores of community partners, only to see many of the most committed families continue to transfer their students away. "We have an intelligence flight," she said. "A talent flight. We have 13 students in the band."

The portfolio idea, then, could be an opportunity to ditch some of the names many AISD parents now indelibly associate with failure and violence: Instead of one big Reagan High (for example), or even three mini-Reagans, AISD could have three all-new academies hosted in the building formerly known as Reagan. Implementing the portfolio vision across the district, however, will be complicated by neighborhood loyalty and memories of failed experiments in magnet programs, plus the fact that those schools that are already performing well simply don't feel change is needed.

"The community views the school as successful and it is, for most kids on most days," said interim Bowie High principal Carol Mills McKenzie. "It's very difficult to make change in an organization that views itself as very, very good."

So far, AISD has set nothing in stone, so ideas about portfolios, academies, mixing, and matching is all tentative. AISD strongly encourages the community to join in the discussion (among other reasons, because AISD needs to demonstrate its commitment to community engagement to the Gates Foundation to get more money). The issues promise to be difficult, and the discussion at times tense, but those who care about public education will no doubt agree with MacKenzie's final word on the subject.

"It is better to struggle with a sick jackass," she told the trustees, "than to carry that wood yourself."