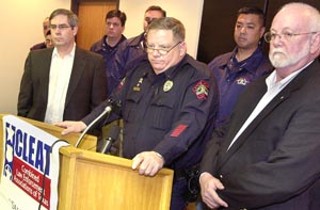 Austin Police Association President Mike Sheffield (at lectern) filed a grievance against the city for the leak of the Citizen Review Panel decision in the Schroeder/Rocha case. (Photo By John Anderson)

The city of Austin's inquiry into who leaked a citizen police review panel's recommendation to a reporter is absolutely not an investigation, says Kristen Vassallo, chief of staff to city manager Toby Futrell. "It's fact-finding," she said, carefully avoiding any use of the I-word. Former Harris Co. assistant DA Charles Noll will conduct interviews and gather information, but that's just good ol' fact-finding, which in no way should be construed as an "investigation," Vassallo insists, perhaps fearing that "investigation" invokes images of sweaty city staffers strapped into chairs with electrodes taped to their genitals.

Noll will be paid $250 an hour to not investigate how Austin American-Statesman reporter Tony Plohetski learned that the citizen review panel had voted in closed session to recommend the firing of APD Officer Julie Schroeder, who fatally shot 18-year-old Daniel Rocha during a traffic stop. Even before Plohetski revealed the board's vote in a Nov. 16 story, the Austin Police Association – which learned about the panel's recommendation when Plohetski called for comment – filed a grievance with the city, demanding an inquiry into the breach of confidentiality. Under the terms of its contract with the city, in a Nov. 7 memo to Futrell the APA called for the appointment of a "fact finder" to "review relevant materials of fact and take evidence to reach written findings of fact."

Plohetski has already been asked to cough up his source. "We were asked to assist in the investigation and we've declined," said Statesman managing editor Fred Zipp, refusing further comment.

Even though the new zeal for cracking down on leaks is one of the biggest national stories of the year, with deep ramifications for both the press and government, the Statesman opted to downplay the story, giving news that the city had hired a "fact finder" three paragraphs in the "Central Texas Digest" on page B3. That same day, editors chose to devote 20 inches to an Associated Press story about a Houston TV station fighting a subpoena, and page one featured a lengthy wire story about Bob Dylan hosting a show on a pay satellite radio service.

Zipp declined to discuss the paper's coverage of its own big scoop, but editors around the country are understandably nervous about a growing trend toward targeting sources. The Valerie Plame case engulfing Washington exposed the gossipy underworld of leaks and counterleaks, but it has also encouraged government agencies to crack down on leaks and anyone who talks to reporters.

Few midlevel media organizations have the resources these days to fight First Amendment cases, says Bryce Nelson, professor of journalism at USC's Annenberg School of Journalism. Any effort to investigative anonymous sources will send ripple effects through coverage, making potential whistle-blowers more cautious. As a result, "we will know far less about what goes on," Nelson said. "There is an enormous chilling effect to investigating sources."

City officials emphasize that the noninvestigation was mandated by the city's contract with the police union. The city manager is simply following the letter of the agreement with the union, which calls for hiring a "fact finder," they say. According to assistant city attorney Anita Stephenson, there are important distinctions between an investigator and a fact finder. For example, an investigation could require some sort of conclusion or report, she says. "All the contract requires and [Noll] is charged with doing is dealing with facts," Stephenson said.

The city's fact-finding exercise will likely focus on the members of the review panel, although it is possible others may have heard about the recommendation. The APA's grievance notes that a panelist caught leaking could be subject to criminal prosecution and civil liability, as well as removal from office.

Although Vassallo adamantly refuses to call the inquiry an investigation, she says there is a serious issue at stake, beyond freedom of the press. The seven-member citizen review board, created in 2001 by the city's contract with the union, offers the public unusual access to police files, she notes. Any breach of the confidentiality agreement could endanger its future. "This isn't about giving information to the press, it's about the integrity of the process," Vassallo said. "If we didn't have this contract, we would never have citizens looking at police files."

Noll is expected to start his fact finding this week. He will have no subpoena power and no ability to coerce subjects to talk, other than asking polite questions. His contract is capped at $12,000, although Vassallo says she doubts it will cost that much. She expects him to wrap up his noninvestigation by January.

But a perfunctory fact-finding exercise may not appease union officials. (APA President Mike Sheffield could not be reached at deadline.) "The association expects the City Manager to devote the same attention and resources to this investigation of public misconduct that the City devoted to the investigation into the death of Commander Jacobson in an off-duty motorcycle accident," the association wrote in the Nov. 7 memo to the city manager, referring to the wreck one year ago that killed APD Cmdr. Shauna Jacobson and retired APD detective Kurt Jacobson, apparently the result of drunken driving and which raised questions of whether other APD officers should have stepped in to prevent it. (An investigation eventually found no evidence of wrongdoing on the other officers' part.)

The APA memo describes the leak as a "blatant attempt" to put "political pressure" on Chief Stan Knee to follow the panel's recommendation. Case in point, according to the union, is the way the Statesman handled the leak. In a Nov. 6 editorial – 10 days before Plohetski's story ran, but two days after he called the union for comment – the Statesman editors wrote "we'll see" if the police chief follows the panel's recommendation, without mentioning that a Statesman reporter already knew the panel's verdict.

According to the APA's memo, "it is beyond credulity" to think the Statesman would have made such a statement if it didn't already know the panel's vote. "Forearmed with the panel's recommendation, the Statesman was free to exert its own form of political coercion" to get Schroeder fired, the memo says.