Good Will To All ... Except the Homeless

Hard to believe (impossible, actually), but council is taking yet another week off today – in its place is the inaugural meeting of the city Petula Clark Fan Club, coincidentally composed of all your Austin council members (though the inside word is that Brewster McCracken was pushing for Peggy Lee). It should culminate in a prime-time sing-along of Clark's smash hit "Downtown" – only fitting, as that's where the lonesome drifters on the council have had their heads stuck for most of the year. "Downtown! Things'll be great when you're – Downtown! No finer place for sure – Downtown! Everything's waiting for you!"

But maybe they should pay closer attention to the lyrics following that initial, soaring chorus – "Don't hang around." The lengthy agenda includes a brace of stocking stuffers for the area (which if unabated on its current path of wine bars and postmodern furniture purveyors by the gross, might soon be rechristened Arboretum South): reimbursements to the AMLI group for installation of "Great Streets" benches, chairs, and bike racks along the "destination" Second Street storefronts (No. 5 and 6); bucks for a Seaholm transit-station study (No. 7); and a resolution allowing for the integration of the area into a more cohesive zoning area (No. 56, Downtown Austin Redevelopment and Transit Strategy).

But the most dramatic and controversial proposal for Downtown's lifestyle future is innocuous little action Item No. 17, the city's "Public Order" ordinances. Now reviewed in two separate public hearings – most of which took place during witching hours long after exhausting marathon discussions of other ponderosities, like the Spring Condos – the ordinances are scheduled for a final vote and – uncertainly – approval. Modeled after similar language in resolutions elsewhere that have withstood legal challenges, the four ordinances, in tandem: prohibit "aggressive solicitation"; ban panhandling near schools and restaurants, and in Downtown from 7pm-7am; prohibit sitting, lying, or sleeping on Downtown public sidewalks; prohibit door-to-door solicitation from 7-9am; and expand a ban on solicitations by pedestrians of motor vehicle occupants, throughout the whole city.

While the alphabet soup of Downtown boosters – the Downtown Austin Alliance, the Downtown Austin Neighborhood Alliance, etc. – has stirred up support of the measures, opposition has registered from some unexpected quarters. Foremost has been opposition to the car solicitation ordinance from Austin's day laborers, who say it makes looking for work illegal. Tuesday, the Religion and Labor Network of Austin and the Central Texas Immigrant Workers' Rights Center sponsored a City Hall candlelight vigil against the laws. With the wording possibly vague enough for a legal challenge, and the issue weighing on council's mind (today, council also remembers to re-establish a years-dormant day labor advisory committee), if any ordinance has a chance of failure, this is the one.

The door-to-door solicitation ban has also drawn the ire of local activist groups, some of whom use that method for both fundraising and organizing. The board of Liveable City this week called for rejection of the ordinances, pointing not just to the day laborers but to the "unintended consequences" to election fundraising, voter registration, and petition-gathering. Should such practices continue unimpeded while the ordinances are selectively enforced against the destitute, say opponents, we will effectively criminalize homelessness. Today we'll find out if council has conceived any other solutions to the real problem of homelessness, not just in the Central Business District – or instead keeps whistling the same old tune.

Elsewhere on the massive agenda (bloated as St. Nick coming down from an eggnog bender), are new coats and britches for the firefighters (No. 35), and new rides for the traffic cops from Lone Star BMW-Triumph (No. 37). The Thin Blue Line is making out especially well this Christmas, as several new APD programs are also slated for approval and funding: participation in an Internet crimes against children task force (No. 14), Project Safe Neighborhoods (No. 15, anti-gun violence), and services for victims of domestic violence (No. 16).

But the gift that keeps on giving is the Champions zoning saga, the three Northwest tracts at 2222 and Loop 360 slated for rezoning approval (raising vehicle trip limitations) on second and third readings (97-99). Slated being a tentative word – Tract 3 has a valid neighborhood petition against it, requiring a 6-1 supermajority (effectively for all three tracts) to approve the more permissive zoning owners want. With two nays already cast last meeting – in a 4-2 approval, with the four ayes hardly enthusiastic – still looming is a likely New Year resumption of the Champion sisters' never-ending lawsuit against the city.

It's the most wonderful time of the year! 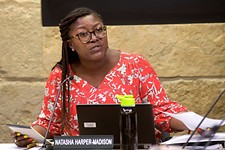