'In the way' of violence 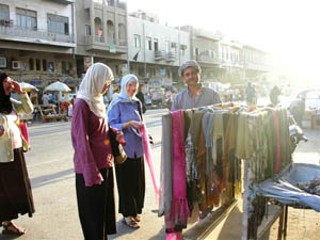 Female members of the Christian Peacemaker Teams shopping at the street vendors in Karrada, Iraq. They are wearing now-typical Iraqi women's garb, so as not to stand out. (Photo by Charlie Jackson)

Dec. 10 has passed, and with it a foreboding deadline: Liberate all detention centers in Iraq or mourn the deaths of Tom Fox, Norman Kember, James Loney, and Harmeet Singh Sooden, four members of the human rights group Christian Peacemaker Teams. As of press time Wednesday, there has been no word of the men's fate, nor has there been any direct contact with the kidnappers, a previously unknown group referred to as both the "Swords of Righteousness Brigade" and the "Swords of Truth."

Despite the kidnappings, the Chicago-based CPT remains firm in its peaceful convictions. "We reject the use of violent force to save our lives in the event we are kidnapped, held hostage, or caught in the middle of a violent conflict situation," reads the CPT Team Statement, which team members are asked to acknowledge before they head into dangerous territory. "We also reject violence to punish anyone who has harmed us."

Initiated by Mennonites, Brethren, and Quakers in 1984 as a call for Christians to devote the same discipline and self-sacrifice to nonviolent peacemaking that armies devote to war, CPT members have gone all over the world, including Bosnia, Haiti, and Chechnya, putting into practice the group's motto, "Committed to reducing violence by getting in the way." The CPT-Iraq team has maintained a consistent unarmed presence outside the Green Zone since October 2002, with the intention of seeing that the basic needs of the Iraqi people are met while the country was under U.S. attack and now occupation.

"There is fighting going on every day, and the Iraqis really don't have the medical supplies needed to address the casualties," says Texans for Peace founder Charlie Jackson, who has been a part of three CPT delegations since 2002 and knows both Fox and Loney. "Some of the team members went to Fallujah the week before the kidnapping to see what the current conditions were like [and] to see whether the reports that were coming out were accurate." In an e-mail update, Jackson says the members reported that, during their visits, the only supplies received from the U.S. were kerosene heaters and blankets. For the record, the Fourth Geneva Convention specifically requires that the "occupying power has the duty of ensuring the food and medical supplies of the population" and "maintaining, with the cooperation of national and local authorities, the medical and hospital establishments and services, public health and hygiene in the occupied territory."

CPT is also actively focused on the growing detainee population in Iraq. In January 2004, CPT published a report on 72 cases of detention they had investigated, which became the first systematic coverage of abuse by U.S. forces. In addition to what Jackson describes as "going to the prison to get information regarding a certain family member who has been taken away," he and his colleagues continue to interview former detainees and document possible human rights abuses. One young Iraqi man whom Jackson interviewed was shuffled between Camp Bucca and Abu Ghraib for nine months before being released. Jackson says the young man was actually working as a translator for the U.S. military before they detained him. "He said that in the prisons, they take just ordinary men off the street, preachers and shop owners and people like that," Jackson recalled. "It's an ongoing problem, because, certainly, there are criminals in prison, and even fighters that they've captured, but there are plenty of ordinary people who get swept up and put in prison." Though the young man with whom Jackson spoke had not suffered any torture while detained, CPT has heard firsthand accounts of torture in both U.S. and Iraqi-run detention centers.

The work of the CPT extends beyond the official domain of hospitals and prisons, and is welcomed into neighborhoods and homes and schools. According to a report released Dec. 8, CPT-Iraq recorded testimonies from Iraqis who "spoke of destructive house raids in which U.S. soldiers arrested relatives, stole valuables and family documents. One man testified that U.S. soldiers raided his home, destroyed his belongings, and killed his 15-year-old son. Two days later U.S. soldiers admitted that they had raided the wrong house."

"There needs to be a force that counters all the resentment, the fear, the intimidation felt by the Iraqi people," CPT member Peggy Gish said in a statement released shortly after the kidnapping of her colleagues. "We are trying to be that force, to speak for justice, to advocate for the human rights of Iraqis, to look at an Iraqi face and say: 'My brother, my sister.'"

*Oops! The following correction ran in the December 23, 2005 issue: The photo that ran last week with "Christian Peacemakers: 'In the Way' of Violence" was credited to Christian Peacemaker Teams. The photo was actually taken by Texans for Peace founder Charlie Jackson. The Chronicle regrets the error.