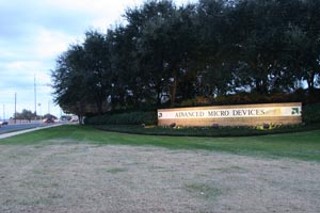 A new $230 million office campus at Southwest Parkway and West William Cannon Drive in Southwest Austin, known as the Lantana tract. The property is just outside the recharge zone (and within the contributing zone) of the Barton Springs Edwards Aquifer, and within the city's Drinking Water Protection Zone. Construction on the first three of five buildings is expected to start in March 2006, with some 2,000 employees moving to the campus in mid-2007. The complex could eventually house nearly 3,000 workers.

About 1,000 employees of AMD's less-profitable flash-memory unit – Spansion – will remain at the company's Fab 25 complex on East Ben White (see photo below). Plans call for Spansion to spin off as a public company; an initial public offering was scheduled to take place this week.