Silicon Labs to Move Downtown, Out of Watershed 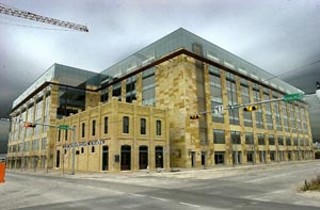 Silicon Labs will buy the CSC building in the block west of City Hall.

You know times have changed when the words "environmental concerns" or the like aren't mentioned, at least publicly, as a factor in Silicon Laboratories Inc.'s decision to move out of the Barton Springs watershed and into downtown.

But both the Save Our Springs Alliance and developer Beau Armstrong, who says he came "very, very close" to sealing a deal with the company in Southwest Austin, agree that the company's decision to move downtown was in part due to concerns about expanding in environmentally sensitive terrain.

The Austin computer chip company announced plans last week to buy one of two buildings owned by Computer Sciences Corp., the one just west of City Hall. Silicon Labs has signed a letter of intent to buy the six-story building while continuing to lease existing space and maintain a presence in Southwest Austin through 2009. The company is expected to begin moving some of its 500 employees to the CSC site in mid-to-late 2006. The building comes with a 99-year ground lease with the city. Silicon Labs will also seek some form of tax incentives from the city as part of its move downtown.

The CSC buildings are the product of a city-inspired deal that started in the late Nineties to lure CSC downtown instead of locating at the Terrace office complex southwest of Zilker Park and Barton Springs Pool. Some six years after CSC's celebrated decision, which was helped along with a handsome incentives package, another watershed debate has erupted over Advanced Micro Devices' plans to build a new campus on the Lantana tract off of Southwest Parkway. Lantana, a 500-acre mixed-use development, is also where Silicon Labs currently leases about 140,000 square feet of space, and where it was in negotiations with Armstrong to expand up to 500,000 square feet of office space over the next seven to eight years.

But in late summer or early fall, Silicon Labs unexpectedly switched gears and began looking for a site downtown. "We got very, very close to a deal with them," said Armstrong, chief executive officer of Stratus Properties, which owns Lantana. "But [board Chairman] Nav Sooch decided that, from his standpoint, he'd be better off running his business downtown, and I respect that." Armstrong said he was informed that Silicon Labs had met with Save Our Springs Alliance leaders before deciding to halt negotiations on the Lantana site. "I was disappointed because we'd worked hard to try to keep them, but I understand," Armstrong said. "I was made aware of [the SOS meetings], but not until after the fact. I would think that that probably played some role in the decision."

He continued: "Nav Sooch is a very thoughtful guy, and I think that [the watershed location] was something he was concerned about. I think also that he needed to be in a different environment to be able to attract the kind of people he's trying to attract."

With Silicon Labs' decision to look outside of Southwest Austin, Armstrong then talked to the company about becoming a tenant in his Block 21 project, a multiuse development in the works north of City Hall and an important jewel in the city's plans to turn this area of downtown into a vibrant destination district.

While not specifically addressing Block 21, Mayor Will Wynn, responding Monday by e-mail while on an economic development trip to New York City, said he also discussed a downtown move with Silicon Labs officials. "I extolled the virtues of downtown Austin to Silicon Labs executives frequently, and continue to do so," he said, adding that he even chatted up downtown to company officials while running in Silicon Labs' July 4 marathon relay. "I work hard at developing and maintaining key relationships with the executive teams of Austin employers. Not all corporate decisions are based on incentives."

Because Silicon Labs expects to eventually outgrow the CSC building's 175,000 square feet (36,000 of it occupied by other tenants), Armstrong says the company could still end up on Block 21. "It's still possible, but they have a number of expansion options downtown," he said. "Every real estate guy with blood pumping through his veins is trying to talk to them about anchoring their project."

Apparently pivotal in Silicon Labs' decision to pull out of Southwest Austin were two meetings the homegrown technology company had earlier this year with the Save Our Springs Alliance. (Company executives also met separately with a retired technology executive and an Austin developer, both of whom asked not to be identified because they prefer to work through private channels to discourage companies from locating in environmentally sensitive areas.) The first meeting, in mid-March, included Silicon Labs' former Chief Executive Officer Dan Artusi, Chief Financial Officer Russell Brennan, and Director of Corporate Communications Shannon Pleasant, and, from SOSA, Bill Bunch, Colin Clark, and board Chair Dick Kallerman. Bunch and Clark said they provided a general overview of the watershed area and gave the executives a map of the aquifer and other documents as back up material. "We walked through the science of protecting the aquifer, gave a history of the SOS ordinance and the Smart Growth policy about steering people into the desired development zone," Bunch said. "They were very open and they asked a lot of questions."

In July, Silicon Labs' Pleasant requested a follow-up meeting and met with Bunch and Clark at the SOS office. "[Pleasant] came back to us with specific questions about the eco-location map. She really wanted more information to help make an informed decision," Clark said. "At that point," said Bunch, "it became clear to us they were seriously looking elsewhere, because she was reaching out for more information." Company's decision to move was partly due to concerns about expanding in environmentally sensitive terrain.