The Bloodthirsty Killers of Circle C Bexley Road looks like any other street in Circle C, a gentle curve lined with tall homes of limestone and brick. The garage doors are all neatly closed, and not a blade of grass grows taller than six inches. But don't let the calm, uniform, even antiseptic appearance fool you: Bloodthirsty killers are on the loose.

"They hide in my thickets," said concerned resident Susan Schaffel, sitting in an arbor built of cedar logs and surrounded by thick stands of sage and holly. "They lay low, they creep, and they lunge."

The killers in question have whiskers, self-important attitudes, and names like Miss Princess. They are, in short, her neighbors' cats, which roam the otherwise peaceful cul-de-sacs in search of prey. An estimated 150,000 feral cats – wild, unowned creatures – also lurk in central Texas. While reptiles, amphibians, and insects all fall to their deadly claws, the victims that Schaffel most mourns are birds. Schaffel doesn't only mourn, she acts, and some of her actions have others in the Circle C Ranch and animal communities aflutter. While everyone involved seems to have a species to blame, the spat raises serious issues of how native and intruder species can coexist in profoundly unnatural landscapes.

Like most new subdivisions, the homes in Circle C are surrounded by tall privacy fences that allow each resident to craft a backyard utopia. For some, that means a St. Augustine lawn as smooth and green as a shamrock shake. For Schaffel, it's a thick wildscape of native trees and shrubs enclosing a paisley-shaped patch of turf. In one corner is a pond, in another are strawberries and basil, and above it all hang the bird feeders, more than a half-dozen of them. There's peanuts for the cardinals, suet for the wrens, and high in the air, a tasteful white mansion, in miniature, for the purple martins. The entire yard is designed to draw birds to her yard like hungry truckers to Waffle House.

It works. Showing off her handiwork last Wednesday, Schaffel was surrounded by little grey and sulphur butterflies dipping into the lantana blossoms, and berry-munching wrens rustling through the undergrowth. The blond-haired, flip-flop-clad Schaffel, who looks a solid decade younger than her AARP-eligible years, kept up a steady burble of "Look at that butterfly! Isn't that awesome? Look at how stunning this is!" at each flutter or flit. But with God-knows-how-many house cats and feral cats perpetually on the prowl, the birds flit at their own peril. Schaffel is sick of it. Actually, she's been sick of it for years – in 2001 she led a failed effort to pass a cat leash law in the city of Austin, and she says in her five years as a Circle C resident she's personally trapped 18 cats, which she delivered to Town Lake Animal Center to slay no more. (One of those cats she trapped on multiple occasions; the neighbor who owned it paid repeatedly to reclaim it but did not stop letting it outside.) Her latest battlefront, however, is trying to convince the Circle C Ranch Homeowner's Association to enforce its own rules.

"You read our bylaws and it clearly states that animals need to be contained on your property – ... Mockingbird!" Schaffel interrupted herself and dashed over to a corner of her lot where a small grey bird was indeed rustling around in her yaupon. The bylaws she refers to are the Circle C covenants, 20 pages of rules and regulations that govern what, when, and how you may build and behave in the master-planned community. In addition to prohibiting visible swing sets or solar panels, basketball nets, oil-drilling operations, mobile homes, and "stylistic ornamentations or details that are out of character with the community image," Circle C's covenants are clear on the issue of free-roaming animals: dogs and cats cannot leave their owners' property without a leash. Unfortunately for Schaffel, the community may have an Architectural Control Committee, but it has no animal control committee – meaning the felines flout the rules with impunity.

Steve Urban of the CCHOA board of directors doesn't see it as quite so insane. "I think with all the other things we have to do in Circle C, the last thing I want to do is patrol neighborhoods and look for cats on leashes," he said. What could be more important than the wholesale slaughter of our beaked buddies? There's pool maintenance, transportation issues, the garbage contract, school construction, "and regular run-of-the-mill covenant violations," said Urban, such as "people not mowing their lawns or painting their house bright orange."

Urban isn't the only neighbor who fails to grasp the enormity of the situation. When Schaffel tried to rally the troops on the HOA online forum, only one other resident enthusiastically took up the cause. Others questioned her methods (i.e., the traps), while one man wondered whether birds really enhanced the community image, what with the poop on the cars and such. Urban agrees that birds have their downsides. "Some folks behind me have this big birdhouse," he said. "Every morning at 6am they're out there chirping and driving me crazy."

Come and Get It

Whatever your position on chirping or guano, Schaffel's concerns have merit. An oft-cited study from the University of Wisconsin (the state that last year considered legalizing the hunting of feral cats) estimates that some 100 million cats roam outdoors nationwide, killing hundreds of millions of birds each year. According to the American Bird Conservancy, which along with the Humane Society and the American Humane Association is running a "Cats Indoors!" campaign to convince pet owners to corral their kitties, some four dozen cities and counties have passed laws requiring cats to remain on owners' property. Cliff Shackelford of Texas Parks & Wildlife says that the agency considers cat predation a problem, but they can't do much about it. "We're concerned with it, but we don't have much jurisdiction over nonnative species," he said, adding that regulation would typically be a municipal or county matter.

Cats are only one of the challenges facing the modern bird, what with all the cell phone towers, wind turbines, and enormous, confusing picture windows in the McMansions sprouting up like bluebonnets in March. And one of the biggest problems is that those McMansions are sprouting up right where those bluebonnets (and other native species) used to grow. The American Farmland Trust estimates that nearly 200,000 acres of rural land in Texas is developed each year, destroying nesting sites and food sources. That's why TP&W and nonprofits like the Ladybird Johnson Wildflower Center, just across the road from Circle C, consider backyard cultivation of native plants – as Schaffel has done – a virtuous and important pastime. It's also attractive and easy, said Heather Venhaus of the Wildflower Center. "The most important thing to do is define what species you want to attract, and then put in the food source, and make a home for that species," she said.

In short, if you want to bring animals to your yard, give them something they like to eat. For example, if you wanted to attract Felis catus, you might offer them thickets to hide in, a tasty array of cardinals and wrens, and perhaps a nice tin of tuna oil in a Havahart trap. This makes Circle C resident Ed Scruggs wonder whether Schaffel isn't simply creating her own problem. "It's like a buffet for the cats," he said of her yard. Scruggs says he's seen "maybe three" cats in his own neighborhood, and considers an entirely different species the bane of the bird feeder. "We have more problems with the squirrels than we do with the cats," he said. "They dangle with their back legs and get in somehow."

In short, one person's beloved species is another person's bête noire, and action on behalf of one species nearly always has implications for others. Just as bird-o-philes complain loudly about cats, there are butterfly and dragonfly aficionados who grumble about those vicious, monarch-munching purple martins. All in all, it's just a big, bloody smorgasbord out there at Circle C, with too many species competing for the same, profoundly altered landscape. The question, then, is how to best provide for the most species in places where "nature" doesn't really exist, and where different people's priorities, pet causes, and pets come into direct conflict.

While human impacts on the environment are often impossible to undo, much could be done to better manage our cats. The question is what that might be. Feral cat advocate Missy Morgan agrees that the cats can't be blamed for trespassing at the Schaffel House Birdie Buffet, but she would nonetheless love to see fewer felines on the loose. Morgan, who keeps 28 formerly feral cats in her (non-Circle C) 800-square-foot house ("I don't recommend it"), favors trapping and sterilizing them (as well as passing an ordinance requiring Austinites to spay and neuter their pets.) "There are many people who would help [Schaffel] to trap, neuter, and release," Morgan said, "but she's on a rampage of luring neighorhood cats into her yard by offering them tuna, getting them in traps, and taking them to Town Lake to have them killed."

Schaffel opposes TNR (trap/neuter/release) programs because a sterilized cat will still kill; also, despite her reputation to the contrary, she says she no longer traps cats. In any case, doing the same for every free-roaming cat would be a practical, as well as political, impossibility.

The dilemma, then, is deep: Texas desperately needs more wildlife habitat, but because such good wildlife habitat is also good cat habitat, such efforts bring mixed blessings to native species. Efforts to destroy ferals or force people to confine cats are bound to be unpopular. For the time being, then, bird lovers have no choice but to try to educate their neighbors and to get creative. Shackelford traps cats, but rather than delivering them to a shelter, he hoses them down and lets them sit in the cage long enough to realize that life is more pleasant when they stay out of his yard. (He acknowledged that this is not official TP&W policy.) The Wildflower Center uses traps, and also benefits from the circle-of-life method of cat control. "We also have coyotes," said Venhaus. "That also takes care of the cats."

However, nobody wants to see the cats as snacks, least of all Schaffel. She says her campaign to keep pet cats indoors is as much about protecting cats from cars, catfights, coyotes, and kids with .22s as it is about the birds. A growing market of products exists to allow cats outdoor fun without endangering themselves or others, from screened-in enclosures to special cat-proof fences. The city of Austin, through the Town Lake Animal Center, also encourages cat confinement and has helped Schaffel fund the printing of 15,000 brochures on the benefits of keeping pet cats inside. Because pet cats are only part of Austin's cat problem – many of the roughly 13,000 animals killed at TLAC last year were litters of feral kittens – the city also encourages and helps fund TNR programs. As with any animal problem, however – be it cats, birds, coyotes, or those dastardly squirrels – TLAC director Dorinda Pulliam says the real problem is the people. 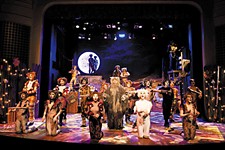