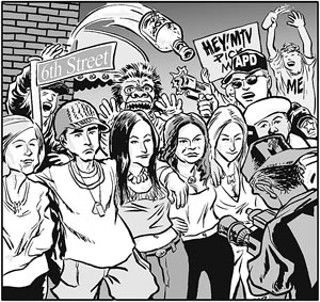 On the night he was arrested for misdemeanor assault, The Real World cast member Nehemiah Clark was hounded down Sixth Street, a media beast fleeing packs of jeering thugs and MTV cameras, his attorney says. Hoping for a brief moment off camera, he stumbled from bar to bar, tormented, searching for a moment of peace.

And … well … yadda yadda yadda … he ended up, allegedly, accidentally bitch-slapping the dude at the Best Wurst stand.

Hey, these things happen in the alternative reality of The Real World, which has quite a bit to say about modern culture, media manipulation, and human sexuality – for anyone interested in sifting through the empty beer bottles and used condoms. If criminal cases are any indication, the Austin gang was a stellar band of overachievers. Tens of thousands of drunken students descend on Sixth Street every year, but these seven managed to produce three arrest reports in three months, which is, as they say, not bad.

Clark is due in court Dec. 5 on a pretrial hearing, although his attorney, Kristin Etter, believes the matter will be resolved soon. The vaunted MTV cameras, there to capture every real nuance, missed the confrontation, she said, depriving Real World fans of another classic real moment of real drunken violence.

Already a Hall of Fame classic is the scene of cast member Danny Jamieson getting his face pounded on Sixth Street, an incident which led to the arrest of Ryan Getman, 29, on charges of aggravated assault. Getman's case is winding through the system; a hearing last week was rescheduled. Meanwhile, "fiery Peruvian" cast member Johanna Botta is free and clear after paying her debt to society over a drunken episode involving an accusation she stole a rose from a street-side stand. After pleading no contest to public intoxication – a wise move, all things considered – she worked 16 hours of community service and attended an alcohol education class, even though she already seemed to know quite a bit about alcohol.

The MTV cameras caught a snippet of Botta's arrest, but it's clear the show provided only a brief glimpse of what it was really like for the "seven strangers" plopped into the middle of downtown Austin with ready cash, cheap liquor, and an entourage of camera crews. MTV has created these little Real World operatic pieces for 16 years now, and any concept of depicting reality was long ago jettisoned in favor of watching exhibitionist binge drinkers react to the opportunity to act like sleaze-hos on national TV.

By all accounts, the Austin cast practically lived on Sixth Street, moving from club to club, seeing what they could stir up with cameras, production money, and a few bright lights. After Jamieson's altercation, the entourage included off-duty Austin police officers, hired to provide security for the TV crews.

Needless to say, the gang was hard to miss when they entered a club, especially when the cast members were falling down, blithering drunk, which was fairly often, based on what was shown on TV. They were eager to interact with locals, especially those interested in boinking someone on national TV. According to all reports, tensions often ran high. At times, it was clear the cast members "wanted to be treated a certain way," like stars, said Ben Cantu, general manager of Blind Pig Pub.

As they trolled the streets, their movements were breathlessly tracked by die-hard fans. They would often be seen ducking into bars and racing to get away from the cameras. On RealWorldAustin.com, a site devoted to all things Real World, a member named "JLR" described one of Nehemiah's earlier altercations. "People were screaming this is the REAAAAL WORLD and f**k the real world and go home get out of Austin," JLR wrote on the site. Another poster described following the cast, trying to take pictures. "I pulled around the block and saw them at 4th and San Jan where Nehemia gave me his opinion of my picture taking," "drycreek" breathlessly reported. "I found a parking spot on 7th and located them at a pizza shack across from Touche. About 9:40 they headed down to Spill."

At one point, worried that somebody was going to get hurt, APD officers providing security asked the cast members not to engage the crowds trying to harass them, according to Mike Sheffield, president of the Austin Police Association. "Our advice was to learn to walk away," Sheffield said. "I don't think they took the advice at all." Sheffield says the off-duty cops were unaware that two of the cast members – Clark and Wes, "the frat boy" – were underage. (According to Sixth Street bartenders, both were using fake IDs.) "We were there for the film crew," Sheffield said.

Clark's experience the night he was arrested provides a glimpse into life as a reality TV celebrity. Clark – in anguish over having to finish an edit of a short documentary on South by Southwest, as all true fans know – apparently managed to elude both the cameras and his police escort. "He just wanted to be left alone," Etter said. But a group of men followed him from nightclub to nightclub, threatening him and muttering racist remarks. "People will do anything to be on television," Etter said.

That's how it was for the lovable gang of drunks as they wandered the streets with light crews and boom mics. People would throw things from windows and yell curses at them, Etter says. "They were constantly under attack, both verbally and physically." The cast "always had to be on the defensive," with the lights operating like magnets for the Sixth Street crowds, she said.

Little of that was shown on TV, however, as MTV portrayed the youngsters as sage philosophers, walking among us to share their wisdom. "Actions speak louder than words," Clark said after apologizing on-camera to the Best Wurst guy, sounding like a shaman for his generation. The next episode, Yoda Clark was heard imparting upon a housemate the ancient wisdom of "Don't put your hands on me, bitch."

According to his attorney, Clark is now directing music videos and delivering "motivational" talks on drug and alcohol abuse – tidbits of news that will certainly send a million blogs atwitter.

Meanwhile, The Real World gang has moved on to Key West, where they're making new friends. A neighbor sued over the noise and lights from the house, and last week a crew member was punched in the face outside a bar. According to a local newspaper report, the incident "caused such a large crowd to gather that traffic was stopped in both directions."