FEMA's new Dec. 1 cutoff deadline for picking up the tab of hurricane evacuees living in Texas hotels and motels leaves thousands of people in housing limbo 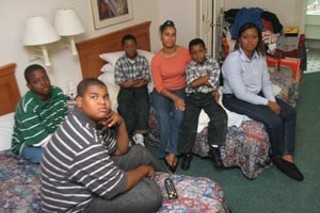 New Orleans native Jaren Diaz (left) and his family occupy three rooms at the La Quinta Inn on East 11th Street. His mother, Donna (third from right), says she would like to stay in Austin if she can find an apartment for her and Jaren before FEMA stops paying for Katrina and Rita evacuees to stay in hotels and motels. The agency extended the cutoff deadline Tuesday from Dec. 1 to Jan 7. (Photo By Jana Birchum)

The guests of the La Quinta Inn at 300 E. 11th start trudging into the breakfast room for complimentary chow around 6am on weekdays, 7am at the earliest on Saturdays and Sundays. Among those trickling in last Saturday was 14-year-old Jaren Diaz, one of several Hurricane Katrina evacuees from New Orleans occupying 30 rooms at the hotel. He's staying with his mom, two sisters, and three nephews in three rooms until the morning of Dec. 1 at the latest, at least according to FEMA. On Nov. 15, the Federal Emergency Management Agency abruptly announced that Nov. 30 is the last day it will pay for the hotel and motel rooms of Hurricane Katrina and Rita evacuees in Texas. As Diaz put it, "About two weeks, we have to pack up and get out."

Diaz stood at the self-serve breakfast counter, baggy red athletic shorts dangling to just below his knees, and loaded up a foam plate with the likes of cereal, waffles, and packaged cinnamon rolls. Many of the evacuees who came down for breakfast were either getting food for someone in addition to themselves or working on their own stockpile. Diaz, however, only got food for himself – his mother, Donna Diaz, said she didn't want anything. Donna, who has fibromyalgia, a chronic, painful musculoskeletal condition that makes it difficult for her to get around, was upstairs in their room.

Ever since she learned of FEMA's hotel and motel assistance cutoff date, Donna has wavered between two options: trying to find an apartment in Austin, or going to Baton Rouge, where her daughter, who lives in an apartment complex, has gotten assurance from her landlord that there's a unit available for Jaren and Donna. Donna is torn about the prospect of yanking Jaren out of his new community, a huge part of which is Kealing Middle School in East Austin. "That's the only thing that's really pressing on me. He likes the school and I really hate to take him away from it," said Donna, adding that her family finds Kealing to be a lot better than the public schools back home in New Orleans' Ninth Ward.

According to the Governor's Division of Emergency Management, about 54,000 Hurricane Katrina and Rita evacuees are estimated to still be staying in hotels and motels across Texas. According to the Basic Needs Coalition of Central Texas, a public-private collaboration of 23 local organizations focused on community issues, there are about 500 evacuee households still in hotels in Travis Co. The coalition has been expressing concern for a while about not having the resources to adequately accommodate the area's evacuee population. Now coalition members are really worried. Come Dec. 1, "these people are going to end up on the street or they're going to end up coming to all the doors of all these social services agencies and we're not going to be able to help them," said Susan Eason, executive director of the coalition.

Evacuees staying in hotels and motels aren't the only ones area service providers are worried about. The FEMA announcement also included a new Dec. 1 deadline for all rental contracts made through public assistance programs and a complete end to all evacuee housing assistance funding March 1, 2006. Governor Rick Perry sent a letter Friday to acting FEMA Director David Paulison appealing to the agency to extend the hotel/motel deadline to March 1 and the housing assistance deadline to June 1. Paulison said in a press briefing Tuesday that FEMA will extend the hotel/motel deadline to Jan. 7 on the condition that the state provides a plan for meeting the deadline.

Far removed from D.C., Euclid Taylor, a 42-year-old Bourbon Street tarot card reader who used to live in Algiers, was betting Saturday that FEMA would extend its hotel/motel deadline. "That's really screwed. They have to back down," said Taylor, as he spread cream cheese on his toast at breakfast. A native of Chicago, he said he doesn't know where he'll move next.

La Quinta General Manager Allen Bright was betting on Monday that FEMA would back down, too. "There's a rumor, a real strong rumor, that there's going to be an extension, said Bright, adding that he plans to comply with whatever deadline FEMA ultimately gives, but that he really hopes it's not Dec. 1. "It's really going to put the hotels in a precarious predicament if they leave it up to us. We're also very sensitive to the needs of these people," he said.