Democratic Disagreements and the Election

What will county election results mean for local Dems? 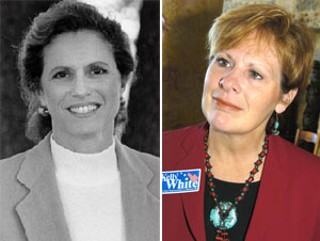 Kelly White (r) is Donna Howard's treasurer in the race for House District 48, but she's considering entering the race herself. (Photo By John Anderson)

Will Travis County voters do to Republicans in 2006 what they did to Proposition 2 last week?

The answer you get depends on who's doing the handicapping. Democrats believe they can parlay the county's election results into victories in two Republican-controlled House districts – HD 48, where voters rejected Prop. 2 by more than 58%, and HD 47, where the measure failed by just 589 votes. At the same time, they hope to hold onto Rep. Mark Strama's HD 50, where the majority of voters supported the marriage amendment.

On the other side of the debate, local GOP leaders insist that last week's election numbers will be long forgotten by the time the 2006 election rolls around. "The results won't have any bearing on future races," Travis Co. Republican Chairman Alan Sager predicted. "So Travis County defeated the amendment. Yippee."

It's hard to tell whether the defeat of Prop. 2 locally is a reliable gauge of what will happen a year from now. It's no secret that voters in HD 48, which takes in much of West Austin and northwest Travis Co., were poised to oust Republican Rep. Todd Baxter for casting votes in favor of private school vouchers and redistricting, among other measures which his constituents staunchly opposed.

But Baxter has since resigned from office, to be replaced on the GOP campaign trail by wealthy business leader Ben Bentzin. This is Bentzin's second run for office, and while he lost a senate bid against Gonzalo Barrientos in 2002, he carried HD 48 by 7,388 votes.

The Baxter-Bentzin surprise switcheroo last month sent Democratic operatives into a tailspin, and dissension among the troops over which of the three announced primary candidates – Andy Brown, Donna Howard, or Kathy Rider – would be better suited to challenge Bentzin in a special election, which Gov. Rick Perry has yet to schedule. Other Dems argued that the only way to win a special election would be to send in a known candidate like Kelly White, who narrowly lost to Baxter in 2004. This proposal caused consternation in Howard's camp because White is Howard's campaign treasurer, but White supporters stood their ground, arguing that she has greater name ID and a knack for raising huge sums of money, a talent she honed as the former executive director of SafePlace.

"People wanted to immediately start cutting deals," said one Democratic consultant of the flurry of discussions that followed Baxter's announcement in late October. In the end, no deals were cut and things are left hanging. "There's no reason to wheel and deal now because we don't know what Perry is goingto do about calling a special election," said the consultant.

White had initially said she would run only if she were the designated unity candidate, meaning Brown, Howard, and Rider would voluntarily bow out of the picture. That didn't happen. And Howard's camp, for one, was particularly angry that White would even consider jumping into the race just days before she was to host a Howard fundraiser.

Any ill will that grew out of the closed-door discussions may simmer for the time being. But White says she won't make a decision on a special election until Perry sets a date.

One thing the Dems do agree on is that the district's sound defeat of Prop. 2 is a good sign for their side. "Ben Bentzin is clearly out of step with the district he wants to represent, just as Todd Baxter was," said David Butts, a Democratic consultant who favors a Kelly White candidacy in the special election. Kelly Fero, a Howard consultant who's against White entering the race, says the Prop. 2 results bear out local voters' dismay with GOP leadership on bread-and-butter issues. "Austin voters, especially in HD 48, demonstrated that they want their candidates to put down the boxing gloves and get the job done," Fero said.

Fero says he sees the same voter sentiment in HD 47, in southwest Travis County, and HD 50, in the northeast. "The voter frustration isn't angry, and it isn't partisan. It's about getting the job done. Whoever can communicate that ability best in HD 47 will win, Democrat or Republican. In HD 50, [Strama] is the overwhelming favorite," Fero added – though Republican anti-tax activist Don Zimmerman, who campaigned heavily for Prop. 2, has mounted an ambitious bid for the seat, and former Rep. Jack Stick, who lost to Strama in 2004, is considering making a comeback attempt.

Sager, the Travis Co. Republican chair, said voters have strong choices among the field of GOP candidates running in HD 47, but he was less forthcoming about the HD 50 lineup, noting that he's still talking to potential candidates. He and Zimmerman don't see eye to eye on many fronts. "I respect what Don does," Sager said. "But for me, the question is who can win in this district."