Instant Replay: How and Why Did Daniel Rocha Die? 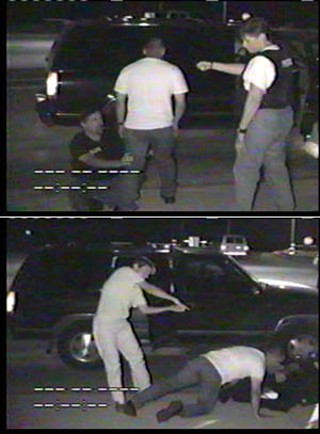 Top: APD Sgt. Don Doyle told police investigators that he was focused on trying to hold onto Rocha's leg when he heard a "pop" that he thought was a Taser firing. When he looked up over Rocha's right shoulder he says he saw only part of the muzzle of a pistol. Bottom: During her re-enactment, Officer Julie Schroeder said that after realizing her Taser was missing from a pocket in her police vest she pulled her weapon and fired one shot into Rocha's back as he lunged toward Doyle.
Photos courtesy Austin Police Department

Attorney Bobby Taylor says his client Daniela Rocha still doesn't know what happened in the last moments before her son, 18-year-old Daniel Rocha, was fatally shot by APD Officer Julie Schroeder on June 9 – even after reviewing a tape of the official police re-enactment of the shooting, recorded not quite 24 hours after Rocha's death. Specifically, Taylor charges that Schroeder's re-created recollections don't match those of Sgt. Don Doyle, also present at the shooting. And, Taylor says, neither of their recollections match the expert opinion of forensic consultant Tom Bevel, hired by APD to determine the probable locations of both "deceased and … shooter" at the moment Schroeder fired her 9mm pistol. "Do I believe that [Schroeder] is a cold-blooded killer?" asks Taylor. "Absolutely not. But I do believe that a mother has the right to know what happened to her son."

Rocha was killed by a single round from Schroeder's gun, fired into his back shortly after 11pm during a "traffic stop" made in connection with an undercover drug operation in Southeast Austin's Dove Springs neighborhood. According to the officers' official statements, Rocha fought with Schroeder and Doyle, a struggle that ended with all three on the ground. Schroeder says she shot Rocha because she thought he'd grabbed her Taser from a Velcro pocket on her police vest and was preparing to use it on Doyle.

The night after the shooting, police investigators assembled in the parking lot of Akins High School for the videotaped re-enactment of the shooting. Unfortunately, that replay of events has done nothing to persuade Rocha's family that Daniel's death was caused by anything other than police overreaction and poor judgement. Moreover, Taylor asserts that the differences, however slight, between the officers' written statements and their recorded re-enactments show that police have lied about what happened in the darkened intersection.

A review of the tape makes clear at least one thing: However the shooting unfolded, it happened extremely quickly. On the tape, Doyle seems frustrated and slightly perplexed about the chain of events that ended in Rocha's death. "This is all moving very fast; very fast and [Rocha] is trying to run," Doyle tells police investigators as he tries to reconstruct the previous evening's events. He remembers Schroeder's partner, Officer Michelle Borton, walking toward the driver's door of the SUV that Rocha was riding in, then hearing Borton call out that Schroeder's "'got Rocha and she needs help.'" Doyle saw Schroeder struggling with Rocha, who was trying to run away; Doyle's only focus, he said, was trying to "get a hold of him quick or he was going to get away." Doyle said he was trying to grab Rocha's shirt, his arm, and then – after he was pushed, or had tripped, and had fallen to the ground – he was focused only on trying to hold onto Rocha's leg.

As a result, Doyle said, he wasn't really sure what Schroeder was doing or exactly where she was until he heard a "pop" that he thought at first was the sound of a Taser firing. "I look up and I see … just about the first two inches of a black pistol," he said. "I look up at her and she's got this shocked, 'Oh my God' look on her face, almost like frozen." At this point, he said, Schroeder was standing behind and to the right of Rocha. Doyle's recollection of Schroeder's position, however, is contrary to both Schroeder's recollection and to the path the bullet took through Rocha's back, which went in slightly below his left shoulder and headed down, diagonally to the right front of his body, where it remained lodged. "I just remember a white T-shirt, a shoulder, and a black muzzle," Doyle told investigators. "I wish I had a movie camera in my head, but I can't play it back."

According to Schroeder, as she walked to the rear passenger side door of the SUV, she recognized Rocha – with whom she'd had previous contact – sitting in the back seat. When she first approached, he "plays like he's being real calm," she said during her recorded re-enactment, "for a [minute], then, boom, he wants out of the car." Rocha was struggling with her, trying to run, she said, before Doyle approached in an effort to help. The three of them ended up on the ground and Rocha's hands were "on everything," she says, moving her hands around the sides of her police vest. Somehow – perhaps because Doyle was trying to hold onto Rocha's leg – Rocha ended up bent over Doyle; at this point, Schroeder says, she felt for her Taser and realized it was gone. Schroeder did not pause: "I'm watching like, 'Oh my God,'" she said. She couldn't see Rocha's hands, she said, and imagined that he'd taken her Taser and was, for whatever reason, planning to use it on Doyle; she reached for her gun. Schroeder explained that she was slightly to the left and behind Rocha who lunged – either on his knees or in a half-crouched position – over Doyle, who was face up, on the ground in a half-sitting position. "It was one motion; once my hand landed on my gun it was out and it was a shot," she said. Rocha fell forward and was soon dead.

Despite Taylor's misgivings, the video re-enactments do, in general, comport with the officers' written version of events. Still, they are still less than satisfying and, more than anything else, reveal officers who appear traumatized and are exhibiting less than total recall of the admittedly unexpected events that led to Rocha's death. That's not uncommon to witness statements, which are often contradictory and inaccurate. But it is troubling because of the tragic outcome and also because police officers are trained and expected to have better-than-average recall. And Taylor says that Schroeder's quick draw – moving immediately from imagining that Rocha had taken her Taser into pulling the trigger on her gun – was an unacceptable overreaction. "If you get stopped tomorrow, [an officer] could say they thought you were reaching for a gun," instead of reaching for proof of insurance, for example. Under the Schroeder standard, Taylor says, "whatever you thought [someone was doing], even if it is not reasonable," is justification to shoot, he said. Indeed, among other things, Schroeder's own re-enactment suggests that she didn't stop to think about exactly where she was firing – at such close quarters it appears that the sudden shot that hit Rocha could very well have hit Sgt. Doyle as well.

In addition, Taylor charges that Schroeder wasn't truthful about where she was when she shot Rocha, based on the conclusions of Bevel. According to Bevel's report, the most likely positions for Schroeder "include standing or kneeling to the left front side of the deceased," with Rocha "down on one or both knees or bent over at the waist." Taylor says that if Schroeder were to the "front" of Rocha she should've been able to see his hands and therefore would know that the teen didn't have her Taser. Contacted by the Chronicle, Bevel said that the "key" word in his conclusion is "side" – and that he used "front" to mean that Schroeder was closer to Rocha's head, and not his feet, when she fired the fatal shot.

Ultimately, what the discrepancies mean, if anything, will be up to APD Chief Stan Knee to decide. The Citizens Review Panel of the Office of the Police Monitor made its recommendations late last week, but those will be kept confidential until Knee decides whether, and what sort of, discipline should be imposed. Knee's decision is expected later this month.