Towers in the Pipeline 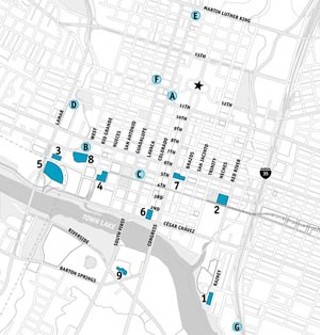 Austin has long held a goal of a sizable Downtown resident base – 25,000 people is the number proposed by Mayor Will Wynn. The current spate of tower projects would provide about a quarter of that housing – and more than quadruple the current stock.
Click for a larger map

The Milago on Rainey Street is currently under construction (as one can see from the Congress Avenue Bridge). Finish-out work also continues at the 5 Fifty Five, inside the Austin Hilton. Both projects are being marketed now.

Spring, Third and Nueces, and Gables Park Plaza all require zoning or entitlement changes that need approval by the City Council; all have now been recommended for that approval by the city Zoning and Platting Commission. Spring is expected to hit the dais Nov. 17, as may the others, given how few council meetings remain this year. The Spring controversy may be played out, though neighborhood groups still have enough vigor to have secured a two-week postponement of the case. Third and Nueces is expected to be noncontentious. Gables is a wild card, given the past histrionics over proposed towers on the Lumbermen's tract.

On the Drawing Board

101 Colorado and 501 Congress are presumably already entitled for the projects their owners have proposed, although it's hard to know for sure until they start pulling permits, which is still in the indefinite future. No details on the status of the Monarch and 210 Barton Springs projects were available at press time.