The African-American Quality of Life plan gets aired out; NAACP unsatisfied 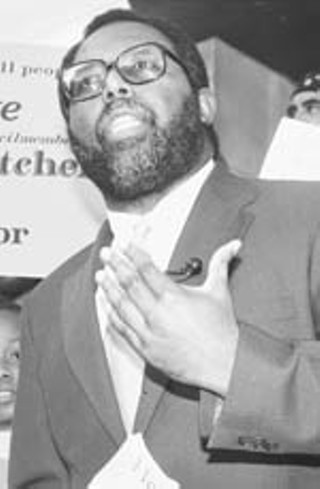 "What we are addressing tonight – we can call it 'quality of life' – is the end result of city-sanctioned and city-sponsored racism," said Austin NAACP President Nelson Linder to an overflow audience Thursday evening, as city and community leaders presented their African-American Quality of Life Implementation Plan in Council chambers. "What we're talking about didn't come from Mars, they were based on practices by public officials right here in the city of Austin for years and years and years that weren't fully addressed."

The Implementation Plan's recommendations were adapted from findings recorded in the city's African-American Quality of Life scorecard, undertaken after the disastrous Midtown Live fire and ensuing controversy (which, in Linder's words, have "fallen off the radar"). The studies have sought to answer two questions – the first being, do African-Americans experience challenges different from others in Austin?

The answer, said Acting Assistant City Manager Michael McDonald, who moderated the presentation, "was an overwhelming yes." Scorecard data pointed to several problems facing Austin's black community; a diminished cultural and social scene for black residents was at the forefront. Coupled with other problems – disproportionately low incomes and college education rates compared to Austin's Anglo population, and one of the lowest home ownership rates in the nation – Austin's relatively small African-American population (under 10%) is dwindling, with blacks leaving for suburbs or cities with large, socially inclusive black communities, like Atlanta.

Answers to the second question – what can local government do to retain and attract African-Americans so that Austin maintains a diverse economy and culture? – were laid out across six categories: health; police and safety; arts, culture, and entertainment; business and economic development; neighborhood sustainability; and employment and education. Among the more noteworthy was the fact that the police and safety team's first recommendation, "to develop and implement an official city of Austin police policy of disablement, and not deadly force," was altered by city staff – the four-word qualifier at the end deleted. Assistant APD Chief Cathy Ellison said the intent was to create "a special emphasis on the use of less lethal force." Linder said, "Our goal for this process was to create a policy of disablement, not deadly force, for African-Americans. It's not really a new policy, because in reality, white folks already have it." Other proposals offered by the team included an emphasis on identifying and disciplining inappropriate officers, re-evaluating APD cultural sensitivity training and psychological screening, promoting more African-Americans into decision-making roles, and rapid review of "early warning systems designed to monitor excessive use of force by police officers."

Also noteworthy were the arts, culture, and entertainment recommendations. One of the first ones – renaming the Carver Museum Theater after African-American theater pioneer Boyd Vance – was implemented earlier that day. A campaign to highlight Austin's black culture and history was also suggested, in tandem with a push from the Austin Convention and Visitor's Bureau. A proposed African-American cultural fund, however, was exchanged by staff for increased funds and participation in the city's Cultural Arts Funding Program. Also, a recommended city staff position to seek arts funding was converted into a minority outreach and participation liaison.

The most ambitious arts, culture, and entertainment proposal – the creation of an African-American Cultural Arts District in historically black areas, like the Huston-Tillotson neighborhood – was rolled into a Community Cultural Arts Plan, to be implemented in June 2006. Scheduled for speedier implementation is a February African-American film festival, an urban music festival in April, and summer film screenings at the Carver.

Community reaction to the plan as a whole was measured, with many speakers calling it the first step in a long journey. Asked if he was happy with the final plan, Linder said, "No, we're not." While some proposals are workable, others aren't, he elaborated. He told council that in order to work, the plan would "require an extensive financial investment."

"I must be honest. I'm not encouraged by what I've heard thus far when it comes to dollars. We can talk about processes, but when it comes to money, there's too many hesitations. And I'm going to tell you tonight again, it's very, very important to address race-specific remedies with dollars and resources that will once and for all show a real commitment to addressing inequality."

Highlights from the 55 recommendations:

• Develop and implement an official police policy of disablement