How Not to Gentrify: HRC Asks for Eastside Moratorium 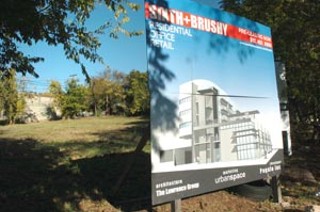 Eastsiders worry that mixed-use projects such as this are gentrifying them out of the neighborhood. (Photo By John Anderson)

What a difference four miles make.

Drive eight-or-so minutes Northeast from Perry Lorenz's proposed Spring condo development at Third and Bowie, and you'll arrive at the (as yet unbuilt) McKinley Place Townhomes, on East 18th between Harvey and Sanchez. Lorenz's condos, starting around $200K (if the city approves the scale proposed by the builders), are being trumpeted as more "affordable" to those aspiring to live in the urban core. McKinley Place, on the other hand – announced at around the same price – advertises itself as luxurious, "the new standard of upscale living in Central East Austin." East of the interstate, your real estate dollar – if you've got one – goes further, but not to the unmixed delight of some longtime Eastside neighborhood groups. Late last month, spurred by a report from the activist organization People Organized in the Defense of Earth and Her Resources (PODER), the Austin Human Rights Commission recommended a 90-day moratorium on new projects in the East Cesar Chavez neighborhood. It's now City Council's call.

In an instance of cruel irony, the zoning changes that are creating multiplying, upscale Eastside development – and that critics say are driving out current residents – were initially implemented, in the words of the city's East Cesar Chavez Neighborhood Plan, because "the residential and historic character of the neighborhood is threatened." Zoning changes have been under way on the Eastside for some time; that particular warning comes from a 1999 report on recommended changes. The threat was seen initially as stemming from the Eastside's proximity to an expanding Downtown, and the solution was "a mix of business and residential land uses in commercial areas."

Formed in 1991 initially to champion Eastside environmentalism, PODER began involving itself in neighborhood planning issues around 2000, when the city's Planning Commission began adopting neighborhood plans for several Eastside areas, said Adam Smith, who helped oversee creation of the East Cesar Chavez Neighborhood Planning Area. East Cesar Chavez's plan was adopted in 1999, the Holly neighborhood's in 2001, along with Central East Austin, and Govalle in 2003. The result, said Smith, was that East Austin, previously "overzoned with commercial and industrial zoning," found several areas changed into mixed-use corridors. "That's just what happened," said Smith. Such changes cleared the way for projects like the Pedernales Lofts on East Sixth, where $155K to $184K residential abodes sit smartly above offices and retailers. An April article in USA Today ("Studies: Gentrification a Boost for Everyone") says the lofts have "raised adjacent land values more than 50% since 2003."

That's good for some, not so good for others. PODER's presentation to the Human Rights Commission during the commission's September meeting detailed how changes in East Austin zoning law were leading to such price spikes, pushing out longtime residents in the process. The result, says PODER, is a disproportionate level of East Austin foreclosures – approximately 70% of the total across the city. Wanting time to examine the claims, the HRC proposed a 90-day moratorium on new projects (those that haven't yet broken ground or been approved). The area covered in the PODER recommendation included the East Cesar Chavez Neighborhood (I-35 to Chicon, and Town Lake to the alley between East Sixth and Seventh). The HRC stretched the proposed moratorium area north, to 12th Street.

With rising housing prices rapidly inflating "a predominantly Hispanic and African-American low-income area," HRC Chair William Hale said developers are building housing that's unaffordable to the Eastside's minority residents. "In doing so, there is the possibility, the possibility, of denying housing opportunities to African-Americans and Hispanics," which would be a violation of the Fair Housing laws. "We're not sure that's going on," said Hale. "That's why we want to have the 90-day moratorium. … If the study shows there is disproportionate impact, there'll have to be some adjustments."

"I'm not sure you can segregate a certain type of housing from other types being developed," said City Council Member Raul Alvarez, acknowledging the slippery slope of halting only a specific type of construction. "How specifically could it be addressed? You want to be sure what direction we're going," he said, pointing to past moratoriums passed by the city, such as development over the Aquifer, or large duplex development. Alvarez doesn't see the same purpose or precision in the HRC's proposal. "What do we hope to gain?" He also characterized "the loft/condo phenomenon" as a recent development. "We have maybe a year's worth of data to go on. … I think there's a need for analysis before jumping in." He suggested identifying recent condo and loft projects and comparing surrounding home prices before and after. "Off the cuff, it seems like one, two years worth of data is available. It's difficult to identify the trend."

"I think it would be feasible," PODER director Susana Almanza said of the moratorium. "There is a height regulation for the Cesar Chavez area. Right now, the neighborhood plan has it at three stories. If they don't want to single out condos and lofts, they can look at height restrictions." Almanza also suggested implementing the condo/loft moratorium by only addressing construction on tracts zoned as such – this might prove problematic, however, as depending on size and usage, condos and lofts can be zoned a variety of ways. As for the need for more analysis, Almanza cited numbers from the UT School of Architecture's Community and Regional Planning Program, which found from 1998 to 2004 land values in the East Cesar Chavez neighborhood had increased more than 400%, and taxes had gone up 123%. Said Almanza, "the study's already been done."