Point Austin: The Prosecutor and the Pariah

Don't know about you, but I'm beginning to feel sorry for Tom DeLay 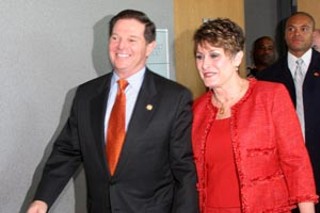 Rep. Tom DeLay (with wife Christine) was in town last week for his initial court appearance on money laundering and conspiracy charges. The Sugar Land Republican seeks to have Judge Bob Perkins removed from the case because of Perkins’ political contributions to Democratic organizations. C.W. Duncan, a retired Democratic judge from Bell Co., will hear that motion on Nov. 1 in Austin. – Amy Smith (Photo By Jana Birchum)

Last year, when he was eagerly bullying his fellow Republicans at the Capitol into slicing and dicing Texas into congressional gazpacho, U.S. House Majority Leader (currently on hiatus) Tom DeLay barely had time to grunt hidy to reporters. But last week, visiting Our Fair City to legally complain about the political bias of its officials and residents, he was all smiles, until his face was nearly ready to break. Perhaps you've seen the mug shot – for his booking photo, hoping to foil political opponents, he featured a rictus that definitely looks postmortem. Yet that moment pales in comparison to the beatific grimace he shined on the press corps Friday for his Capitol press conference, following his court appearance to move for a recusal for bias of state District Judge Bob Perkins.

"He was grinnin' like a possum eating shit," acutely noted one Austin good ol' boy long familiar with DeLay's species. Beaming down upon his captive audience, DeLay began with a polite lie – "Thank you for this opportunity to speak with you all" – and then moved on to more substantive prevarications. "The only reason I had to stand in that courtroom today," he declared, "was because Ronnie Earle has abused his prosecutorial power and pursued these contrived and baseless charges." He described his indictments (on felony charges of conspiracy and money laundering) as entirely a result of Earle's "political vendetta" – simply retribution for DeLay's political victories. "I have been charged for defeating Democrats, advocating constitutional representation, and advancing the Republican agenda." As I recall, when DeLay was actually in the process of re-redistricting Texas, he insisted to anyone who would listen that the Texas Lege was actually driving the process. Now he's eager to take credit for it, if he can blame his current troubles on an overzealous prosecutor who just doesn't like what DeLay did to the Democrats.

While we're all consulting dictionaries to learn how to spell schadenfreude – gleefully malicious satisfaction in another's misfortune – it's worth noting that there's an argument to be made that Earle is not yet being zealous enough. I don't care to kick the prosecutor when DeLay and his lawyers and an army of GOP operatives are doing such a bang-up job of it, but it has taken so long (perhaps understandably) to get to these indictments, that the hijacking of the 2002 election DeLay and his alleged co-conspirators John Colyandro and Jim Ellis made possible, is becoming more and more a distant memory. Beyond the question of timing, there were enough GOP and corporate fingerprints all over the flagrantly illegal bankrolling of the 2002 campaign – I know their lawyers say the law is "vague," but somehow everyone else managed to obey it for nearly a century – that Earle could well be passing out tickets down at the booking room.

Attorney Cris Feldman, whose successful litigation on behalf of defeated candidates against DeLay aide Ellis, et al., has been put on hold pending resolution of the criminal charges, points out that "the effort to funnel corporate funding into the election campaign was massive yet secretive, and it was undertaken by many well-placed and powerful Republican officials in Austin." That's not to say Earle has the (actionable) goods on all of them, but the post-election boasting by GOP hearties (like Bill Hammond's "we blew the doors off!") make it clear that the effort was intentional, conscious, and an integral part of the overall Republican campaign.

One wonders where Hammond, of the Texas Association of Business, who gleefully celebrated the buckets of corporate spending, falls in the grand jury's notebook of infamy. More specifically, asks Craig McDonald of Texans for Public Justice (the campaign watch organization that started the whole ball rolling), "Where's the speaker?" Texas House Speaker Tom Craddick, you will recall, traveled to Houston in October of 2002 to relieve a tort-reform cabal misnamed the Alliance for Quality Nursing Home Care Inc. of $100,000 in corporate cash, duly deposited in the campaign cash box of Texans for a Republican Majority. The Alliance got indicted, TRMPAC got indicted – but Craddick? Craddick still has the run of the House, and according to his attorney Roy Minton, was informed last week by none other than Earle himself that he's off the hook.

"TRMPAC was Craddick's plaything," noted McDonald bluntly. "An executive [of the Nursing Home Alliance] flies down from Boston to hand him a $100,000 corporate check for TRMPAC. On the surface, from the public record alone, it would appear that the speaker was the bagman for an illegal transaction."

Looked at from that end of the telescope, perhaps we should stop feeling sorry for Ellis and Colyandro – the small fish in Earle's tidy little net – and start feeling sorry for DeLay, only one of the two Toms at the center of the Tomstown scandal. It's just my speculation, but it seems likely that Earle was hoping that Ellis and Colyandro would roll over on their boss – whose protestations of innocence are belied by his long "Hammer" history of tightly managed fundraising operations. When they declined to do so, he decided to grab the tail of the tiger directly and move to indict DeLay, before the statute of limitations expired. The same dilemma may have saved Craddick's sanctimonious behind.

So perhaps there is some justice, after all, in DeLay's cries of unjust prosecution. "What about all my buddies?" he could be wondering. "How come they're getting away with it, and I get stuck holding the bag?" Well, Tom, as your good friend Bill Clinton once mused, life is just unfair.

But I wouldn't worry. No matter how the trial comes out, you will always hold an honored place in the lengthy history of Texas political infamy.

The Rise of the Invisible Man
Can longshot Democrat Chris Bell ring up a miracle?