Zeroing in on Our Throwaway Culture 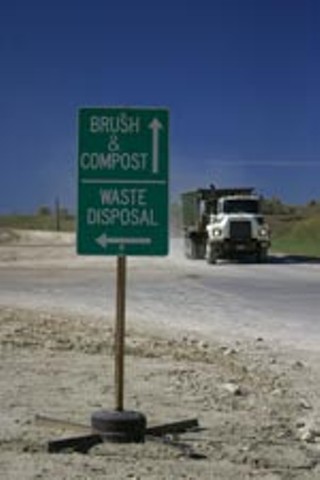 The residents of Northeast Travis Co. living in the shadow of two decades-old, stinking mountains of trash – expected to rival Mount Bonnell's height before they are closed – will be the first to tell you that the time has come for a monumental shift in how our community deals with waste.

Much to these residents' satisfaction, the city's Solid Waste Advisory Committee is going to back them up today, when it presents to City Council the findings of its Long Range Planning Task Force. The presentation outlines the groundwork for shifting how we handle our garbage. Among other things, it includes an ambitious goal of sending 0% of the area's waste to landfills and incinerators by 2040, an idea initiated shortly after Mayor Will Wynn signed the Urban Environmental Accords on World Environmental Day, June 5 in San Francisco.

In July, the SWAC task force integrated the accord's waste reduction principles into its planning, which, in addition to the Zero Waste goal, includes adopting citywide laws that reduce the use of disposable, toxic, or nonrenewable products by 50% and implementing user-friendly recycling and composting programs. It also recommends hiring a third-party consultant to bring the plan to fruition. The goal is to reduce the landfilling and incineration of solid waste by 20% in seven years, as well as to develop profitable, sustainable businesses around material reuse.

"Everything on this program's scope of work is already being done successfully in many other communities nationwide. We're just cherry-picking the best for Austin," said SWAC Chair Gerry Acuna, CEO of Austin's Tri-Recycling. One place the task force looked for inspiration was Alameda County, California, which is pursuing a goal of 75% diversion by 2010. Alameda County's Web site, www.stopwaste.org, states that "each dollar spent on diversion instead of landfill disposal generates nearly twice as many sales tax revenue dollars and jobs." Austin is diverting about 25% of its waste from landfills, but achieving SWAC's minimum goal of 75% diversion, including 100% of organic waste, would be fantastic, Acuna said. In the meantime, the city is moving toward implementing a Single Stream Recycling Program, replacing current 13-gallon recycling bins with 65-gallon containers in which all recyclables can be combined without the need for sorting. The new program is expected to double the landfill diversion rate over seven years and could begin within two years, Acuna said.

Neil Seldman, co-founder of the Institute for Local Self Reliance, advised Austin on landfill alternatives during the summer. He said "Zero Waste or darn close to it," as the program is jokingly dubbed, "places added emphasis on how products are packaged and distributed," requiring cooperation between producers and communities to end the one-directional throwaway culture. Seldman said the business of recycling and waste diversion, such as new firms recycling construction and demolition waste (which accounts for roughly 35% of landfill capacity), can be "very practical and profitable." He also pointed to local waste handler and landfill operator Texas Disposal Systems, which he called a Zero Waste compatible company, describing its site as a "very good example of a modern, efficiently run facility, whose owner is committed to recycling as much as possible." Owner Bob Gregory said TDS, opened in 1991 just south of Austin, is the first landfill in the state to incorporate recycling, composting, and resale. "We developed the site to be environmentally and neighbor friendly," said Gregory. "We did more recycling and composting last year than the city of Austin generated in household garbage." The TDS landfill site also houses an exotic game ranch and a cavernous banquet hall, where Gregory says some 50,000 people attended more than 160 events last year. Special Projects Director Dennis Hobbs said composting has been a good business for TDS, which makes more than 41 different organic soil products that incorporate wood waste items like tree limbs, yard trimmings, and wood pallets with paper, bad produce, off-spec or past-shelf-life soda and beer, road kill, and old milk. Hobbs said plans are under way to expand the TDS site into an "Eco-Industrial Park," housing electronic waste processors and recyclers that could create goods such as planks and pilings from compressed, recycled plastic.

Texas Campaign for the Environment's Robin Schneider said the SWAC process represents a positive way out of a seemingly intractable problem. "This could be the good news people are looking for after battle upon battle over waste issues."