Real-life hero of 'Hotel Rwanda' is honored for saving lives 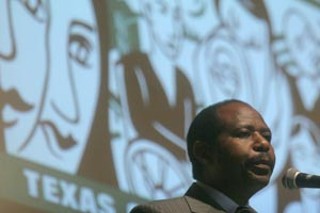 The real-life hero of the movie Hotel Rwanda was honored with the Michael Tigar Center Human Rights Award at a dinner last week by the Texas Civil Rights Project. (Photo By Jana Birchum)

"Never again" may be the most abused words in history. The phrase became the refrain of world leaders after the Holocaust, but for Paul Rusesabagina, the words ring hollow. "Every world leader said those two words. Every world leader abused those two words." And yet, as Rusesabagina explained to a spellbound audience in the Texas Union Ballroom last Sunday night, it did happen again. It is happening again. And the world has largely remained silent.

Rusesabagina was in Austin to accept the Tigar Center Human Rights Award honoring him for his actions: As manager of the Mille Collines hotel in Kigali, Rwanda, during the genocide that occurred during the spring of 1994, he saved the lives of more than 1,200 people. His story – which became the basis of the Oscar-nominated film Hotel Rwanda – is one of an ordinary person whose courage and commitment to right action prevails when evil surrounds him.

Rusesabagina is the son of Rwandan farmers. He attended a missionary school in central Rwanda and went on to attend the Faculty of Theology in Cameroon. He was then employed by Sabena – the Belgian travel giant – in its hotel in Akagera National Park in eastern Rwanda, and in 1984, he was hired as the assistant manager of the Hotel Mille Collines. Nine years later – in a move that would profoundly change his life – he was promoted to general manager of the nearby Diplomat Hotel. These two hotels were the center of foreign and government business in Kigali in the early 1990s and became central properties during the genocide.

Rusesabagina is a round-faced, slightly balding man who speaks with a powerful cadence and a slight French accent. To a capitivated audience, he delivered short lesson on the history of Rwanda, explaining that there are three major tribes – the Hutu majority, the Tutsi minority, and a smattering of Twa/Pigmoid – which had lived in harmony for centuries, intermarrying and sharing culture, language, and land. During the Belgian colonization, the tribes were separated and required to carry identity cards, eventually producing strife and a series of civil wars. By the early 1990s, Rwanda had gained its independence, and was a semifunctioning democracy ruled by the Hutu majority. But a simmering civil war between a group of Tutsis who had been living in exile in Uganda erupted in 1990 and continued over the next four years, despite a 1993 peace accord. During that time, Hutu militia began stockpiling weapons and planning for a mass extermination of Tutsis. On April 6, 1994, the Hutu President Habyarimana of Rwanda and President Ntaryamira of nearby Burundi (also a Hutu) were killed when their plane was shot down at the Kigali airport.

The Hutu militia used the assassinations as the trigger for a systematic genocide of nearly 1 million Tutsi and moderate Hutu. Rusesabagina's voice quieted as he told how he was at home with his family – he is a Hutu, and his wife is a Tutsi – when there was a knock on his door. Twenty militia members waited outside and asked if he was the manager of the Diplomat Hotel. When he said he was, they demanded that he take them to the hotel because it had been taken over as the command center for the interim government.

Rusesabagina made a decision which impacted not only his life, but those of hundreds of others. He said he would go and provide the needed keys for the Hotel, but only if they gave him, his family, and the 26 neighbors who were hiding in his home safe passage to the Hotel Mille Collines. The militia agreed, and everyone crammed into cars and a van and followed the military convoy. About a mile from his home, the convoy stopped. "A captain, the same captain who was so kind, a nice guy," demanded that Rusesabagina kill the Tutsi family and friends with him in the car. He refused. "I do not even know how to use a gun," he pleaded. "But even if I did, I would not kill."

Rusesabagina negotiated for more than two hours. "Are you sure the enemy you are fighting today is this old man?" he asked. "Are you sure the enemy you are fighting today is this baby?" Finally, after he promised a sum of money from the Diplomat Hotel safe, the group was transported to the Mille Collines. There, Rusesabagina again made the decision to protect many lives rather than simply save his own. He stayed at the Mille Collines for the entire 100 days of the genocide, using his negotiating skills, and the large stocks of liquor in the cellar, to maintain the hotel as a bastion of peace in a world gone mad – as people were using machetes to kill their neighbors, as entire communities were killed in churches and then set afire, as the rivers were dammed by bloated bodies. Despite repeated threats from the militia, Rusesabagina held his ground, and no one who stayed at the hotel was killed.

Rusesabagina has said that his actions were not heroic, insisting, "What I did was normal. When did the day arrive when not to kill is considered heroic? All I did was carry out my duties and responsibilities." He continues to work on behalf of the children orphaned by the genocide, and in January he traveled to the Darfur region of Sudan and found that the conditions there are "exactly like they were in Rwanda" before the genocide. It is understandable that the words "never again" remain bitter in his mouth.

In Hotel Rwanda, a journalist describes the ongoing atrocities and predicts that people will watch the reports, say, "Oh, how terrible," and yet "go on eating their dinners." Terry George, the film's director, who introduced Rusesabagina on Sunday, said, "My biggest fear is that people will watch Hotel Rwanda … and go back to just living their lives." Rusesabagina urged those in the room not to simply go back to eating their dinners.

Note: for more information, or to offer assistance, see the Web site of the Hotel Rwanda Rusesabagina Foundation, www.hrrfoundation.org. Paul Rusesabagina is working on a book, An Ordinary Man, scheduled for publication in April 2006 by Viking. 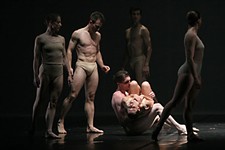