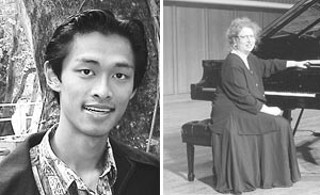 On the evening of the murder, Jackson Ngai (l) believed that UT piano professor Danielle Martin (r) was trying to poison him, trying to make him cut off his fingers, and trying to starve him to death. He believed she was being controlled by a computer chip planted in her brain.

The Texas insanity defense asks of jurors a feat akin to mind-reading. In addition to finding that a defendant was insane at the time of the offense, juries must determine whether a defendant knew his actions were "wrong." It's a tough standard, and rarely met. But last Thursday, Oct. 20, jurors found former UT grad student Jackson Ngai not guilty by reason of insanity of the murder of his music professor, Danielle Martin.

Ngai had a history of psychiatric problems that began shortly after he came to Texas from Hawaii in August 2003. Ngai, a pianist, was supposed to start graduate studies in UT's music department in the fall semester. Soon after his move, he began calling friends and family back home with improbable stories about computer hackers, identity theft, and kidnappers. Ngai's family contacted Martin, a UT piano professor, and asked her to check on him. When Martin went to visit Ngai at his apartment, he had what seems to have been his first psychotic break, believing that Martin was trying to kidnap him. He began breaking windows and was committed to the Austin State Hospital for two weeks. At ASH, doctors diagnosed Ngai with bipolar disorder and gave him medications to control his moods. (It appears this was a misdiagnosis – Ngai has subsequently been diagnosed with schizophrenia – which may have contributed to his troubles. The medications helped to control his moods and behavior but apparently allowed his delusions to continue unchecked.)

After Ngai's release, he and Martin became close friends. Martin had been diagnosed with bipolar disorder herself years ago, and friends say she believed she could help Ngai manage his condition. She also suffered from multiple sclerosis, and needed Ngai's help running errands, doing chores, and sometimes just moving from room to room. When Martin had an acute attack of MS over the 2003-04 winter break, Ngai stayed in Austin to be near her instead of going back to Hawaii. Friends who visited Martin in the hospital say Ngai was with her almost every day.

In the spring, Ngai's mental condition worsened. In January, he had begun weaning himself off his medications, after consulting with Martin and his father. The drugs made him tired all the time, he said, and made his hands tremble too much to practice the piano. Friends and classmates say he seemed increasingly paranoid, telling stories about computer chips that kept track of him and controlled his mind. On April 29, 2004, the evening of the murder, Ngai believed Martin was trying to poison him, trying to make him cut off his fingers, and trying to starve him to death, according to a psychiatrist appointed by the court to evaluate his sanity seven months later. He believed that night that Martin was being controlled by a computer chip planted in her brain. While the pair ate dinner together, Ngai left the table, went into the kitchen, and picked up a meat cleaver from the counter. "I did this two times," psychiatrist Dr. Richard Coons quoted Ngai to the jury, from a November 2004 interview. "The second time I decided I should stab her, and I went for it." Ngai cut and stabbed Martin more than 200 times, mostly around the head, with the cleaver and other sharp objects. A police officer who viewed the body told the jury her head appeared to have been "excavated."

The taped police interview, conducted just hours after the murder, shows a young man in the middle of a full psychotic episode – pacing in tiny circles, shaking violently, and asking officers again and again if they were trying to kill him. Ngai seemed unable to answer most of their questions; to direct accusations that he had committed a murder, he said "computer chip" and "robot." "I'm not a criminal," he told one officer. "I need help."

Ngai's prosecution pointed to details of his testimony to doctors and police officers over the last 18 months – that he says he put the knife down more than once before attacking Martin, that he referred to Martin in the past tense during his police interview – as proof that he knew at the time that his actions were wrong. Dr. Coons testified for the prosecution that Ngai, although seriously mentally ill, knew that society would condemn the murder.

However, Dr. Mary Anderson, a court-appointed psychiatrist who interviewed Ngai two days after the murder to determine his competency to stand trial, told the jury that ideas of right and wrong are muddied during psychotic episodes. "The best analogy is the thought process of a nightmare," she said. "At times you start to wake up and you realize it's a nightmare, and at other times it all becomes very real." Ngai told Anderson he believed Martin wanted him to kill himself that night but that he was afraid he would be assassinated if he left her house. Anderson said a patient as sick as Ngai might need several months in the hospital before being stabilized and even then would need a doctor to be easily accessible, in case something went wrong. Those resources likely weren't available to Ngai, Anderson acknowledged. "Our mental health system is hard to get into."

Ngai is in that system now, though at a terrible cost. Travis Co. Judge Bob Perkins is expected to send Ngai back to Vernon State Hospital, where he was held for three months after the murder until declared competent to stand trial. Doctors at Vernon will evaluate Ngai for 90 days, after which he is likely to be committed to a longer stay in one of the state's mental hospitals. He will be periodically re-evaluated, until it's determined that he's no longer a danger to himself or others. "Someone is dead, so he's probably going to be considered a danger for some time," says Ngai's lawyer, Jim Erickson. On the other hand, evaluating doctors will also consider Ngai's behavior before and since the murder, which, Erickson says, has been exemplary. "He's a good boy," Erickson says. "This is someone who's been held up as an example to others his whole life."

Erickson is uncertain whether the state will let Ngai return to Hawaii, where his family and friends are, after his eventual release. The terms of his probation may require him to remain in Texas for some time. Maybe by then, the state will have a mental health care system capable of taking care of him – a system with the resources to stabilize patients and keep them stable, where they don't have to wait months to see a doctor, where they are not refused hospitalization for being insufficiently dangerous.

More likely, the system will be what it is now – underfunded and chaotic, where a patient's surest shot at treatment is to commit a serious crime. If the system has not changed, there are grim precedents for Ngai's future. In April 2004, a Beaumont jury found Kenneth Pierott guilty of the murder of his girlfriend's 6-year-old son and sentenced him to 60 years in prison. A previous jury had found Pierott not guilty by reason of insanity in 1998 for beating his sister to death and committed him to a mental hospital. Pierott was released from the state hospital after just a few months; at his second trial, his family testified they were unable to find help for him when the symptoms of his illness reappeared.

Ngai isn't talking yet about the future or what his plans might be if and when he is released, Erickson says, but he has said that he's happy he'll be going back to Vernon State Hospital. "There a piano there for him to play," Erickson says. "It's not the best piano – it's pretty old and beat-up – but he can play it."