Abortion, assisted suicide, and free speech vs. campaign reform on the docket 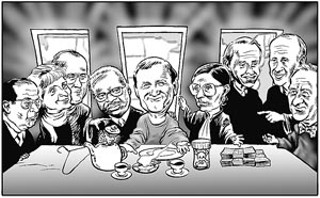 The U.S. Supreme Court's new term began Oct. 3 with 50-year-old John Roberts assuming the center chair, where he will preside as the court's chief justice (and where he may eventually be joined by White House counsel Harriet Miers, President George W. Bush's pick to replace retiring Justice Sandra Day O'Connor). And for Roberts' debut term as the court's most junior member and its top administrator, the court is poised to decide an action-packed docket that will likely chart a course for the future of supreme jurisprudence on a wide variety of hot-button issues, including abortion, campaign finance, gay rights, and religious freedom.

To kick things off, on Oct. 5 the Supremes considered the constitutionality of an Oregon law permitting physician-assisted suicide for mentally competent, terminally ill patients. In Gonzales, et al. v. Oregon, et al., the feds argue that Oregon law runs afoul of the Controlled Substances Act, which says that regulated drugs can only be prescribed for a "legitimate medical purpose." In 2001, former Attorney General John Ashcroft opined that suicide was not such a purpose and penned the so-called "Ashcroft Directive," warning that physicians prescribing drugs for assisted suicide face revocation of their right to prescribe narcotics and/or federal criminal prosecution. Oregon officials cried foul, arguing in part that the feds have no right to interfere with the state's right to license and regulate doctors.

In November, the Supremes will consider the constitutionality of a New Hampshire law requiring minor females to obtain parental consent before undergoing an abortion. The courts have thus far sided with Planned Parenthood of Northern New England's argument that the law lacks an adequate exemption to protect the health and life of the mother. (Additionally, late last month Attorney General Alberto Gonzales asked the court to review a federal court ruling that struck down a federal ban on late-term, or "partial-birth," abortions. Courts in Nebraska, New York, and California have ruled the law unconstitutional because it lacks an adequate life/health exemption. If the court accepts the appeal it likely will not be heard until the spring.)

Also in November, the justices will wrangle with federal narco laws again when they'll be asked to decide whether religious freedoms guaranteed under the First Amendment and the Religious Freedom Restoration Act of 1993 require the government to permit a church to import, distribute, and possess a hallucinogenic drug otherwise outlawed by the Controlled Substances Act. In the case – Gonzales, et al. v. O Centro Espirita Beneficiente Uniao Do Vegetal, et al. or the UDV (Union of the Vegetable) – the feds say that the CSA prohibits the American branch of the Brazilian church from importing ayahuasca, a hallucinogenic plant found in the Amazon River Basin that, when brewed as tea, is an integral part of UDV ceremony. In 1999, U.S. Customs agents seized 30 gallons of the tea from the Santa Fe home of Jeffrey Bronfman, the UDV's U.S. leader (and heir to the Seagram's whiskey fortune), claiming the tea was contraband because it contains the regulated narcotic dimethyltryptamine, or DMT. Bronfman sued, claiming the government was violating the UDV's religious freedoms, under the First Amendment and the 1993 Act that protects the Native American Church's use of peyote. So far the appeals courts have agreed.

In December, the court will take up [Defense Secretary Donald] Rumsfeld v. Forum for Academic and Institutional Rights, et al., in which Rumsfeld argues that the nation's law schools must allow military recruiters the same access to students afforded to other employers or face losing federal funding for the university as a whole. At the heart of the case is the U.S. military's "Don't Ask, Don't Tell" policy toward gays serving in the military. To the Association of American Law Schools – of which nearly every law school is a member – the policy is blatantly discriminatory and as such violates the organization's anti-discrimination policy, forbidding its member schools from allowing employers who discriminate on the basis of race, gender, or sexual orientation to recruit students. Under the policy, employers must sign a statement committing to equal rights before they're allowed to recruit – and the U.S. military could not sign that. Anger over the law school group's stance led to the 1994 passage of the Solomon Act (named for U.S. Rep. Gerald Solomon, R-NY), which withholds federal funding from any university with a law school denying military recruiters access to students. After the law passed, the member law schools reached a compromise with the feds, agreeing to allow access to students but not to school career-service offices. But that hasn't satisfied Bush administration officials who, in the wake of 9/11, wrote to university administrators saying funding would be yanked in its entirety unless the law schools could be brought in line. FAIR, an independent association of 30 law schools, responded to the threat with a 2003 lawsuit, arguing that the bullying tactics amount to a violation of free speech. "If the First Amendment protects the right of bigots to discriminate against gays, then certainly it protects the right of academic institutions to decline to associate with bigots," says FAIR attorney Joshua Rosenkranz.

Finally, in late September the court announced that it will add to its spring docket two cases challenging state and federal campaign reform measures. In Wisconsin Right to Life, Inc. v. Federal Election Commission, the court will decide whether the 2002 bipartisan Campaign Reform Act (aka McCain-Feingold) definition of "electioneering communications" is too broad. The law bans electioneering ads paid for with corporate money from running within a 30- to 60-day period before an election. In the month before the 2004 general election, Wisconsin RTL ran a series of ads urging voters to lobby lawmakers, including Feingold, who was up for re-election, to support Bush's judicial nominees. The FEC cried foul, claiming the ads violated McCain-Feingold. Wisconsin RTL argues that the law's restrictions are absurd and should contain a "grassroots lobbying" exemption; the FEC argues that carving out such exceptions would create a "soup of vagueness" that would gut the law. In the second case, a consolidated action, the Vermont Republican State Committee and the ACLU each are challenging a state law that strictly limits campaign contributions – donors are allowed a maximum $400 contribution to candidates for statewide office during a two-year election cycle (the law also places restrictions on campaign spending, including a $300,000 two-year cap for gubernatorial candidates). The Vermont GOP argues that the caps violate free speech; the state argues that the limits are an acceptable restriction aimed at combating public cynicism about the role of money in politics and at limiting the amount of time a candidate devotes to fundraising activities.