Where Can We Marry? The U.S. Legal Landscape

Gays and lesbians enjoy full legal marriage in only one state

When it comes to marriage laws, the U.S. is all over the map – although if current voting trends promoting the Christian right's "moral values" agenda continue, perhaps not for long.

• Massachusetts allows in-state gay and lesbian couples to marry. In September – one year and 6,000 same-sex marriages after enactment – the Legislature soundly rejected a proposed constitutional ban on same-sex marriages.

• In California, the Legislature passed a measure in September permitting same-sex marriages; last week, Gov. Arnold Schwarzenegger made good on his promise to veto it. The bill would have reversed an existing ban, which is under a legal challenge pending in a state appeals court.

• All but a handful of states (New York, New Mexico, New Jersey, Maryland, and the District of Columbia) have adopted statutes banning the recognition of same-sex marriage.

• In Nebraska, a federal judge struck down the ban on same-sex marriages in May, on grounds that it denies gay and lesbian couples fundamental constitutional rights. The state is appealing. 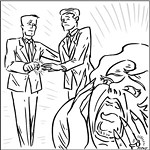 Letters at 3AM
Questions of marriage