Get on the Bus D.C. Report

If 100,000 march on the White House and nobody reports it, did it really happen? 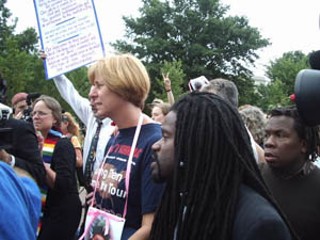 Cindy Sheehan marches in Washington, D.C. – with about 100,000 or more of her closest personal friends – in her crusade to stop the Iraq war. On Monday, Sheehan was arrested for refusing to leave her spot in front of the White House.
(Photo courtesy of David Swanson/afterdowningstreet.org)

While President George W. Bush flew through sunny skies from Colorado to Texas "monitoring" local responses to Hurricane Rita, hundreds of thousands of people gathered at our nation's capitol to call for an end to the occupation of Iraq. Bearing signs ranging from the usual, "Bush Lied, Thousands Died" to the original, "Bush is a giggling murderer. Heh … heh … heh," they followed Cindy Sheehan, the Rev. Jesse Jackson, Jim Hightower, Al Sharpton, and others, as well as military families and veterans, down Pennsylvania Avenue and right up to the White House gate.

"This is amazing," Sheehan said giddily to the roaring crowd, "You guys are making history." Sheehan, whom many credit with reigniting the anti-war movement, had spent the previous couple of days knocking on legislators' doors, hoping for face-to-face discussions about the war. Though she managed to get meetings with senators Hillary Clinton and Harry Reid, two high-profile Dems who gave Bush the a-OK to invade Iraq way back in 2002, neither was willing to call for a troop withdrawal. (Clinton also made it known that she met with Bush's favorite go-to gals, the American Gold Star Mothers – not be confused with Gold Star Families for Peace, of which Sheehan is a founding member.)

Saturday, however, Sheehan was in good company, sharing the mic with Rep. Cynthia McKinney, D-Ga., Rep. Lynne Woolsey, D-Calif., Former Attorney General Ramsey Clark, and others unafraid of opposing the administration's policies. Anne Roesler of Military Families Speak Out was also present to share a message from the battlefield. "My son says that every single time he goes back, the chaos is worse," said Roesler, whose son is a staff sergeant in the 82nd Airborne Division in Iraq. "He fired more rounds and killed more Iraqis in the second deployment than he did in the entire first year that he was there during the invasion, and he doesn't want the job. He'd love to be able to give his two-week notice."

While it's impossible to get a factual number for those in attendance – quotes range from thousands to 500,000 – most reports have the number at 300,000, and the D.C. police put the official number at 100,000, allowing room for more. Such numbers should have drawn at least some media attention, but in the days following the march, there was but one lone AP story that was picked up once or twice by the corporate media, and quickly lost in "Rita's aftermath." To be sure, the rally got ink on lesser-known progressive news sources (see DemocracyNow.org and TruthOut.org), but those who are tuned in to such outlets certainly aren't the only ones who need to know that these people traveled hundreds of miles to stand together in the name of peace, or that there were similar, smaller gatherings reported in San Francisco, London, Copenhagen, Damascus, Helsinki, Paris, Rome, and Seoul. They aren't the only ones who have the right to know that there are soldiers speaking out, community leaders speaking out, and elected officials speaking out, or that these people were speaking out against this war long before any hurricanes found us needing our National Guard here at home. And they are certainly not the only ones who need to be reminded that the Bush administration continues, to this day, to use 9/11 and the "War on Terror" as reasons for the U.S. invasion and occupation of Iraq, even though it has been proven, time and again, that Saddam Hussein had absolutely nothing to do with the events on that day.

This was more than an anti-war protest. Above all, this was a massive gathering of Americans standing together, calling the president of the United States a criminal, a liar, or at best, a fool. On Monday, when Cindy Sheehan and others were arrested for refusing to move along from their seated positions on the ground in front of the White House, the crowd of 500 or so began to chant: "The whole world is watching." If only this whole country was, too.