Why Has Austin's Solar Program Stalled?

Activists think the city has put sun power in the shade 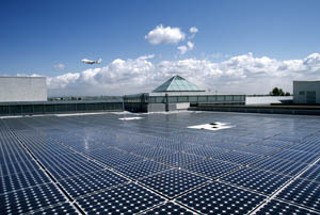 Clean energy advocates, who contend solar energy is the most globally capable of the renewable energy options, see AE's failure to pony up more cash for solar as a missed opportunity to keep pace with places like Germany and Japan, who are subsidizing the massive installation of nearly all the world's available solar panels as they pursue Kyoto Protocol emissions compliance and energy independence. Around ambitious installation efforts grow healthy solar industries, which would not only be consistent with Austin's "clean energy capital of the world" mantra, but also with Austin's existing high tech biz and talent pool.

Most of all, critics assail the slow progress toward the city's ambitious 15 megawatts by 2007 goal for solar installations, set forth in AE's 2003 10-year strategic plan. At the halfway point next month, the goal will be just 3% complete with roughly half a megawatt online. The strategic plan also calls for funding residential and commercial rebate programs for at least 10 years; a public awareness program, including solar installations at schools, libraries, and community centers; and a zero-energy solar subdivision, now back on the drawing board after a failed attempt in the Montopolis neighborhood this year.

Austin Energy maintains it has better and cheaper ways to be green. Asked why solar wasn't shown more budgetary respect and how the utility expects to meet its installation goal, Roger Duncan, AE's deputy general manager, said everything comes down to an ongoing value-of-solar study, designed to calculate what photovoltaic generation units are worth to the city – based on a number of criteria such as fuel savings, emissions reduction, and economic development benefits – compared to other options. To meet the 2007 installation goal, Duncan explained, would cost AE $56 million at a generously low estimated cost of $4 per watt, "a substantial amount" the utility can't afford. "We want to make sure we're paying what the value of solar is," Duncan said. "If the market is not able to produce solar at this value of solar, we need to consider if we want to meet the goal."

Critics believe the study presents a convenient way for the utility to circumvent the goal promised in its strategic plan, and with the study's completion expected no earlier than next year, solar advocates feel AE may be unable to meet the first goal even if they want to. Solar Austin's Mike Sloan, founder of local renewable energy consulting firm Virtus Energy, calls the study a double standard, asking "have they ever done a value of gas or coal study?" He pointed to the myriad of ancillary costs associated with conventional energy production, citing the higher-than-planned first-year operating expenses at AE's Sandhill natural gas plant, the scheduled $100 million in pollution control upgrades being made to AE's Fayette coal facility in La Grange, and recent spikes in natural gas costs – evidenced recently by AE's fuel charge rate hike.

An annual presentation to Austin's environmental community describing AE's overall efficiency and renewables budget, made recently by Duncan, shed some light on why Austin's progressive utility may appear a bit solar-shy. It began with a slide that read "Climate Change" in bold letters. "Climate change is certainly the environmental crisis facing Austin and the planet today," Duncan said. He then explained how AE's limited resources were being directed toward bang-for-the-buck options to cut global warming emissions. After reciting specifics of the $952 million budget, Duncan concluded with a table showing the dollar cost per ton of carbon dioxide reduction created by wind, biomass, or solar power, or existing energy efficiency methods. Energy efficiency topped the list at $22.52 per offset megawatt hour; solar came in last at $119.05.

During the presentation, Duncan announced AE would add a second solar inspector to alleviate the program's current backlog of individuals and businesses wanting to participate in the installation rebate program. A week later, AE announced it would budget an additional $1 million supplement for the residential rebate program from the outset, rather than the original plan of adding it in as needed, like last year. Still, the overall solar budget doesn't exceed the 2004-2005 amount and is strategically no more aggressive.

Not satisfied, Solar Austin demands a more solvent and sustainable solar program. The group says it's no longer acceptable for 95% of Austin's electricity to come from "dirty sources of power" – such as coal, gas, and nukes – and argues in a position paper that "dependency on fossil fuels leads to more greenhouse gasses, soot, and smog-forming toxins in our air and lungs," while "the South Texas Nuclear Project has produced over 1,000 tons of dangerous nuclear waste since 1989." In Solar's defense, Sloan noted that among the other CO2 offsetting options, solar is the only renewable energy type that's intrinsically well suited to be a local resource, not simply because we can make our own energy by installing panels everywhere from parks to parking garages, but because Austin already has a home-grown Silicon and high tech industry to support solar manufacturing. Once solar is installed on roofs, Sloan says, it's a safer, more reliable energy source that is no longer susceptible to the transportation-related uncertainties of fossil fuels – evidenced lately by hurricane-inspired spikes in oil and gas prices. More solar energy could be introduced into Austin's utility mix by building freestanding solar plants in the West Texas desert, by following through with the large, city-owned public awareness installations, laid out in the strategic plan, or by developing a more aggressive installation rebate program forthe public.

Solar Austin's Dave Foster, state program director for Clean Water Action, said, "It seems as if Austin Energy is hesitant to fund more residential and commercial solar installations because they know they can't create as much revenue." It's clear that the utility is concerned about its cash flow, and when you share your power plants, as in residential and commercial installations, you share your cash flow. But funding more local solar installations, said Foster, is "a way to put wealth back into the community." More info at www.solaraustin.org and www.austinenergy.com.