The NCLB Game: If You Don't Make 'Average Yearly Progress' 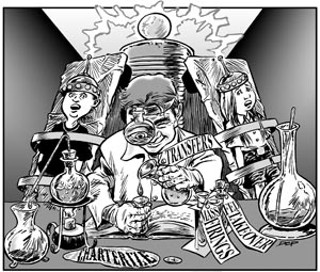 Under the 4-year-old federal No Child Left Behind act, a school that does not make "adequate yearly progress" (AYP) in the same area – reading or math test scores, graduation rate, and/or attendance – for two consecutive years goes into a process called school improvement.

Every year that schools don't meet AYP targets, they move to the next, more dramatic stage. It also becomes harder to meet AYP targets each year; the targets increase about 5% a year, with the goal of 100% of students performing on grade level by 2014.

Five schools in Austin – Reagan, William B. Travis, Lanier, and Johnston high schools, and Porter Middle – are in Stage Two; Dobie Middle is in Stage One. The first Austin schools could reach Stage Five by 2008.

Everything in Stage One, plus:

• Offer Supplemental Educational Services – i.e., tutoring offered by nondistrict vendors – to low-income students (but not to higher-income students at the same school)

Everything in the previous stages, plus at least one of the following:

• Replace staff who are relevant to the failure to make AYP

• Appoint an outside expert to beef up the campus improvement plan

• Extend the school day or year

Everything in the previous stages, plus making plans for an "alternative governance" arrangement, which could be:

• Reopening as a charter school

• Replacing school staff relevant to the failure to make AYP

• Entering into contract with an entity, such as a private management company

• Turning over operation of the school to the TEA

Everything in the previous stages, plus