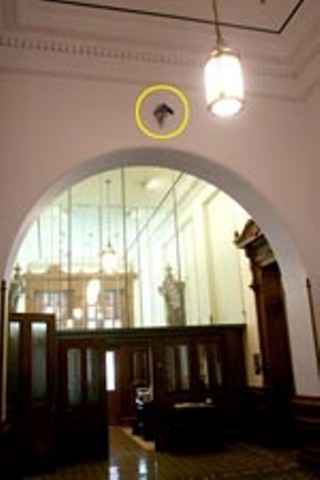 One of the DPS's "hidden" Capitol cameras (Photo By Jana Birchum)

The Texas Department of Public Safety is suing Attorney General Greg Abbott's office, arguing that a recent AG open records decision approving The Texas Observer's request for Capitol security camera videotapes will jeopardize building security. Observer Executive Editor Jake Bernstein filed the request with DPS, seeking video footage captured by cameras in the hallway behind the Texas House chamber on May 23, to investigate rumors that state reps likely to vote against a controversial school voucher bill were cajoled into the rear hallway for a little meet-and-persuade with pro-voucher, conservative GOP backer James Leininger.

In response, DPS extended Homeland Security Act and so-called "law enforcement" exemptions to the state's Public Information Act in order to withhold the tapes. Releasing the tapes, DPS argued, would give away confidential security info – like the placement of and angles captured by the cameras, which would supposedly be a boon for evildoers and a bust for the rest of us.

The AG didn't buy it, however, claiming that the DPS failed to adequately explain how withholding the video would prevent "an act of terrorism or criminal activity related to terrorism," or how and why the tapes would interfere with DPS law enforcement activities. Undeterred, the DPS has hired law firm Akin Gump to reinvigorate its security-concern argument in a lawsuit filed to block release of the tapes, which is pending in Travis Co. District Court. (To read the AG's ruling, go to www.oag.state.tx.us/opinions/orl50abbott/orl2005/or0507765.htm.)