It's been five months since Advanced Micro Devices announced its intention to slaughter, skin, and barbecue one of Austin's most sacred cows – the "major employers shalt not locate in the Barton Springs watershed" commandment – by moving about 2,000 employees into a new facility at the Lantana tract on Southwest Parkway. All the while, AMD spokespeople have insisted their commitment to their plan is unshakeable, and it's beginning to look like they weren't bluffing. Beau Armstrong, CEO of Stratus Properties, which owns the tract in question, confirmed that AMD's commitment involves way more than a friendly handshake. "They're contractually obligated to move forward," he said. "For them to abandon it now would be unbelievably expensive."

Save Our Springs Alliance and its allies in the neighborhood-association and environmental communities, however, insist it's never too late to abort a faulty mission. The group says it has found a chink in what has so far been AMD's most sparkling defense of its move – that the move will make the air cleaner, the roads less congested, and employees' schedules less harried. By moving to Lantana, "AMD will eliminate 10,000 vehicle miles per day from Austin-area roads. This represents a reduction in vehicle miles traveled per day by 16% compared to the existing site," reads a typical statement on the AMD Web site.

The company offered two traffic studies to back up this claim. The first, prepared by real estate firm Staubach & Associates, compared actual employees' commutes to Lantana and to the "existing" site, and found that the total mileage to Lantana was about 10,000 miles shorter. In all the public debate surrounding AMD's plans, and the many hashings and rehashings of the 10,000-mile sound bite, however, one tiny detail fell through the cracks: The "existing" site doesn't actually exist. AMD didn't compare the commute to Lantana with the commute to the current facility at 5204 E. Ben White; rather, the comparison is to a proxy site, the intersection of highways 183 and 71, which is more than two miles east of the current facility. Because this intersection is on Austin's easternmost fringe, the switcheroo has the effect – intended or not – of making most employees' commutes to the nonexistent "existing" site seem longer than they actually are, and making Lantana look better by comparison. The fact that AMD didn't make its use of a proxy location clear until recently smells like book-cooking to Bill Bunch of SOS Alliance. "Why did it take them five months to tell us they used the wrong intersection?" Bunch asked. "Why did they use the wrong intersection at all?"

AMD's Kevin Lyman says there's a logical explanation: AMD never had any intention to stay at its current site, so it didn't make much sense to use it for comparing commutes. "We were looking at creating a consolidated campus," Lyman said, one that would bring together employees from about a dozen outposts around town. "Our current site, the one we're at right now, can't accommodate all our employees." The option nearest the current site that AMD seriously considered is the Lockheed site, nearly three miles east.

Lyman added that a study by WHM Transportation Engineering, which AMD posted on its Web site in August, provides an independent, third-party analysis of the 10,000-mile figure. WHM, however, used Staubach's data for much of its calculations, including the assumptions surrounding the nonexistent "existing" site. In other calculations, the WHM study compared Lantana to two possible sites in addition to the 183/71 intersection: the Mueller redevelopment and the Davenport/San Clemente site near the intersection of 360 and Westlake Drive. For this alternate site analysis, however, WHM did not compare employees' total commutes – instead, the company's analysis compared only the miles driven on "critical" roadways, which it defined to include I-35, MoPac, 183, 360, 71, and 290. The study shows that AMD employees would drive the least number of miles on these "critical" roads if the company moves to Lantana. Mike McInturff of WHM said that the "critical roadway" methodology beats a door-to-door analysis because it's impossible to know the precise route each employee takes to work, and because the traffic that most matters is on Austin's congested highways. It also means, however, that nothing in the study speaks to whether Mueller or Davenport/San Clemente would offer total commute times that are shorter or longer than Lantana.

In the end, Austinites will have to decide for themselves whether the methodology behind the 10,000-mile mantra points to intent to deceive, or whether SOS and allies are simply grasping at straws to make their case. It also bears repeating that the question of employee commutes is only one piece of the AMD debate; the Oak Hill Association of Neighborhoods, which represents the Austinites living closest to Lantana, strongly welcomes the move as a way to revitalize and reinvent Oak Hill, while the SOS side sees the project as encouraging growth in an "undesired growth" corridor. Just as AMD shows no signs of diverting from its path toward groundbreaking in early 2006, the company's opponents show no signs of giving up their protests.

Bottom line: Next time you leap into the frigid waters of Barton Springs, like it or not, you now have something to think about besides "Aaaaaaaaaah." 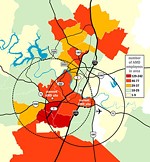