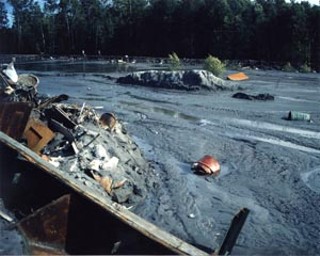 The Grasberg mine tailings have apparently destroyed the rivers below the mine. These photos, taken in and around the Grasberg mine in the mid-1990s, appear to show a lack of environmental concern on the part of Freeport. In an infomercial that the company paid for in the mid-1990s, a Freeport spokesman claimed that "what we're doing is exactly what Mother Nature is doing in Indonesia."

What are the ongoing environmental conditions at the Grasberg mine? Are the mining tailings releasing heavy metals? If so, how bad is the problem?

These questions cannot be answered with certainty, because there are no published reports of any independent monitoring of Freeport's mine and its environmental effects. But there is an historical record that sheds some light on the likely current conditions. In 1999, The Austin Chronicle won a Freedom of Information Act lawsuit against the Overseas Private Investment Corporation, thus forcing the agency to release a report it commissioned on Freeport's Grasberg mine back in 1994.

The Chronicle forced OPIC to release the 1995 report – produced by a Salt Lake City-based company called EnviroSearch International – that convinced OPIC to cancel the $100 million political risk insurance policy it held on Freeport-McMoRan's Grasberg mine.

EnviroSearch was the last known independent auditor ever to be allowed onto the Grasberg site. 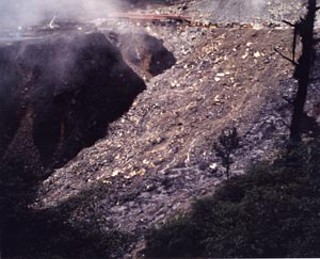 Given the renewed interest in gold mining and the environment in Indonesia, and in Freeport's Grasberg mine in particular, EnviroSearch's findings – even though more than a decade old – have become increasingly important. Their report, submitted to OPIC on Sept. 9, 1994, says that Freeport misled the agency about several aspects of its mining operation and that the company's scientific work was, in several cases, insufficient. Among the key findings:

• By the time of the EnviroSearch/OPIC visit to Grasberg in July of 1994, the mine had doubled its production – to more than 100,000 tons per day – even though Freeport's application with OPIC said the project would have capacity of just 52,000 tons per day. "At no time prior to our monitoring," reads the report, "did Freeport inform us that production levels had expanded significantly beyond the 52,000 ton-per-day level."

• Freeport did not even try to quantify the potential for acid rock drainage at the site. EnviroSearch said Freeport did not test "the raw ore, waste rock material or tailings" for indication of reactive sulfides (an indicator for acid-forming rock). EnviroSearch said the "most significant deficencies in the [Freeport] ARD reports was a lack of mineralogical analyses." By not analyzing the ore for sulfides, Freeport avoided a serious look of Grasberg's ARD potential. EnviroSearch said, "There were several references to sulfide minerals throughout the reports, but no data was supplied."

• Based on what they saw in 1994, EnviroSearch predicted that the tailings from the mine would eventually reach the Arafura Sea. Indeed, satellite photos appear to show that that is exactly what is happening today. EnviroSearch says, "Left unchecked, the tailings are anticipated to continue sheeting in an uncontrolled fashion, eventually reaching the Arafura Sea via an undetermined and apparently unpredictable course and at an undetermined discharge point."

• EnviroSearch says Grasberg already exhibits signs of acid rock drainage: "the site inspection revealed what appeared to be obvious signs of ARD already occurring on the southeast flank of the Grasberg mine."

• The tailings from Freeport's mine are resulting in a "mass loading of contaminants into the Irian [West Papua] environment" and these contaminants have "an as-yet undetermined ability, or inability, for the natural system to overcome such an impact."

• EnviroSearch said Freeport "has devastated the river system." In an appendix to the report, EnviroSearch wrote, "Freeport represented to us that the impact of the tailings on the river system would be 'difficult to separate from process that occur naturally.' Freeport's own data, obtained through our monitoring, site visit and other independent sources of information strongly contradicts this representation. In fact, the project has devastated the river system, through excessive discharge and deposition of tailings."