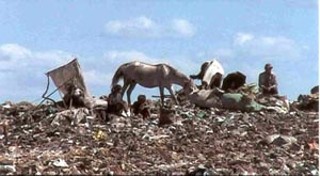 Near impossible to marshal into discrete categories, the corpus of the Cinematexas film festival seeks to inform and agitate; however, the Parallax View arm of Cinematexas shares with its mother festival a distrust of conventional filmmaking forms and procedures as it seeks to deconstruct "the political economy of images." Named after a Vietnam-weary, Watergate-informed thriller-politic from 1974, Parallax View mines a similar mood, sharing similar subjects: mainly, dispatches from America's imperialist folly in Vietnam, echoing chillingly our current situation in Iraq, along with documents of revolutionary Latin American action.

Argentinean provocateur Fernando Solanas' mammoth 1968 debut, the three-hour La Hora de los Hornos (The Hour of the Furnaces), opens the Parallax cell. Screening in three parts (with the latter two-thirds playing tonight), La Hora is a blistering indictment of American and elite Argentine financial interests ravaging the country. Solanas, an Argentine expat during the country's military rule, survivor of a botched assassination attempt, and former centrist member of Parliament, will be on hand to discuss and screen his latest documentary, Memoria del Saqueo (A Social Genocide), which examines the continued socioeconomic decimation of his homeland, this time at the "neoliberal" hands of globalization.

The current of Latin insurrection courses through three other events. Psychogeography: The Battle for Public Space II runs throughout the weekend at the American YouthWorks center, with Argentine and Austinite culture jammers unleashing photography, graffiti, installation, poster art, and other forms of visual resistance. The United Colors of Land Grab film grouping looks at the effects of flat-Earth economics on Latin America.

Marici Weu!! (Ten Times We Will Win!!) depicts the stomach-churning irony of how Benetton, which conspicuously pimps social justice as its defining raison d'être, evicts an indigenous Mapuche family from Patagonia in southern Argentina when they won't kowtow to their corporate interests.

The feature-length Venezuela Bolivariana documents the amazing insurrection in Venezuela that elected Hugo Chavez after he led an aborted coup. After drafting a new constitution and deprivatizing the country's vast resources, Chavez is abducted following a media-and-military-manufactured riot years later. Amazingly, he returns to power once more after popular revolt, still targeted by the U.S. (and for assassination by radical cleric Pat Robertson) for thumbing his nose at American oil interests. This is a fascinating and fiery tirade in the populist tradition.

More Latin American shorts are grouped together in the Somos Nosotros screening Saturday. Parallax concludes Sunday with Gunpoint Democracy and Echoes of Dissidence, featuring the seldom-seen doc Winter Soldier. Produced in 1972 by Vietnam Veterans Against the War, the film is a bare-bones document where soldiers (including a freshly discharged John Kerry) recount the wartime crimes and atrocities they witnessed and participated in, a ghastly mirror to our current Iraq debacle.

Following the film is the panel discussion, G.I. Resistance, the Antiwar Movement, and the Future of Both. This examination of the war against Iraq, its waning public support, and anti-war sentiment in the military features Rahul Mahajan, author and freelance reporter; David Martinez, a documentary filmmaker; and Carl Webb, a National Guard member illegally defying stop-loss orders to report for duty. While there's no word whether Webb's appearance will culminate in police action, his refusal to go to Iraq on moral grounds is also grounds for arrest. Gunpoint Democracy also includes an irreverent and hilarious political montage courtesy of the Lost Film Festival, and a trailer for Sling Shot Hip Hop, a document of how rap's urgency and directness has been adopted by politically conscious Palestinian b-boys. For more, see www.cinematexas.org and the Screens section.

• The screening of Fernando Solanas' La Hora de los Hornos continues at 6pm Thursday, Sept. 15, at the Hideout. Solanas hosts a symposium Saturday, Sept. 17, 4:30pm at American YouthWorks, followed by a screening of Memoria del Saqueo at the Regal Metropolitan at 7pm.