Accusations fly from union of illegal interference in negotiations 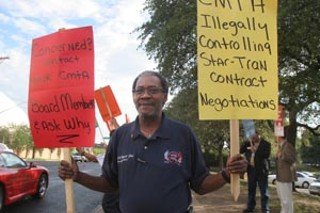 Jay Wyatt, president of the Amalgamated Transit Union Local 1091, protests outside a meeting of the Capital Area Metropolitan Planning Organization on Monday. (Photo By Jana Birchum)

By the time you read this, Amalgamated Transit Union Local 1091 and Capital Metro's largest contractor, StarTran, will in all probability have ended their latest round of negotiations, which took place on Wednesday, Sept. 14. ATU's President Jay Wyatt didn't go into the fight on an optimistic note, saying the demands of the drivers and mechanics of 1091 have not been paid the scantest attention. "We are far apart on everything left on the table. We are far apart on two-tier [pay], on retroactive pay, on health insurance for retirees, and on current health care insurance," Wyatt said. "They [Capital Metro] say, 'Oh, we're close.' That's a lie."

Having been without a contract since Aug. 19, the 850 members of Local 1091 voted to allow the possibility of a strike back in July. In the negotiations since, little has changed in the impasse between workers and StarTran, and even less has gone the union's way: They begrudgingly accepted StarTran's changes to drug-testing policy, a small victory ceded to the contractor in hopes it would help with negotiations. (It apparently hasn't.) StarTran and Cap Metro, who Wyatt alleges are running the bargaining, haven't budged an inch on the union's main complaint, the adoption of a two-tier salary system that pays new hires substantially less than current employees make.

Due to conflicting state and federal law, drivers are given bargaining rights, but Capital Metro can't bargain with its employees – hence contractor StarTran's role in the whole process. Wyatt says that StarTran's board has "worked very well with" the union, but that Capital Metro president and CEO Fred Gillam and Cap Metro's attorney, Jeff Londa, have made negotiations nearly impossible. Wyatt claims that Capital Metro is controlling negotiations through Londa, who is also StarTran's attorney. "Fred is pulling [Londa's] strings; he reports to Fred. That's Cap Metro," said Wyatt, adding that he views StarTran President Kent McCulloch as "a puppet" in the process as well. Rick L'Amie, Cap Metro's vice-president of communications, acknowledged that the company receives daily updates from StarTran via Londa. "He [Londa] has been hired by StarTran and therefore reports to Capital Metro like all StarTran employees do," said L'Amie, who was quick to add that StarTran, not Cap Metro, hired Londa and is paying his fees. L'Amie said Cap Metro is not unduly influencing negotiations, despite the regular interaction with Londa.

At Monday's Capital Area Metropolitan Planning Organization board meeting, Mayor Pro Tem Danny Thomas delayed reappointment of Lee Walker to Cap Metro's board over the union's allegations of impropriety (see right); however, Wyatt's critical words may be the only card (albeit a flimsy one) the union holds in negotiations. With no strike funds, and in a state unsympathetic to labor, let's face it: Even if Local 1091 strikes, the transit authority and its contractor have the advantage. Indeed, in Sept. 5 article "Management holds better cards in labor dispute," Statesman traffic columnist Ben Wear noted that the proposed pay rate for new employees is "roughly 16 percent below current wages for new drivers and maintenance workers, cutting the starting pay for a novice driver from about $575 a week to $480." (In a bitterly ironic aside, however, another article from Wear says Cap Metro's 2005-06 budget boasts a surplus and boosts operations spending by the same percentage.)

At least 1091 isn't suffering alone in its labor woes. Norm Couture, president of ATU Local 1549, the UT shuttle drivers union, says he's sympathetic to 1091's plight, as 1549 is also operating without a contract due to "unfair labor practices." Couture claims 1549's contractor, First Transit, is reneging on contract provisions both parties previously agreed upon. While a strike by 1549 is far less likely, the best support the sister unions can provide each other is to promise that neither group will drive the other's routes in the event of a strike. While Couture has nothing to do with 1091's negotiations, he said it's his understanding "that the board wants 1091 to knock their wages back to what we make." In an idea for boosting wages, Couture suggested to the board that the unions combine, "and we all become StarTran workers." Management may have taken Couture's idea and twisted it around, however. "What I was suggesting … was Cap Metro raise us up to the pay of 1091," Couture said, "and it seems what the board wants to do is knock them down to our pay."

Wyatt concurred. "They took that [suggestion] and flipped that on us."

Ever since its approval, the strike option has been described as a last resort. With no movement on salary changes, however, it looks like that's about the only option 1091 has left. In a press release, StarTran's McCulloch defended the dual-wage system, saying "to operate a cost effective and efficient service we believe that our wage and benefit package needs to come in line with wages paid locally and by other Texas transit systems." But the two-tier salary system is untenable, Wyatt said. "If they're trying to cut costs, why give everyone a 3% wage increase, and everyone new less? ... What it means is you're gonna get rid of those people they give that high wage to," Wyatt said. "Every time there's been a two-tier system, management has discharged higher-ranked employees. They'll start firing employees."