As the Katrina crisis subsides, the small victories and the larger questions persist 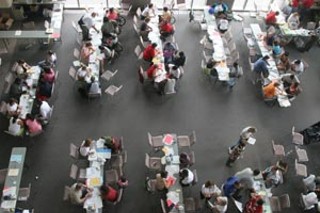 The Red Cross consults with evacuees at the convention center. (Photo By Jana Birchum)

With their biggest test of crisis management behind them – the arrival of several thousand Gulf Coast hurricane survivors in Austin over the Labor Day weekend – city officials this week returned to the mundane job of final approval of a new $480 million budget. Most of the detail work had been completed in advance of Monday's final vote, but the task has now taken on a wholly different perspective, born of Hurricane Katrina.

How these lessons will play out over the long haul is uncertain; the city had already committed this year to replenish funding to social services programs stretched thin from cuts in previous budget cycles. Given the recent turn of events, however, the pre-Katrina allotment for health and human services is already beginning to look insufficient. Federal officials – from Austin's congressional delegates to Vice-President Dick Cheney – have met with Mayor Will Wynn and toured the emergency shelter operations at the Austin Convention Center. All have made assurances that the federal government will reimburse the city for the tab, which is still running, and will continue to run for some time.

Yet even if those assurances are fulfilled, the indirect costs – such as lost convention revenue, overtime pay for police and other city employees, etc. – may be daunting, and are also mounting.

As most of the shelter residents are quick to attest, the convention center is a nice place to visit, but no one wants to live there. The dwindling head count bears that out. Within a week of their arrival, the number of residents had dropped from more than 4,000 to 1,370, as evacuees moved on to new Austin addresses or to join family members in other cities. Victims displaced by the storm are receiving up to $2,000 per household in federal money, city officials say, while local apartment owners are waiving or reducing deposits and offering rent discounts to expedite housing placement for newcomers. As of Wednesday morning, about 984 people remained at the convention center, where a new sense of urgency is driving their search for housing and jobs.

Earlier this week, James Tollerson, a 76-year-old Korean War veteran, didn't yet know where he'd end up. Save for his goddaughter, Leatha Smith of Temple, he has no immediate family, and no immediate plans. Right now, he's more concerned about his dog, Diamond, whom he was forced to leave behind in his apartment in the Midtown section of New Orleans. He doesn't know if Diamond has been rescued or not, and Internet searches for the black-and-white shih tzu bear no clues. 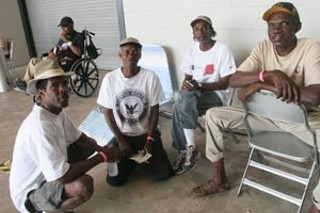 "We'll get you another dog," his goddaughter promised Tollerson during a visit on Sunday. But for Tollerson, who is wheelchair-bound after losing his left leg to an infection four years ago, his beloved Diamond is irreplaceable. "I intended to wait it out," Tollerson said of the hurricane. "But they ordered everybody out of the apartment complex." In his wheelchair, Tollerson sat chest-deep in water as a friend pushed him down the street until the two of them were rescued. Leatha Smith, meanwhile, had launched a Web search for her godfather and was relieved to find him safe, miles from New Orleans but only about an hour's drive from her home. On Sunday's visit, she brought with her a cousin, Debbie Day, who is still searching for her missing husband, Lawrence Day Jr. She last spoke with him Aug. 23, days before the storm hit New Orleans. "We had separated before the hurricane," she said, "but I just want to know that he's okay."

From Crisis to Community

As it happened, the city's crisis management process was not without incident. In their haste to organize relief efforts for the first wave of arrivals, city and local Red Cross officials neglected to include African-American ministers and community leaders in the early stages of planning for the anticipated influx of Louisianans. In a widely circulated e-mail two weeks ago, the Rev. Sterling Lands, pastor of Greater Calvary Baptist Church, angrily recounted how when he attempted to offer counseling to the evacuees, he was denied entry into the Burger Center, the first stop for the hurricane victims seeking a place to stay. "The Red Cross is rejecting offers to help if you do not have Red Cross experience and especially if you are Black," Lands wrote. Statesman editorial page writer Alberta Phillips followed up Sept. 8 with a blistering commentary on the city's "segregated responses" to the largely African-American victims of the hurricane.

"The concern was that the African-American community wasn't involved from the very beginning," said Austin Human Rights Commission Chair Bill Hale. "And I think it would have been important to involve the African-American leadership, including the ministers, at that time." Once black leaders expressed their dismay to city officials, Hale said, he did see African-American ministers providing counseling to victims at the convention center. Overall, though, Hale praised the Red Cross' response efforts. "The Red Cross is light-years ahead of FEMA," he said of the much-maligned Federal Emergency Management Agency. 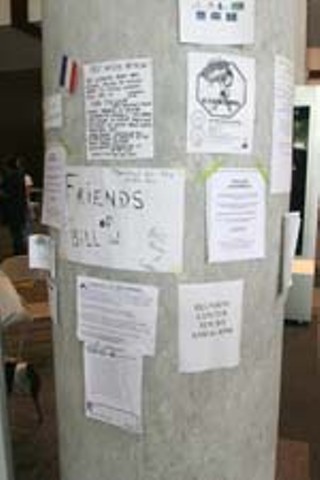 Every pillar became an instant billboard: people looking for family and friends. (Photo By Jana Birchum)

Nevertheless, the local Red Cross was stung by earlier criticism. "The Red Cross is the most neutral organization on the planet," said spokeswoman Claudia McWhorter. "We were operating under a crisis mode." But, she added, "What we've learned is that we can't do this alone. It takes all community leaders and all different types of organizations to come together. We all need to be on the same page."

Meanwhile, black community activists have launched several independent relief efforts, including one that grew out of a chance encounter between Austin resident Michael Lofton and a stranger who asked for directions to Motel 6. That was the Tuesday after floodwaters began pouring into New Orleans and three days before evacuees began arriving by buses and planes. As Lofton recalls, he was sitting inside a Popeyes restaurant on Airport Boulevard when he was approached by a man seeking directions. "I walked outside with him to show him where to go and I saw three carloads of people, and I saw their Louisiana plates," he said. The caravan included schoolteachers, licensed security guards, and a diabetic woman in her 60s in need of syringes for her insulin, Lofton said. He personally led the way to the motel and gave the man his card. Later, Lofton sent an e-mail to several ministers, who pooled their resources to cover a week's stay for the family at the motel. Since then, Lofton and other volunteers have set up operations in a borrowed facility at 1154 Angelina, in East Austin, and have helped find housing for about 75 families so far, he said. The grassroots effort is functioning under the auspices of the Community Action Development and Assistance organization, a program that New Hope Baptist Church founded about a year ago, said Lofton, a longtime church member who also hosts a talk show on community cable.

"A lot of the people that we're helping didn't start out at the convention center, and some were even turned away from there because they weren't part of the evacuation process," Lofton said. "But we're coordinating with the city and making sure they get registered with the city and with FEMA." (The Red Cross has since opened a second service center, at 3811 E. 12th, to extend the same assistance to evacuees who are not staying at the convention center.) While the unprecedented outpouring of support from Central Texans has indeed forced the Red Cross to turn away hundreds of volunteers, Lofton agreed with Lands' assessment that the organization could have, or should have, accepted the offers of local black residents wanting to volunteer their time. "I don't want to turn this into a racial issue," Lofton said, "but our volunteers really want to just cut through all that red tape and hug someone. To us, they're not just 'Victim No. 542.'"

It goes without saying, unfortunately, that FEMA was of little help. It wasn't until last Thursday – nearly a week after the evacuees began arriving in Austin – that a FEMA crew set up shop at the convention center, prompting a number of side jokes all around. "I think FEMA is a myth," said Mike Sheffield, president of the Austin Police Association. "We didn't see them here on the ground until yesterday [Sept. 8]. Before that it was nothing but promises, and these evacuees here are tired of promises."

Wynn sought to drive home the city's disappointment in FEMA. In a written statement following his meeting with Cheney on Saturday, Wynn said, "I told, even showed, the vice president how successful we have been in Austin to date, but that now FEMA has to deliver."