The scene Wednesday evening outside the gates of the Capitol seemed almost like the preview to an outdoor concert, as the sweltering crowd awaited the arrival of the star performer. At about 5:30, two buses pulled up a converted navy-blue school bus, and a Ford E-450 Super Duty truck hauling a Winnebago christened The D.C. Express. Working her way down off the bus and through the crowd to a microphone was none other than Cindy Sheehan, the Gold Star mother who has spent the last month waiting outside President Bushs ranch at Crawford, waiting for an answer to one question: Why did her son Casey have to die in Iraq?

"God bless you for your strength, God bless you for what you do," said Austin Sen. Gonzalo Barrientos in welcome, adding, "Godspeed!" Austin is the first stop in Sheehan's cross-country "Bring Them Home Now!" tour that will culminate Sept. 24 in Washington, D.C., in what could become the largest anti-war protest the country has seen at least since the Vietnam War.

Sheehan took her place at the front of the crowd and led a massive protest south down Congress Avenue. Surrounded by a small battalion of Austin police, the ranks of several hundred protesters stretched more than three city blocks as they wound their way, in the 100-degree heat, to City Hall: hippies, anarchos, and punks; the elderly, young, and children; straights, gays, and lesbians; workers and students – a cross-section of the people of Austin. 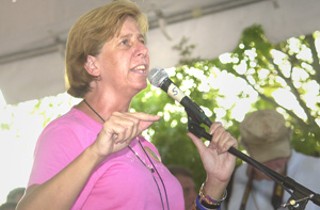 Once the crowd arrived at City Hall, they were greeted by hundreds more.

Members of Gold Star Families for Peace, Military Families Speak Out, Iraq Veterans Against the War, and Veterans for Peace spoke before Sheehan took the mic; country supergroup the Flatlanders (Joe Ely, Butch Hancock, and Jimmie Dale Gilmore) proclaimed Hancock's anti-war anthem, "The Damage Done" – i.e., abroad and at home – a cappella. Populist author and agitator Jim Hightower congratulated the crowd for "daring to challenge King George the W" and his "messianic, testosterone-driven crusade to make the world safe for Halliburton." Alluding to the nation's snowballing disapproval of Bush and his war, Hightower intoned, "It only takes a spark to ignite a prairie fire. We've got our spark in the form of Cindy Sheehan."

Greeting the crowd, the Californian Sheehan said this is her fourth visit to Austin; her son Casey had been stationed at nearby Fort Hood. "It's so hard to be here without him," she said, and then apologized for her appearance. "One of these days, you'll see me with my hair brushed and make-up on," she promised, having arrived straight from Camp Casey. Upon leaving the site she founded a month ago, Sheehan "never thought she'd be sad to leave" the camp's chiggers, rattlers, and fire ants. Amazed by its transformation into one of the most "wonderful, life-affirming, pro-life places in America," Sheehan said, "I really believe Camp Casey will be given credit for ending the illegal occupation of Iraq."

In her attempt to discuss her son's death with the commander-in-chief, Sheehan insisted she isn't brave, but fearless; surviving her son's death was already the worst thing that could have happened to her. Addressing the president, Sheehan said, "You keep saying my son died for a noble cause," yet that cause is in constant flux. "He can't say 'freedom and democracy,'" Sheehan said, pointing to Iraqi constitutional drafts severely limiting the rights of women. Bush's latest explanation – that the fight continues to honor the fallen – angers her even more. "Mr. President, you mean you're willing to kill more Americans because you've killed so many already?"

"We have to hold him accountable. ... We know he lied, and we know he knows he lied," Sheehan concluded, referring to the Downing Street memo's evidence of the administration "fixing" prewar intelligence to justify the war.

A much smaller crowd, perhaps two-dozen counter-protestors, was assembled across the street from City Hall, speaking out against Sheehan and the rally. One person held a poster with a peace sign under the heading "Footprint of the American Chicken." "I wonder how many people across the street are willing to sign up [for war service]," Sheehan asked, emphasizing the best way to support American troops would be to bring them home, or failing that, to equip them with adequate armor and ammunition.

Earlier Wednesday, Sheehan met with the staff of dyed-in-the-wool Democrat Rep. Lloyd Doggett, whom Sheehan said is "100 percent" behind her cause. The next day, she seemed destined for a chillier reception, as she was hoping to "meet with Mr. Tom DeLay in Houston." (DeLay's office announced earlier this week that he "does not have the time" to meet with Sheehan.) Amidst cacophonous boos at the mention of DeLay's name, Sheehan said she knew DeLay opposes withdrawal from Iraq, supposedly so as not to provide "a timeline" to the terrorists. "Their policy is to recruit [for] and promote terrorism," she responded, "not to give them a timeline."

With the magnitude of Hurricane Katrina's tragedy still unfolding Wednesday, the route of Sheehan's bus has had to be adjusted. And Sheehan said the busses caravanning into Houston contain as many as 10,000 pounds of food and supplies left over from Camp Casey, which will be donated as rations for the displaced people beginning to arrive at the Astrodome.

Three busses will be touring the northern, southern, and central swath of the states on their way to D.C., meeting (or attempting to meet) members of Congress, to ask them the same question Sheehan has for Bush: What is the "noble cause" of the Iraq war that has killed nearly 2,000 Americans, and incalculable numbers of Iraqis? Moreover, Sheehan says she wants to know, if any members of Congress claim to oppose the war, what are they doing to stop it?

The heat on the crowd finally relented a bit as the sun set behind Town Lake. Sheehan promised her Austin audience that she would ask our leaders how many more Americans must die for Bush's visions of empire. "Their answer better be," she said, "'Not one more!'"