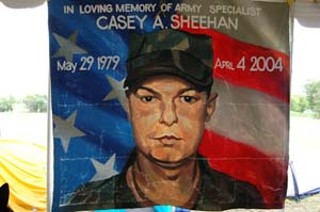 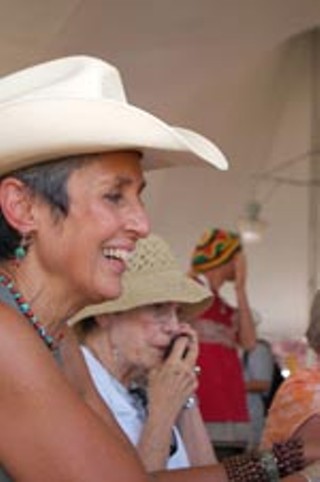 Joan Baez returned to Camp Casey early Saturday and stayed through most of the day. (Photo By Roxanne Jo Mitchell)

Photographer Roxanne Jo Mitchell and I went to Crawford, Texas, to witness and participate in the convergence of rallies in this small Texas town on the last sweltering weekend of August. Here is a small sampling of what we experienced. 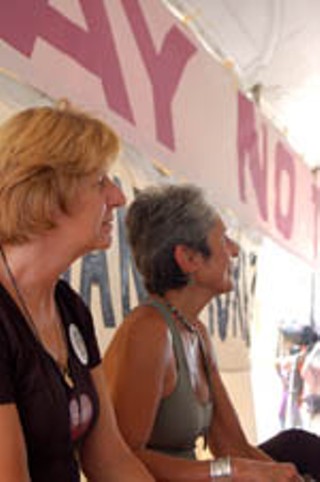 As we round the last bend on the lazy, meandering road to Camp Casey, a modest white church peeks out from the brush. This day, the idyllic country landscape contains another compositional element – Camp Casey itself. Across the road from the church, brilliant white spires of a modern tent pavilion cut sharp contrast to the rolling fields of Americana and electric blue of the day's clear sky. As the road straightens, hundreds of cars and a number of buses emerge. 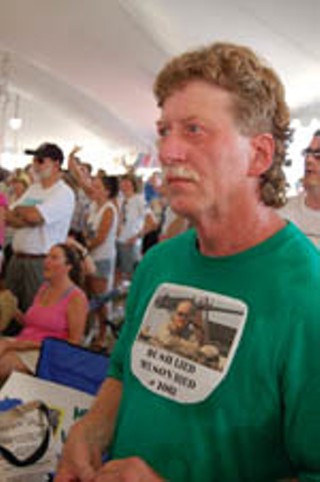 Campers cluster around our vehicle and offer warm, August greetings. The energy is thick and contagious. We unload passengers. I've volunteered to use my big, blue station wagon as a shuttle for the day to haul passengers and provisions to and fro between the roadside encampment and the Crawford Peace House, about 15 miles from camp and a stone's throw across the tracks from the only intersection in town. Upon our grand Casey entrance into what is essentially a dusty ditch between a pasture and the road, embellished by a lovely rented tent that can accommodate the thousands that are expected here today, I learn that my license tag is dangling by one thread of wire and jump out to scavenge and improvise a fix. The delay is fortunate. It keeps me at Casey long enough to see the eager receptions given to each new bus that rolls in. As I look over to smile at the camaraderie of growing numbers, a familiar face lights the crowd. Joan Baez has returned to Camp Casey. 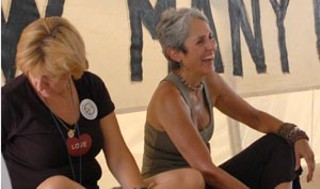 Baez made news the week before, strumming and singing for the peaceful protesters and meeting with the woman the people now call the Peace Mom. Cindy Sheehan's one-woman protest, supported by Gold Star Families for Peace, Veterans for Peace, and Code Pink and sponsored by the then meager offerings of the Crawford Peace House, has snowballed despite the hellish Texas heat, both literal and metaphoric. This town, after all, is pro-prez, not the most inviting of environments. Baez apparently understood what her first appearance did to bolster the spirits of the growing mass of protesters, so she returned. 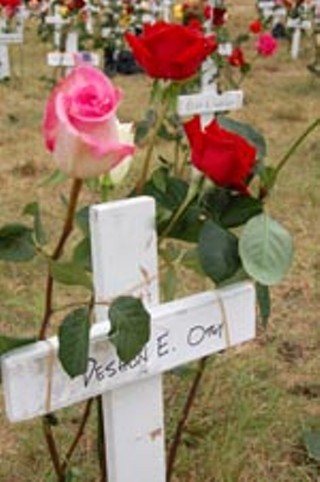 I ask her what she would say to those newcomer activists, those new brave who have never before spoken out against their government, or the young who have never seen up close the power of a galvanized positive social movement. A shy smile crosses her lips as her eyes find their mark; she leans in and softly but sharply whispers, "Welcome!" 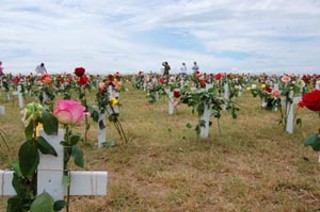 On Sunday, Camp Casey's makeshift memorial of 300-plus white crosses, "Arlington West," was draped in a wave of roses. (Photo By Roxanne Jo Mitchell)

Admirers gather close for their chance to chat up the peace movement icon. Glistening soccer moms and folks unaccustomed to the heat are treated with a special annointing from Joan, who sweetly pours ice-cold Ozarka over their heads. 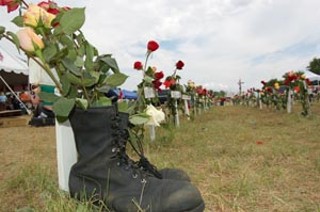 I return to shuttle runner, meeting folks who had just traveled from Chicago, New York, Mendocino ... or just caught a ride in from Austin, Dallas, San Antone. Three hours later, after the fourth or 14th run (it's a bit of a blur), I beeline for the now legendary food line. Reports of a "catered affair" are exaggerated, but the love and goodness on the spread born out of massive donation efforts is impressive. Problem is, the crowd is, at this point, now in the thousands, and I am a little late. I find a nice lady carving up an apple pie and settle in at the "Newspaper" table with a fork, contemplating my approach. 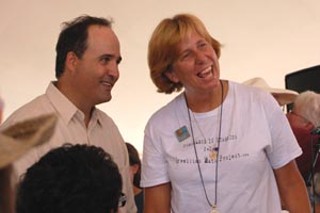 Groom-to-be Peter Ravella confers with Cindy Sheehan prior to the nuptials. (Photo By Roxanne Jo Mitchell)

The scene begins to swirl. Temps are triple digits in the shade, and despite a constant flow of bottled water, I haven't had anything since 7:30am and really really want to devour this pie. Barely paying attention to the commotion near the front of the stage, I adjust my seat to get a better gander. A young mother is in my line of site, with baby in arms, and as she shifts her weight, I see that Joan Beaz is onstage. 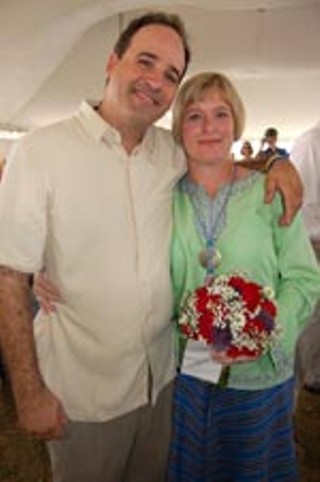 "Virgil Cane is my name ..." she begins, and the crowd goes crazy. I am sitting delirious, putting some damn fine pie in my pie hole, and Joan is singing not only about the tragedy of war, but about the incivilities of a nation divided. Before the apple pie makes its way into my mouth, I am reminded by an unexpected taste that the salt of tears is no different from the salt of sweat. And that blood running on both sides is why we are here. I wonder if it is so great to be an American? My pal Rachael makes her way over, and I ask her if it is. 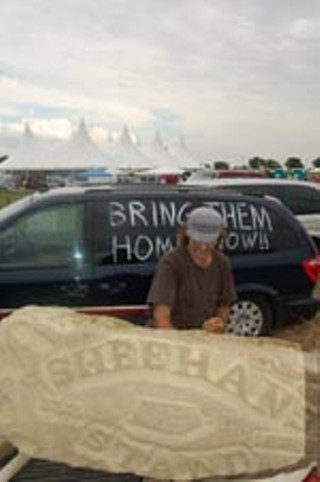 "It's good to be in positive American company," she grins. Apple pie. Mom. Cindy Sheehan. It's all too much. Ms. Sheehan and Baez are trading quips and stage time, much to the delight of a crowd in the mood for a change from the somber.

Making my way around the crowd that is now elbow-to-elbow in the 3,000 capacity tent pavilion, I hear Jeff Norman from U.S. Tour of Duty from the stage. He is only interrupted by explosions of cheering and applause. "This week in Texas, the crowds have been big and enthusiastic. Donations are way up! Two uniformed, on-duty Houston police joined the vigil there: One held a candle."

After my pie and a good cry, I take a few moments to stand amidst Arlington West, the makeshift memorial of more than 300 white crosses to honor the Iraq war dead. It's all too overwhelming. I jump back in the wagon to pick up more passengers and for a provisions run to the Peace House to help stock the camp kitchen.

The Burns Sisters from Ithaca, N.Y., are here to sing. Air America's Brad Show is broadcasting live. There are rumors that Martin Sheen is coming.

As Cindy Sheehan has been joking all day from the mic, "Just another day at Camp Casey."

My friends Genevieve Van Cleve and Peter Ravella have invited me to their wedding. I am happy that I do not have to leave the camp to attend the nuptials. Cindy Sheehan has given her blessing, and the wedding will happen at Camp Casey at 4pm. I have just missed the Sunday morning service by the Rev. Al Sharpton. The mood today is lighter and more at peace. The day's crowds fluctuate at any given time in the more manageable range of 500-1,000. Peter and Gen sit for an interview with the Waco Trib. They were so moved by what they saw and felt on their earlier visit to Camp Casey that the preparations for their upcoming wedding began to feel hollow. "We want people to come out and see this," Peter says to the young reporter. "A lot of these people have never spoken out about anything in their lives!"

The wedding is simple and breathtaking. A few of us take some of the remaining roses from the morning services and attempt to gild the dusty path of hay for the bride. The crowd hums "Here Comes the Bride," and Peter and Genevieve exchange vows and make history.