How to Keep Water in Central Texas

Long-range planning tries to cover multiple bases, but some say environment is left out 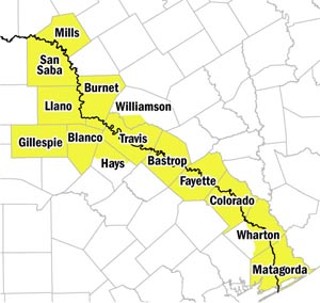 Region K comprises a 14-county area along the Colorado River from Mills County to the Gulf of Mexico. Environmentalist are concerned that long-range plans to protect the lower Colorado's water are geared only toward human consumption and agriculture and not enough toward recreation and preservation of ecosystems.
Click here for a larger image

Every year brings more people to Central Texas, and with them more lawns to water, SUVs to scrub, and toilets to flush. As the population grows, some fear that a time may come when we're sucking so much water from our streams that Austinites hoping to row, row, row their boats will have nowhere to do so but bumpily down a dry bed of gravel. As Austinites get their chance to weigh in on a plan to apportion the water in the Colorado River, some environmentalists are expressing concern that it doesn't go far enough to make sure that rivers keep flowing in dry times.

"If there's not an allotment [in the plan] to make sure the rivers flow, we're not going to have rivers, or they'll be disgusting and you won't want to get in them," said Diane Wassenich of the San Marcos River Foundation.

The plan goes by the catchy moniker of the Region K Water Plan; the group that developed it is holding a hearing in Austin on Wednesday, Sept. 7. Region K is a 14-county area that follows the Colorado River's arc from Mills County northwest of Lake Travis until it spills into the Gulf of Mexico. The goal of the plan is to ensure everyone has enough water in a "drought of record" situation of the sort that parched Central Texas in the 1950s. In such a time, models estimate that the Lower Colorado region will have 1.3 million acre-feet per year of water, mostly from the river itself (about a quarter of the area's water supply is underground.) Currently, we're using about a million acre-feet a year, most of which goes toward irrigating rice paddies and hydrating livestock operations downstream from Austin.

By 2060, however, the region's population will have doubled and we'll probably be sucking up the whole 1.3 million. At that point, a drought could result in water shortages. The plan includes ways to make use of every drop, such as by planning for reuse and a massive investment in reservoirs to keep San Antonio hydrated. Still, the possibility remains that some summer out there will be dry enough for the demand to outpace supply.

Once the Region K plan is incorporated into the state plan developed by the Texas Water Development Board, it becomes an advisory document, not the law of the land. The agencies that do decide who gets what water – particularly the Texas Commission on Environmental Quality, which divvies up surface water permits – are supposed to make any permitting and regulatory decisions conform to the plan. That way, when things get dry, there will still be enough water for all the stakeholders in the region – defined as cities, livestock, irrigated agriculture, power generation, mining, and manufacturing.

Careful readers will note that "the environment" didn't make that list. "That, in our view, is a gaping hole in the planning process," said Jennifer Walker of the Sierra Club, who serves on the Region K planning team. "There's no mechanism for leaving water for recreation in the rivers." The Sierra Club and other environmental groups are urging the Region K team to include "environmental flows" as a stakeholder – if not now, then in the next update, five years down the road. Others, however, say sufficient safeguards are in place.

With rights to 2.2 million acre-feet a year, the Lower Colorado River Authority is already the largest water-rights holder in the basin. The largest component of the Region K plan – a pipeline project to transfer LCRA water to the San Antonio Water System – contains several legislative mandates requiring LCRA to keep the rivers wet and running into the sea. Simply stated, current laws would require LCRA to cut off San Antonio before letting the water dry up, although drought contingency plans are supposed to keep anyone from actually having to make that choice. Plus, Mark Jordan of the LCRA points out that conservation strategies tied to the SAWS project will create about 118,000 acre-feet of "new" water in the basin each year. (In dry times, the project will also draw water from the Gulf Coast Aquifer.) To Barbara Johnson, who represents local industries on the Region K team, the LCRA is well equipped to protect against a dry river scenario. "Part of [LCRA's] responsibility is managing water resources for recreation," Johnson said. "If they kill off all the fish, that kills off what they're charged with managing." In fact, Johnson thinks the conservation goals are on the overambitious side.

Still, reduced flows are already taking a toll downstream. For James Arnold, a commercial fisherman turned tour guide in Matagorda Bay at the Colorado's mouth, river flow is a top concern. Chatting by phone on a blazing Saturday afternoon, Arnold explained he switched from fishing to tourism because there just aren't enough fish any more to keep the industry alive, in part because of higher water temperatures. "I'm sitting out here in my barn and the sun is literally burning me to death," he explained. "Twenty years ago, it didn't have that effect. We're changing. Our atmosphere is changing. Our bays are changing." Still, he agrees with Johnson that the LCRA has his best interests at heart. "I depend upon them wholly to make sure we have our water down here," Arnold said. "I think the LCRA is going to do what they need to do to protect the interests in Matagorda Bay."

An alternative explanation for the changing bays – including large fish kills that Texas Parks and Wildlife reported along the coast this month – is overuse of river water. When less fresh water pours into the sea, bay water salinity increases. High-salinity water holds less oxygen for fish to breathe; if it gets stagnant enough, they die.

As the region changes in the decades between now and 2060, the water plan will change as well, reflecting the competing needs of fishermen and rice farmers, kayakers and golfers, and everyone else who drinks, bathes, or swims in Central Texas.

The Region K water planning group will hold a public hearing on the plan on Wednesday, Sept. 7 at 6pm at One Texas Center, 505 Barton Springs Rd., third floor. For more info about the plan, contact www.regionk.org.