Point Austin: A Lege Too Far

Sine die or school bells, perhaps they toll for thee 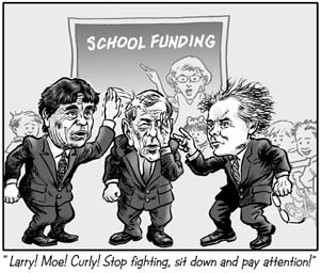 Unless you run a Downtown restaurant, you probably missed the news, but the Legislature scuttled ignominiously out of town last week, just in time to allow the real schoolchildren to get their bearings on the fall semester. It's just as well – during House Speaker Tom Craddick's singular attempt, earlier this year, to provide a school-friendly occasion for the TV cameras, he managed to radically misstate the number of U.S. senators and congressmen to a classroom of impressionable middle-schoolers. Let's hope they weren't taking notes.

Alas for the speaker, the Capitol press corps was taking notes, and the last week hasn't been a pretty one for legislative dispatches. Every editorial board in the state has been beating up on the leadership for weeks, and after the last real possibility of a school finance plan collapsed three weeks ago in a muddle of conflict between Craddick's fractious House and Lt. Gov. David Dewhurst's more tractable Senate, the most common press conference refrain became "Why are we still here?" Last weekend's sine die commentary brought much more of the same, topped by the Houston Chronicle's Clay Robison comparing – unfavorably – the triangular political slapstick of Craddick, Dewhurst, and Gov. Perry to a revival of the Three Stooges.

We'll spare no sympathy on Ricky, Davey, and Tommy here, although in fairness to Craddick he told anybody who would listen months ago that, lacking all consensus on school finance, it was a fool's errand for the governor to call the Lege into special session at all, let alone twice. Now they'll wait for a Supreme Court decision to focus their minds, although in the not very secret hope that the Republican court will somehow overrule Judge John Dietz and conclude that, unconstitutional or not, the current Texas public school system is good enough for government work – and more pointedly, good enough for the legions of mostly nonwhite and nonsuburban youngsters swelling Texas enrollments for the foreseeable future.

The basic contradiction remains that although Texans insist by survey and expressed sentiment that they endorse greater financial support for public education – even if it means higher taxes – they go right on electing politicians ideologically committed to no new taxes (unless clumsily disguised as "fees") and, consequently, committed to starving the state's largest financial responsibility, the public schools. Of the Big Three, only Dewhurst has shown any genuine interest in finding a solution – via a broad-based business tax that might partially address the structural shortfall – but he has been unable to summon the political muscle to get it done. The governor, in deference to his anti-school, anti-tax mentors James Leininger and Grover Norquist, is content to hold the schools hostage to property tax cuts, on the reasonable gamble that nobody ever lost a Republican primary by promising lower taxes.

As for Craddick, he's been honest enough to express the frank GOP hostility to public education that the others are too polite (or too cautious) to mention. He laid the entire blame for the Lege's failure at the feet of the school superintendents, telling the San Antonio Express-News' Gary Scharrer, "All they want is money," as though the Dietz decision – that state support for the schools is both inefficient and inadequate – was simply a school administrator's fantasy. And he explicitly used the recent federal "accountability" ratings, in theory a mechanism for motivating school improvement, as the ideological bludgeon they have increasingly become. The speaker pointed to the new, more rigorous rankings as de facto evidence of failure, concluding, "You think the average Texan wants to keep putting money into the system that's not making it? I don't think so."

Unfortunately, by that standard Craddick's Legislature, which spent millions in time and money doing precisely nothing about school finance, should henceforth call it quits.

That's not to say our august leaders accomplished nothing during their feckless summer sojourn in Austin. More than one pundit has pointed out that they managed to raise the salaries of judges – coyly padding their own eventual pensions in the bargain. And they finally responded to the desperate entreaties of SBC Communications, allowing the telecom giant to horn in on the sweetheart markets of the cable companies – your guess is as good as mine whom to root for in that elephants' mud-wrestle.

Those items say much about the priorities of our elected representatives, and especially the leadership, particularly when juxtaposed with their failure to do anything about school finance. The argument for judicial pay raises was all about keeping good judges on the bench, judges who otherwise might flee back into private law firms where private profit pays much better than public service. Did we hear a word about mercenary lawyers, or about judges not wanting judicial "reform" in return for higher salaries? Did Tom Craddick complain, when Chief Justice Wallace Jefferson berated the Legislature for failing to hike judges' pay, that "All he wants is money"? Yet the very same argument in favor of raising teacher pay is dismissed as greed and intransigence.

Teachers, school administrators, and the vast army of low-paid school staffers can now wait once again for the courts – and then perhaps newly cowed legislators – to recognize the state's responsibilities to the community and the schoolchildren, and to find the political will and the simple pragmatic common sense to adequately fund Texas schools. As for the rest of us, perhaps we can ponder the average level of political involvement in Texas communities, and wonder if we're really getting the leadership we deserve.