Burnet to Travis ME: we want our money back

Tweet
print
write a letter
Burnet County commissioners are asking Travis Co. officials to refund $1,800 the county paid to the Travis Co. Medical Examiner's Office last year for a June 2004 autopsy that the TCME office botched by misidentifying the burned remains of an 81-year-old woman as those of a 23-year-old man.

Former Deputy Medical Examiner Vladimir Parungao, who left the office in January, initially identified the charred remains, which had been found in a car that had been set on fire, as those of Clayton Wayne Daniels – "there was a small segment of penis noted," he reported, and noted finding a small amount of urine in the corpse's bladder, which was matched to Daniels', according to the Houston Chronicle. Unfortunately, the body was actually that of an already deceased 81-year-old woman whom Daniels and his wife had placed in the car, along with Daniels' shoes, in order to fake Daniels' death so that he could avoid a 30-day stint in jail. Daniels and his wife were subsequently sentenced to 20 years in prison for the scheme. Burnet officials are now wondering whether Travis Co. actually performed an examination – in part, they noted that there should've been formaldehyde and not urine in the woman's bladder. "They've got some serious explaining to do," Burnet Co. Attorney Eddie Arredondo told the Houston daily. 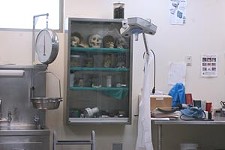 Travis County ME: Who's on First?
Lots of finger-pointing over who's to blame