A message to the Crawford memorial vandal 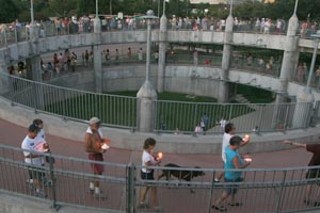 Anti-war protesters met on the Pfluger Pedestrian Bridge spanning Town Lake on August 17 for a candlelight vigil in support of Cindy Sheehan. (Photo By Jana Birchum)

As reported here and elsewhere over the past week, Cindy Sheehan, the mother of a slain Iraq war soldier, has set up camp outside President Bush's ranch in Crawford, demanding a meeting with the president. She and supporters also set up a memorial of hundreds of small white crosses, each bearing the name of a dead Iraq war soldier. On Monday, Aug. 15, a vandal driving a pickup truck dragging a pipe and chains ran through the memorial, knocking many of the crosses down before getting a flat tire and being arrested. The vandal was identified by police as Larry Northern of Waco.

Perry Jefferies of Copperas Cove is a member of Operation Truth, a group of Iraq Vets trying "to connect the American public with Veterans and Troops and empower citizens to support the Troops and become more engaged in our nation's decisions regarding how our military is used and cared for." Jefferies tracked down an e-mail address for Northern and sent him the following letter, which Naked City thought worthy of reprinting.

I am a Veteran of the Iraq war, having served with the 4th Infantry Division on the initial invasion with Force Package One.

While I was in Iraq, a very good friend of mine, Christopher Cutchall, was killed in an unarmored HMMWV outside of Baghdad. He was a cavalry scout serving with the 3d ID. Once he had declined the award of a medal because Soldiers assigned to him did not receive similar awards that he had recommended [them for]. He left two sons and a wonderful wife. On Monday night, August [15], you ran down the memorial cross erected for him by Arlington West.

One of my Soldiers in Iraq was Roger Turner. We gave him a hard time because he always wore all of his protective equipment, including three pairs of glasses or goggles. He did this because he wanted to make sure that he returned home to his family. He rode a bicycle to work every day to make sure that he was able to save enough money on his Army salary to send his son to college. At Camp Anaconda, where the squadron briefly stayed, a rocket landed inside a tent, sending a piece of debris or fragment into him and killed him. On Monday night, August [15], you ran down the memorial cross erected for him by Arlington West.

One of my Soldiers was Henry Bacon. He was one of the finest men I ever met. He was in perfect shape for a man over forty, working hard at night. He told me that he did that because he didn't have much money to buy nice things for his wife, whom he loved so much, so he had to be in good shape for her. He was like a father to many young men in his section of maintenance mechanics. They fixed our vehicles with almost no support and fabricated parts and made repairs that kept our squadron rolling on the longest, fastest armor advance ever made under fire. He was so very proud of his son-in-law [who] married the beautiful daughter so well raised by Henry. His son-in-law was a helicopter pilot with the 1st Cavalry Division, who died last year. Henry stopped to rescue a vehicle belonging to another unit on what was to be his last day in Iraq. He could have kept rolling – he was headed to Kuwait after a year's tour. But he stopped. He could have sent others to do the work, but he was on the ground, leading by example, when he was killed. On Monday night, August [15], you took it upon yourself to go out in the country, where a peaceful group was exercising their constitutional rights, and harming no one, and you ran down the memorial cross erected for Henry and for his son-in-law by Arlington West.

Mr. Northern – I know little about Cindy Sheehan except that she is a grieving mother, a gentle soul, and wants to bring harm to no one. I know little about you except that you found your way to Crawford on Monday night in August with chains and a pipe attached to your truck for the sole purpose of dishonoring a memorial erected for my friends and lost Soldiers and hundreds of others that served this nation when they were called. I find it disheartening that good men like these have died so that people like you can threaten a mother who lost a child with your actions. I hope that you are ashamed of yourself.