Rocha grand jury raises as many questions as it answers 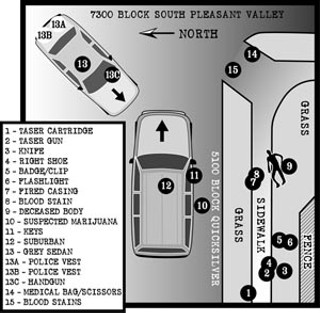 This diagram – based on a similar one in the released grand jury notes – lays out the scene of the Daniel Rocha shooting and shows among other things that Officer Julie Schroeder's Taser was not in Rocha's possession at the time he was shot.
For a larger image click here.

There is, at least, one thing on which every witness to the police shooting of 18-year-old Daniel Rocha agrees: The intersection at Quicksilver Boulevard and South Pleasant Valley is poorly lit. So it was quite dark there on the night of June 9, when Rocha was killed by a single 9mm bullet fired by Austin Police Officer Julie Schroeder.

Officially, Rocha was killed during a struggle with police after an SUV he was riding in was stopped at the intersection in connection with an undercover drug investigation. During the struggle Schroeder lost her Taser gun and, believing that Rocha had taken it and was about to use it on her sergeant, she drew her pistol and fired a single shot into Rocha's back. But Schroeder was mistaken; Rocha didn't have the Taser – investigators found it later in some tall grass, about six feet away from Rocha's body. "There was a bunch of chaos," witness Stephanie Pesina said in a sworn affidavit to police the day after the shooting. Pesina was walking nearby when the shooting occurred. "The lighting out there is bad because the neighbor kids break the street lights," she explained. "There was a bunch of commotion."

"A bunch of chaos" seems accurate; other than a general consensus that it was dark, there is little that the witnesses agree on concerning what occurred in the moments leading up to Rocha's death, according to documents released Aug. 16 by the Travis Co. District Attorney's Office. Earlier that morning, the DA's office had announced that the grand jury considering the Rocha case had returned a no-bill against Schroeder, meaning the jurors did not find evidence that Schroeder should face criminal prosecution for Rocha's death. That decision has angered some, but surprised few. "We are very disappointed," said attorney Bobby Taylor, who's representing Rocha's mother, Daniela Rocha. The fact that the investigative documents released last week – including official police reports, scene reconstruction diagrams, and sworn statements from officers and civilians – reflect confusion over what happened that night has left ample room for continuing speculation and distrust.

What is clear is that on the evening of June 9, Schroeder, her partner Officer Michelle Borton, Sgt. Don Doyle, and several other members of the APD Southeast Area Command's Street Response Unit were in the Dove Springs neighborhood, conducting an undercover drug investigation centered on a house in the 1800 block of Bitter Creek and a convenience store two miles away. Borton told investigators that she knew the woman living at the target house to be a crack user, and that the woman often went to the convenience store to use a pay phone for "short phone calls," lasting between 30 and 60 seconds, before going back to the house. The routine, police surmised, was connected to her drug use. The woman (among others) would use the phones to call "mobile dealers," Schroeder said, who then deliver drugs to a "designated place and time" – in the woman's case, allegedly at her residence on Bitter Creek. On June 9, officers staked out the neighborhood, watching both the phones and the house. As expected, the woman got a ride to the store, made a couple of calls, and then returned to the house. Shortly thereafter, the Chevy Suburban Rocha was riding in pulled up to the house. A cop stationed nearby said he saw a hand-to-hand "exchange" between the woman and the passenger in the front seat (whom cops would later identify as Ricky Ulfeng), before the SUV pulled out of the drive and headed away. That information was radioed to Borton and Schroeder, who were in one car, and to Doyle, who was stationed nearby.

Doyle pulled out to follow the SUV while Schroeder and Borton, with the help of car registration information gathered from their in-car computer terminal, correctly anticipated that the Suburban would soon arrive at the Quicksilver/Pleasant Valley intersection. "I felt we had enough probable cause to stop the vehicle from the prior surveillance and activities at the target location," Doyle said in his statement.

When the three vehicles converged at the intersection, Schroeder and Borton took the lead. Schroeder activated her car's lights and the spotlight, which she trained on the SUV. "Officer Schroeder positioned our unit facing the SUV. I got out ... and approached the driver," Borton recalled. "While getting out of our unit [Ulfeng] got out and jumped over a wooden privacy fence." Borton shined her flashlight into the SUV, she continued, and "immediately" recognized that the backseat passenger was Daniel Rocha, whom she and Schroeder had been looking for to arrest on an outstanding felony warrant for theft. (On May 31, while on probation for an earlier burglary, Rocha had allegedly stolen a wallet from a woman at a McDonald's.) Borton said she told Rocha to stay put while still keeping an eye on the driver, later identified as Donny Hernandez.

That's when things started to go wrong: "I saw Rocha open the back right door," Borton recalled. "As he got out of the vehicle, I immediately observed ... Schroeder tangled up with [Rocha] as it appeared that he was trying to move past her," Borton continued. "This encounter is best described as Rocha attempting to run through her." Schroeder said she also recognized Rocha, and was "thinking I need to contain him inside the vehicle because I don't want him to fight and run," she said in her statement. "[I]nitially [Rocha] was relaxed and cooperating and he was raising his hands and asking me what was going on." Then, "[a]ll of a sudden he tenses up and then he lunged at me. The fight is on. He was grabbing at my chest and body. He is using his force to try to get past me." Schroeder was wearing a police vest with two Velcro pockets where she kept her Taser, badge, and a blue folding knife. "The fight was happening while still inside the vehicle," she said, until Rocha managed to push past her, and Doyle ran toward her and tried to help Schroeder subdue him.

But Rocha continued to fight, Schroeder said, and the three of them wound up on the ground. Rocha's "arms are on the inside of me and I could feel him grabbing at my vest and waist," Schroeder recalled. "Rocha's body comes off me and lunges toward Sgt. Doyle. I'm pawing at my vest to look for my [Taser] ... I was looking for it to use on Rocha. I have been in a number of fights before and never have I felt this scared and afraid. I was focused on Rocha's white shirt. I felt for my Taser and it was gone. ... Instinctively I grabbed for my gun and shot him once." Rocha lunged forward and fell over, Schroeder said.

The nonofficer witness statements are not so straightforward. Aside from agreeing that it was dark, the four statements diverge dramatically – one witness couldn't tell whether there was a struggle before Rocha was shot, while another seems to have mistaken Rocha for Ulfeng, who fled the scene. A third could not see anything that happened on the passenger side of the SUV, where Rocha was killed. Pesina, who was walking near the intersection that night, said she couldn't see whether Rocha and Schroeder were involved in a struggle before the fatal shot was fired. "I saw [Rocha] on his hands and knees and I saw the female officer with her left hand trying to put him on the ground and she was kind of kneeling with her left hand and knee," she told police. "I don't know if the guy was fighting with the officer or resisting because I did not see that." Another witness, Sonya Lopez, was walking north along Pleasant Valley with her friend Tanya De Los Santos when the incident began. Although Lopez told police she didn't see a struggle with Rocha before his death, her statement is apparently confused about other details. For example, she says that she saw someone flee from the scene – that would have to be Ulfeng – but that she also saw an officer "wrestling" with the same person, who she said was wearing a white shirt – which is what Rocha was wearing. Similarly, De Los Santos says the "teenager" who ran away was the same person that police "put down" and shot without struggle. In his own statement to police, Ulfeng, who was later picked up by police, confirmed that he went to the Bitter Creek house that night to sell marijuana (although the woman says Ulfeng sold her two rocks of crack) and says that he ran when the SUV was stopped, hopped two fences and climbed onto the roof of a nearby house.

In the end, it appears that the grand jury was persuaded by the police version of events and, perhaps, portions of the witness statements, which, despite the confusion, tend to support the basic story proffered by police. Nonetheless, news of the no-bill was not universally well received. "We are very disgusted by the ruling, but we are not surprised," Susanna Almanza, director of People Organized in Defense of Earth and Her Resources, told reporters during a protest outside the courthouse. "[P]eople of color being shot or murdered don't get the same color of justice that other people do."

Since the no-bill, the case has moved on to APD's Internal Affairs Unit, whose investigators will conduct an administrative inquiry to determine if any department policies were broken during the fatal incident. At this stage, the officers' statements may in fact lead to some punishment. Notably absent from any of the officers' statements is any mention of turning on their in-car video cameras, which is required by policy and which might have helped record what happened.

Meanwhile, Taylor says that Daniela Rocha plans to take legal action. He declined to elaborate, though it seems likely Rocha will file a civil rights claim, a wrongful death action, or both. "It's just one step at a time," he said.