Invasion of the McMansions

Tarrytown neighbors outraged over demolition of house they considered historic 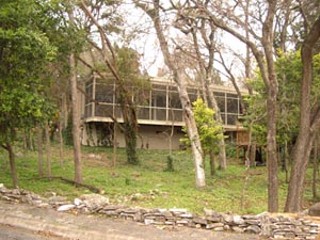 The destruction of this Tarrytown home has outraged neighbors. (Photo By Cheryl Middleman)

On the morning of July 26, five Tarrytown neighbors watched in disgust as the hulking arm of a bulldozer lurched toward the 1950s contemporary house at 3714 Meredith. They pleaded with the demolition crew and made frantic calls to the city's historic preservation department and police. One bystander even offered to write a check on the spot for nearly $100,000 over the sale price of the home. But the modern-styled house, recipient of a 1953 Texas Association of Architects design award and one of very few remaining homes designed by Austin architectural firm Fehr and Granger, was flattened within minutes. It was the sixth recent demolition on the block. Soon, a new, much larger, and more expensive home will occupy the property.

What happened on Meredith Street is happening all across inner Austin. The staggering pace at which Tarrytown's historic homes are being leveled and replaced with new, upscale houses is relatively atypical of Austin, however, and residents are irked.

At a recent West Austin Neighborhood Group meeting, Darian Stefani, who lives next door to the demolished Meredith Street house, told of how her friend and neighbor, Kyla Kanz, sold her beloved home to a man she thought was an individual buyer working on behalf of his home-seeking brother. By the time Kanz learned that the man was developer and home-builder Hunter Wheeler and learned his intentions, she had already cut a deal.

"He intimated that his brother's family would be living there," said Stefani, calling the deal "stealth maneuvering" and noting that Wheeler removed the 1953 award plaque the night before the demolition. Later, Kanz said Wheeler told her at the home's closing that they were "deciding what to do with it," and that he implied remodeling. Stefani also claims the home's building permit switched to a demolition permit on the city Web site the day crews arrived. She said Austin Historic Preservation Officer Steve Sadowsky "promised me that if a demolition permit reached his desk, that it would go before the national landmark commission." 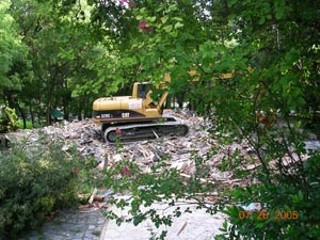 Wheeler's wife, Lisa, didn't speak to what was said between her family and Kanz, but as far as what neighbors believed, she told the Chronicle, "I had never met the neighbors before that horrible day when they all came outside upset over our demolishing [the home]." She said the home was "reviewed by the historical board and was given a demolition permit one month [prior to demolition]. We went through the proper channels. … We're not the kind of people who tear down big, beautiful houses and put up other ones just to make a profit. We're trying to preserve the integrity of the neighborhood. … We're extremely diligent as home-builders, we follow all the rules." Subsequent phone calls to the Wheelers were not returned.

Sadowsky said his office approves more than 400 demolition permits a year, and that the Meredith house was "fairly highly modified" and wasn't the same house that won the 1953 design award. A large part of the criteria for preservation is whether a home has "maintained sufficient integrity of materials and design so that it conveys its historical appearance," he said. He said he called a meeting with Wheeler on July 26, but that the house had been razed by the time Wheeler reached his office.

Tarrytown resident Sylvia Benini was also at the recent neighborhood association meeting. Her elderly neighbors, Kermit and Jewel Fox, had just signed a sales contract with Hunter Wheeler for their historic home at 2809 Townes Ln. According to their son, Kermit Fox Jr., Wheeler's "real estate agent told our agent that [Wheeler's] wife was seven and a half months pregnant and that they needed to move in right away." The day after the contract was inked, however, a demolition crew was at the house preparing an estimate, said Benini at the neighborhood meeting.

Fox Jr. said his family was ultimately able to get out of the contract, but before the contract's cancelation, Lisa Wheeler, speaking on behalf of Hunter as well as Hunter Wheeler Homes LLC, said they had never decided what to do with the house. She confirmed she is about to give birth and that the family plans to move into Tarrytown, just not into the Fox home. Hunter Wheeler Homes has four new houses completed or under way in the neighborhood, not including the Meredith one, averaging between 3,000 and 3,500 square feet and priced from $600,000 to $800,000.

"I love what we do," Lisa Wheeler said. "It's awesome because there's so much sprawl outside Austin and so many people want to live close to the city, but there's not a whole lot of homes big enough for young families like us with two to three kids."

West Austin Neighborhood Group Zoning Chair Blake Tollett remembers when land values in the area began to exceed actual home values in 2001 and 2002. Since then, the wave of developer speculation-driven scrapes and rebuilds of both "faux chateaus" and upscale condos has caused tax burdens to skyrocket. "If the old structure is taken down, the tax value becomes the full 100% current dollar value on the new structure," versus the moderate tax increases on original homes, capped at 10% per year, Tollett explained. At the same time, droves of comparatively cheap, new houses in Round Rock, Buda, and other suburbs are attracting middle-income buyers, some of whom might be able to afford an old Tarrytown house, but not a "McMansion," as some residents have dubbed the new luxury homes sprouting up.

Susan Pascoe, president of the Austin Neighborhoods Council, said, "Change in the current development/redevelopment process will take an attitude shift in city management and [a] council that places citizens' concerns above concerns about tax base and density." Referring to McMansions' high price tags, as well as their tendency to disrupt the scale and character of established neighborhoods, Tollett said, "The tools to limit this kind of noncompatible housing are out there, but no one's come forth to provide them."