The city eagerly raises the corporate incentive flag, and we're all expected to salute

By now most Chronicle readers have certainly had a chance to read and review the proposed "Economic Development Agreement" between the city of Austin and Samsung Austin Semiconductor, L.L.C. (most recent available draft dated Aug. 10), to meet with their neighbors and neighborhood associations and discuss the proposal, and to attend the public hearings around town scheduled to address the pros and cons of the deal. No doubt you're all ready to skip work and attend the City Council meeting this morning (Thursday) in order to hear your elected representatives finally discuss the potential merits of committing $58.5 million in a 20-year incentive package to the Korea-based corporation in return for its agreement to invest $2.5 billion to $3.5 billion in a (300-millimeter, OK!) chip-manufacturing plant over the next 10 to 20 years. After that, we can all consult with the Travis Co. Commissioners Court, the governor's office, area school districts, and a whole stream of other public officials just waiting for our democratic input before they determine how deeply they should bow while throwing money (perhaps $200 million in all) at the corporate decision-makers in Seoul.

What? You say you've missed all those public notices and meetings? And you don't remember being asked for your citizen's two cents before the city signs on the dotted line? Maybe that's because, in fact, nobody has asked you – there haven't been any public meetings and discussions of this unprecedented financial commitment, and negotiations between city staff and the company have proceeded in secret for several months prior to the abrupt recent announcement that the package is ready for delivery, as an unassuming "consent" item (No. 8) on this morning's agenda.

Presumably, the council will at least acknowledge that a public giveaway of this size requires a bit of rhetorical lip service before official genuflection. But to judge from the deferential public statements leading up to the ceremony, it's unlikely the members will do more than compete to sing Imperial Samsung's praises and to second the motion that city staff begin drafting the tax rebate checks, posthaste.

It's of course arguable that the potential financial return to the city merits the long-term commitment of city resources – 10 years of 100% real and personal property tax rebate, potentially 10 more years of 75% rebate, more than $10 million in infrastructure fee waivers, etc. – that promises 500 new high tech positions, 200 contract employees (i.e., tech migrants), and possibly many more lower-level indirect jobs, albeit in a manufacturing facility that even its rabid supporters acknowledge is likely to have only about 10 years of useful life. But wouldn't it be nice actually to be allowed the debate over this unprecedented public investment, only the most recent and largest in a long string of "economic development" projects still most visibly symbolized by the hulking Intel skeleton looming over Fifth Street, not to mention the underused CSC complex literally surrounding City Hall?

And where is it written that the future economic vitality of Central Texas should be determined by a private tyranny headquartered 5,000 miles away, holding a competition in which the rules are fixed and the victory goes to the community most willing to mortgage its financial future, its democratic principles, and its workers to the whims of unknown and unaccountable corporate bosses?

Samsung's corporate Seoul men have not actually committed to building the plant in Austin – and in fact announced this week that they plan to make China their new "global research and development center," so we shouldn't be counting any Korean chickens – but Austin officials have been told by local management that they insist on having "agreements in place" before they choose between Austin, China, Germany, and perhaps the dark side of the moon. In this global race to the bottom constructed by international capital, that puts the cart firmly in front of the horse – people and communities are in abject service to the corporate economy and the financial priorities of its unelected masters, and never the other way around.

And in other news this week, according to the Korean Times, the Samsung Group of companies is under investigation for alleged bribery of government officials and ostensibly competing presidential candidates.

Also this week, the state Legislature failed to devise an adequate, constitutionally required public school finance plan – largely because the legislators' corporate sponsors refuse to pay their fair share of the expense. They did, however, amid much grandiose rhetoric, manage to enact a bill barring the government from using its eminent domain powers for purposes of economic development – stopping long enough to carve out a crucial exception for Jerry Jones' Dallas Cowboys, who are in the process of planning a state-sponsored football palace in Arlington, where corporate box-owners can continue to enjoy their largely tax-exempted entertainment at public expense. No doubt somebody reminded them that the Texas Rangers had received a similar beneficence in Arlington some time ago, riding roughshod over local property owners, and thereby underwriting the personal fortune of our current, independently "entrepreneurial" president.

It's all very heartwarming.

So by all means, give away the public store to Samsung, don't examine the numbers too rigorously, don't inquire too closely into the company's international political intrigue, and certainly don't subject these Global Titans of Industry to any of the messier details of representative government and participatory democracy. Since we're competing with China, for god's sake, maybe we can outlaw unions and political dissent and the minimum wage while we're at it – they'll really like us then.

But if and when the deal is done, and the handshakes-and-Champagne ceremonies commence, kindly spare us the Oppel-ian editorializing and speechifying about "free trade" and "the free market" and "entrepreneurial independence" and all the other sanctimonious bilge about protecting the little guys from the overbearing hand of Big Government. It's all a pack of condescending lies, and we're tired of being expected to sing in the chorus.

Welcome to Samsung's Eminent Domain. You too can be a happy sharecropper on the corporate plantation. 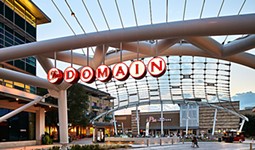 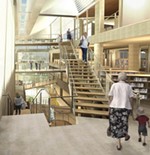 Council: What's Your Incentive?
HID Global is getting some economic incentives, but expect the policy on that to change soon