All Aboard for the Death Penalty Express 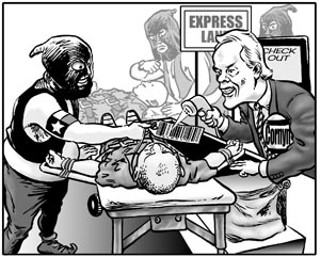 If a contingent of congressional Republicans have their way, federal law governing all criminal appeals will be gutted – opening up an express lane to the Texas death chamber and making it inevitable that an innocent person will be executed. The proposed legislation, the Streamlined Procedures Act of 2005 (HR 3035 and S 1088), would eliminate federal court jurisdiction over the vast majority of habeas corpus appeals – through which defendants challenge the constitutionality of their convictions, a process that is at the heart of the growing number of exonerations nationwide – leaving state courts of appeal as the final arbiters of justice.

In Texas, the proposed legislation would leave decisions of life or death in the hands of the Court of Criminal Appeals – a court whose death penalty rulings have come under attack not only by reformers and advocates but also by the U.S. Supreme Court. If the draconian legislation becomes law, "it would end federal habeas corpus in Texas," says Jim Marcus, executive director of the nonprofit Texas Defender Service.

At issue are congressional limits on criminal appeals to the federal courts – where, for example, questions of ineffective counsel and claims of prosecutorial misconduct are adjudicated, and, more often than not, lay the groundwork for claims of innocence, new evidence testing, or the granting of a new trial. The rules governing the process were last modified nearly a decade ago with the passage of the Antiterrorism and Effective Death Penalty Act of 1996 – a notoriously complex scheme of statutory hoops through which inmates and their attorneys must jump in order to have their cases heard in federal court. The complexity of the process – which can toss a case back and forth between federal and state courts – is often lengthy, a circumstance that, ostensibly, prompted Sen. Jon Kyl, R-Arizona, to introduce the SPA in the Senate this spring. "Many federal habeas corpus cases require 10, 15, or even 20 years to complete," he told colleagues on May 19. "These delays burden the courts and deny justice to defendants with meritorious claims. They are also deeply unfair to victims of serious, violent crime." Although the AEDPA (passed by a Republican-controlled Congress) itself curtailed federal judicial oversight in order to speed the process along, its restrictions are apparently not enough for Kyl, his co-sponsors (first among them Texas Sen. John Cornyn), and his House colleague Rep. Dan Lungren, R-Calif. (author of companion bill HR 3035), who have seemingly decided the remedy to this sort of delayed justice is to eliminate the judicial process altogether.

Under the SPA, the only criminal cases that would earn any federal habeas review are those in which a defendant can show three things: one, that there are "new facts" in the case that were never brought to light through the "due diligence" of attorneys; two, that those facts establish the defendant's innocence by "clear and convincing evidence"; and, three, that "but for a constitutional violation, the defendant wouldn't have been convicted," Marcus says. "You should really think of it as three bells that all have to be rung." The problem, say Marcus and others, is it is nearly impossible to ring all three bells without first successfully ringing an underlying chord – such as a claim that the reason the new information was unidentified was the result of a prosecutor hiding evidence from the defense (as was the case with Texas death row inmate Delma Banks, whose case was ultimately remanded to state district court), or because the defendant's attorney was ineffective. Under the SPA, those claims would need vetting in state court – in Texas that means the CCA, a court whose record on such issues is abominable. It was the CCA that infamously opined in Calvin Burdine's death case that Burdine's lawyer sleeping intermittently through his trial did not necessarily mean his counsel was ineffective. (During a Senate Judiciary Committee meeting late last month, Cornyn told members that he believes the law "provides for a lawyer who is awake and fully functioning," and said the fact that Burdine's case was reversed shows "that the system can and does work." But if those kinds of claims aren't raised during state appeals or in a direct appeal to federal courts, Cornyn argues, a defendant should not be able to raise a claim for the first time, years later, during federal habeas appeals.)

Neither Marcus nor fellow TDS attorney Greg Wiercioch can recall a single case won on the basis of "actual innocence" during a habeas appeal that was not predicated upon one of those apparently lesser claims. "If the state system is shoddy," says Wiercioch, under the SPA "you're never going to get an opportunity in federal court to get better counsel, or to investigate what may be a claim of actual innocence. Unless you can meet the really high standard ... they're screwed." The legislation's message, say the TDS attorneys, "is that if [the defendant is not 100%] innocent, we don't really care," Wiercioch said. Even defendants who have been exonerated by DNA would likely not get a federal review. Take the case of an inmate convicted before the advent of modern DNA technology. Although the defendant may be able to pass through the SPA's first two hurdles – new evidence, clear and convincing evidence of innocence – any attorney would be hard-pressed to find a constitutional claim that hinges on the right to access modern technology. As such, the defendant would likely be barred from proving "actual innocence" in court.

According to Cornyn, all the hype over the possibility of denying justice to criminal defendants is, apparently, just hysteria. "What we are talking about here is not denying people access to reasonable review of their case, but we're talking about abuse of the habeas process in federal court," he told the committee on July 28. The "fact is" that habeas review "has become rife with gamesmanship" and is used to delay the imposition of a fair sentence. "In my state, from the time ... the most hardened criminals are convicted of the most heinous crimes ... their case is reviewed by not only a jury of 12 of their peers but up to 23 different judges ... perhaps even more."

Just because a number of people have reviewed the case, however, doesn't mean it has been justly resolved, points out SPA opponent John Whitehead, president of the conservative civil liberties organization the Rutherford Institute. "State court judges – who are often elected – are susceptible to pressures that life-tenure federal judges may find less compelling," he wrote in a July 27 memo to the committee. The SPA is "radical legislation" that would "likely result in the execution of citizens who have been wrongly convicted and sentenced to death." Whitehead isn't the only conservative critic of the legislation. The ranks of opposition are swollen with critics of all political stripes – including former Rep. Bob Barr, R-Georgia, the National Association of Criminal Defense Lawyers, former FBI director William Sessions, and the American Bar Association. This widespread criticism has apparently halted the SPA's progress. Sen. Arlen Specter, R-Penn., chair of the judiciary committee, recently tabled the measure until some time next month. If it passes, the measure will likely be challenged in court – at least in part on questions of whether Congress actually has the power to encroach on the jurisdiction of the judicial branch. "It is a constitutional issue, taking so much power away from the courts," Wiercioch says.