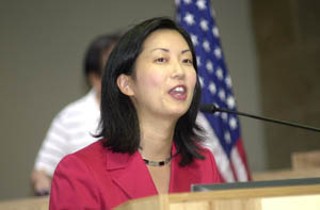 At the end of last Thursday's City Council meeting squatted Item 8, setting public hearings for the proposed property tax rate. New "truth in taxation" laws require public hearings any time there is a proposed tax increase, which please few but the grandstanding legislators who pen the proposals and the libertarian cranks the meetings bring out of the "small gummint" woodwork. In theory, the public input is commendable, but when it's budget time at City Hall the cart rides before the horse – for while only bits and pieces of the actual proposed budget have been reviewed, the law sets strict timetables for public input on the property tax rate – never mind that the tax rate hasn't been selected yet.

So to most on the council, Item 8 probably seemed a largely perfunctory measure, wherein the highest of three bandied-about tax rates would be set as the maximum rate, but (probably not) adopted. The late hour at which the vote occurred (around 11pm) also held little indication of controversy. So when Jennifer Kim proposed setting the maximum allowable property tax rate at the lowest of three proposed rates, she triggered a public dust-up on a council that prides itself (at least in public) on collegeality and discretion.

Kim initially urged adopting the "effective" rate (designed to bring in the same amount of money as the previous year) of 43.2 cents, as the proposed maximum. That's below both the "nominal" rate (44.3 cents, same as last year but collecting more money due to rising property values and development), and a compromise rate proposed earlier by City Manager Toby Futrell – 43.95 cents, which skews toward the nominal.

In a budget season focused on add-backs to services slashed during the city's slump, Kim's preemptive strike was not well received by her colleagues. Betty Dunkerley, in what seemed the prevailing sentiment, said Kim's motion provided no "wiggle room" for the 2005-06 budget. Briefings earlier that day echoed the majority's concerns – presentations from the departments of Parks and Recreation, Health and Human Services, Housing, and libraries all described the deleterious impact of cuts to their departments. Add-backs to the four departments total $2.6 million – which Kim insists is available without raising taxes. "I want to make it clear, if we stay at the effective tax rate, we will still be able to have the add-backs," Kim told me later.

Kim argues that by being "very aggressive in going for … grants and federal dollars" the city can restore the services to their precuts level as necessary. "It's up to our council to work hard, to look at all our departments, all our add-backs," she said, calling the living wage increase for city employees and restoration of social service contracts her main concerns. "We are just seeing a recovery in our economy," Kim cautioned, noting property taxes "overburden small homeowners," and "push people as well as businesses out of Austin," creating tax revenue loss.

Thursday night, Kim backed down from her initial proposal and tried to split the baby by moving to set the maximum rate at Futrell's proposed 43.95 cents. Describing it afterward as "one of the most strongly worded battles on the council in the two years I've been there," Brewster McCracken, said Thursday's skirmish "portends we're going to be locked in a serious budget fight." Raising the rhetorical ante, McCracken said he saw two mindsets that night: the majority's concern for the "social fabric of the community" versus the "same approach to governance that the Bush administration and the Perry administration have" to "bleed the beast" of government.

Ultimately, Kim's proposal was defeated as council voted 5-2 to adopt the current (nominal) rate as the maximum, with Kim joined only by Mayor Will Wynn. Wynn said he wanted to start low and work his way up, not the other way around – but just how that could be done under the new taxation laws remained unclear.

Council has time to cool down this week, as members don't meet until Aug. 18, when Wynn presents his plan to relocate the Green Water Plant (see "In Green Water, Mayor Finds His Signature Cause"), and the budget presentations (and battles) continue.