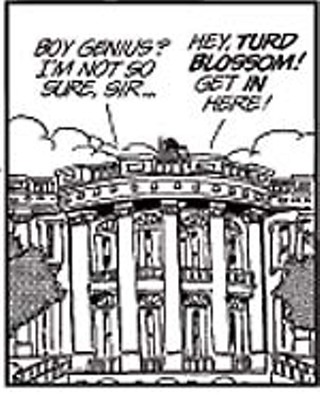 Hoping to pick Austin's moral fiber out of the dung heap, Austin American-Statesman editors last week pulled two Doonesbury strips from the comics page, pushing the boundaries of modern doo-doo editorial theory. In both strips, Doonesbury creator Garry Trudeau portrayed the president of the United States using his beloved nickname for top aide Karl Rove, who from now until eternity will be known as "Turd Blossom." Of the 1,400 papers that carry Doonesbury, the Statesman was one of only about a dozen that pulled the strips, judging Trudeau had gone a turd too far.

In his online blog, Statesman managing editor Fred Zipp, clearly tired of all the crap in newspapers, proclaimed the word turd a "profanity." Such words are a "hot-button issue for many of our readers, so we generally avoid [them]," Zipp wrote in his blog, renowned for its fiery prose and snappy sentence structure. But first, Zipp said, he consulted with humor columnist John Kelso and assistant managing editor Debbie Hiott, who assured him, without a doubt, that that kind of shit would never make it into the paper. No turd will ever soil the pages of the Statesman, Zipp declared.

Soon after, the shit hit the fan. A quick search of archives discovered all sorts of crap in Statesman stories. Not only do turds defile the articles of a dozen writers in recent years, mounds of the Statesman's poop, crap, and general vile splat are piled up in LexisNexis. A reference to Mexicans as "dog turds" in 2003 made it through the Statesman's careful shit-screening process. And who could forget the widespread looting in 1995, after Michael Barnes quoted Tom Wolfe's reference to sculptures outside office buildings as "turds in the plaza."

The day after Zipp's online declaration, Kelso was shocked to find himself in the middle of Turdgate. Confronted with data that showed he had, in fact, dropped the "t-word" in a column several years back, Kelso was unusually speechless. In fact, by some columnists' standards, Kelso is a little light in the turd usage, but he's a virtual "poop" machine, cranking out two poops in the last month alone, including a gratuitous "poop" inserted into a quote, in parentheses, in his column last Tuesday, the same day Statesman editors were mulling over Trudeau's turd.

"I guess my column is completely full of shit lately," Kelso told the Chronicle, using the type of humor scorned by polite society.

Asked to explain the subtle differences between a turd and a poop, Kelso, in essence, said he wasn't sure, but he would know it if he stepped in it. But he appeared to have a firm grasp of the current Statesman excrement style guide: Turd is bad. Poop is OK. Crap is not so good, unless it's in a quote. Then a writer can crap all he wants. Cow pie? Part of nature. Dung? Animals do it. Ka-ka? No no.

"Different editors have different hang-ups," Kelso said. One editor steadfastly cut out anything in his columns that made fun of cats, said Kelso, who recently used the line, "It's not the size of the dog in the fight, it's the size of the poop in the dog." Zipp's online statement declaring turd a "hot-button issue" prompted a shitstorm of response from readers – many, many responses, more than a few, a crapload – mostly expressing a collective "You're shittin' me." Some of the initial responses clogging the Statesman's Web servers wondered why "mofo," when uttered by the Governor, is apparently okeydokey for a page one headline, while a president's "turd" is inflammatory in a cartoon. One reader, Manuel Z., awash with conflict over usage of "poo" and "crap," demanded the Statesman let readers know "where the thin brown line lies."

"I asked, you answered and the results are unanimous, so far: Readers say I blew it," wrote Zipp, who perhaps was expecting some sort of wave of support from Austin's righteous turd-haters. But Zipp said he was only doing his duty. "Though the critics find the word 'turd' acceptable, I disagree," he snappily retorted, although he declined to elaborate on his detailed examination of the turd issue.

Zipp, trying to show he gets all that "savage" Doonesbury humor, concluded the subject of the cartoon was "that Karl Rove is puppetmaster to George Bush's Howdy Doody," which he decided has been "amply aired out in the paper." (Well, maybe not in the Statesman, but some papers have aired it out, so there won't be any more of that icky Rove "puppetmaster" talk here.)

Of course, beyond Zipp's sociopolitical analysis, the real point of the strip might have been to note that the Leader of the Free World has a potty mouth. Or at least that is the conclusion drawn from the Statesman's shit standard, which has labeled the president's words too wicked for print, even though it could be argued that any words uttered by the president in the Oval Office are part of history. Maybe "Turd Blossom" is an important legacy for archivists, who might find echoes of Ronald Reagan's own poop musings.

"If Bush himself walked out to the Rose Garden and hailed his pal Turd Blossom, the nickname would appear in the paper," Zipp assured readers, without explaining why the nickname has appeared in dozens of important newspapers and magazines, but not the Statesman.

When contacted by the Chronicle, Zipp declined to comment further, which leaves several questions unanswered, including the inside poop on why he chose to announce his Turd Manifesto online instead of in the newspaper, where Doonesbury actually appears. Nor was he willing to offer any insight into why it's okeydokey to run the offensive cartoons on the Web site, where they might be found by impressionable underage readers surfing for turd jokes; or why a poop is better than turd – an issue that has racked professional journalists for ages.

Meanwhile, in the wake of the Statesman's decision to dump on Doonesbury, speculation mounts that the paper will soon announce a new slogan, "The Statesman: Only the crap we see fit to print."