Monkeys, schmonkeys – a museum in Glen Rose argues against Darwinism 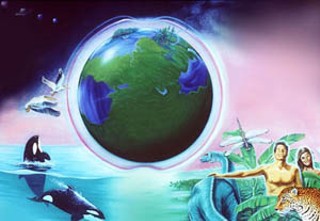 A painting in the creationism museum depicts Adam petting a dinosaur.

The monkey's no kin to me (yeah, yeah, yeah)

I don't know much about his ancestors

But mine didn't swing from a tree."

Situated 55 miles southwest of Fort Worth where the Hill Country gradually gives way to the prairie, the picturesque town of Glen Rose has long been a favorite getaway for tired city dwellers. In the early 1900s, the area was known for its mineral springs and their alleged healing powers. More recently, the numerous dinosaur tracks in the limestone streambed of the Paluxy River have become Glen Rose's prime tourist draw.

The Cretaceous era tracks found in nearby Dinosaur Valley State Park are about 113 million years old. The Acrocanthaosaurus, the Pleruocoelus, and another not-yet-identified variety of dinosaur probably made these prints. While some of the tracks were sent to New York's American Museum of Natural History and our own Texas Memorial Museum, excavation work is ongoing.

Dinosaur Valley also features giant models of a Brontosaurus and a T. rex built for the Sinclair Oil Company's exhibit at the 1964 New York World's Fair. These models have nothing to do with the dinosaurs that once roamed the area, and the Brontosaurus (an Apatosaurus mistakenly fitted with a Camarasaurus head) never existed at all, but they're kept on hand as kitschy evidence of our evolved understanding of the prehistoric past.

As you leave the park, a handmade wooden billboard reading "See the Evidence" beckons your attention. A closer look reveals a dinosaur track with a human footprint in the middle of it. This is the Creation Evidence Museum, a small but tenacious fly in the ointment of empirical science that casts pebbles at Darwinian evolution, the fossil record, and astrophysics in an effort to advance the biblical story of creation as fact.

Founded in 1984 by Carl Baugh, an archaeologist and Trinity Broadcasting Network personality with oft-questioned credentials from unaccredited institutions you've never heard of, the Creation Evidence Museum exists at the far end of the creationist spectrum. Unlike "Intelligent Design" creationists, who accept varying degrees of the scientific record while ultimately attributing the complexity of existence to a supreme being, Baugh is a "Young Earth" creationist, who strictly adheres to belief in a seven-day creation that occurred only 6,000 years ago.

The museum is housed in a temporary trailer, but a permanent facility next door is slowly but surely being built. The trailer was jam-packed with a standing room only crowd on a recent Saturday afternoon. Various exhibits were placed around the trailer's periphery with little regard for logical flow, while most of trailer was filled with chairs where people sat and watched Baugh's videotaped lecture on "Creation in Symphony."

Because of its proximity to Dinosaur Valley State Park, the assertion that man and dinosaur existed contemporaneously is key to marketing the museum. A painting on the wall depicts children playing in the Paluxy River while a friendly baby dinosaur frolics nearby like the family dog. In another painting depicting day six of creation, Adam and Eve are shown smiling in the Garden of Eden. The chiseled Adam, who resembles a young Ronald Reagan here, reaches out his muscular arm to pet a dinosaur.

For almost as long as dinosaur prints have been identified in Glen Rose, there have been people claiming that human footprints appear alongside the dinosaur prints in the Paluxy streambed. The most celebrated of these impressions – the "Taylor Trail" – was ultimately determined to be prints of dinosaurs walking in a manner that favored the back of the foot. While even most creationist organizations now reject the "Paluxy Man-Tracks" as evidence favoring their cause, Baugh's fealty to them remains unabated.

The museum really becomes mind-blowing with its explanation of how biblical principals like Methuselah and Noah could have lived for hundreds of years. Baugh contends that prior to the Great Flood, a stronger magnetic field, increased oxygen levels, and a protective, magenta-hued "firmamental canopy" of crystallized metallic hydrogen surrounding the earth promoted longer lives and larger physical sizes. One of the museum's research projects is a "hyperbaric biosphere" with magenta windows designed to serve as a simulacrum of the earth's preflood atmosphere. Baugh claims to have extended the lifespans of fruit flies three-fold and detoxified copperheads in it. A much larger biosphere is under construction in the new building.

Baugh uses that old Memorex commercial where Ella Fitzgerald's singing shatters a wine glass as an analogy to explain how God made the earth tremble at the time of the Flood: Gravity waves sent forth by God stretched the "space fabric" to a point where faraway stars exploded. The concept of divine space fabric stretching is also used to explain how a seven-day Creation Week on earth could've taken millions of years in deep space.

In what could almost be construed as a tacit acknowledgment of the museum's inability to debunk evolution with actual evidence, Baugh ends with a moral argument for creationism. Evolution, he says, offers no explanation for our individual existences, and therefore it can only end in despair. By contrast, belief in the creationist model imbues our lives with a purpose that apparently can't be found anyplace else. In other words, all other things being equal, it's better to believe in creationism because it has a happier ending.

The average curiosity-seeker can't be expected to follow every quick right turn in the museum's bob-and-weave approach to explaining the origins of the universe, but that's what you're left with when you start with irrefutable belief and work backward to try and prove it. Few are likely to leave the Creation Evidence Museum believing anything different than they did upon entering, but you'll definitely have something to talk about.

(The Creation Evidence Museum is located four miles west of Glen Rose on FM 205 just west of US 67. It's open 10am-4pm Tuesday-Saturday; $2 per person or $5 per immediate family. Visit www.creationevidence.org for more info.)