While the city keeps dogs and cats on a tight leash, monkeys, along with other wild pets, swing under animal control's radar 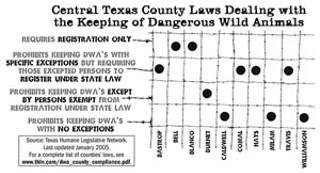 A local woman rang the Austin Zoo about a year and a half ago in search of some monkey advice. Her 11-month-old "pet" lemur kept biting people, including herself, she told director Cindy Carroccio. "He's nipping me and I'm hitting him on the head with a newspaper."

"Keep that up, sister," replied Carroccio, who has taken in dozens of primates from all over the country since her nonprofit wildlife center in southwest Travis County opened to the public in 1992. Yes, the comment was snippy, but Carroccio was all too familiar with the fact that there was only so much she could say to help. As the zoo's Web site notes, more than 90% of their animals are former pets or rescue cases.

Carroccio gave her caller the general pet monkey spiel, which goes something like this: No matter how docile a dependent infant ape or monkey might act toward their caretaker, when they reach sexual maturity, typically between four to six years of age, they start battling the humans around them for dominance, just as primates do amongst themselves in the wild. Not surprisingly, such behavior entails biting and scratching (serious health risks for humans since monkeys are notorious for carrying tuberculosis, hepatitis, and herpes). As Wally Swett, director of the Primarily Primates sanctuary, put it, "No matter how they're treated, they will start to treat you like another monkey."

According to Carroccio, that's exactly what happened in this case. She has been told that the same lemur her caller was complaining about has bitten two people in the last three months. Although Travis Co. Health and Human Services says it hasn't received any complaints regarding a monkey, Carroccio said she's been hearing about the lemur, which apparently lives in the Capital Plaza area.

Given the lax state and local laws governing exotic animal ownership, it's no surprise that a lemur might be swinging under HHS's radar screen. Although Austin/Travis Co. requires owners to register their dogs and cats locally, exotic animals like monkeys don't have to go through a registration process, "so we wouldn't have any way of knowing how many iguanas, crocodiles, [or] monkeys are out there," said Dorinda Pulliam, shelter director for the Town Lake Animal Center and Austin/Travis County's assistant director for animal services. Dogs and cats occupy the vast majority of her department's time, said Pulliam, and loose pit bulls and other aggressive canines are a much more looming threat to the public than monkeys. She said she could only recall one primate-related complaint in the last five years, but added that, if someone were to call HHS about a monkey on the loose, the department would investigate the case just like it would the case of a domesticated animal, because the City of Austin's code says that animal control will investigate complaints on a case-by-case basis, not on a species-by-species basis. In other words, animal control won't discriminate against a marmoset monkey residing in Hyde Park, for example, just because the alleged Capital Plaza lemur is misbehaving.

Of course, the possession of all animals on the state's dangerous wild animals list has been prohibited locally by law post-2001, when the Legislature passed the Dangerous Wild Animal Act, aka Senate Bill 235. (Places that meet the state's definition of "sanctuary," like the Austin Zoo can be exempted from the rule at the local level.) Lawmakers, however, dropped monkeys at the last minute from the list, which includes apes – baboons, chimpanzees, gorillas, and orangutans – as a result of heavy lobbying from wild animal dealers and the hunting industry, said Swett, who was an advisor in the bill's crafting. Those involved in the exotic animal trade had a decent chunk of change to spend on lobbying, considering monkeys and apes alone sell for anywhere between $2,000 and $60,000 apiece, according to Swett.

SB 235 gave local governments one year to decide whether to ban all animals on its list or to allow registration of such animals. Texas' 254 counties eventually traveled one of four legal roads. The most common choice was to outlaw animals on the list with no exceptions. Some counties, however, went with prohibiting the possession of animals on the list, while at the same time requiring entities granted exemptions under SB 235, such as medical research facilities, college mascots, and zoos accredited with the American Zoo and Aquarium Association (AZA), to go through a local registration process. The difference between this legal option and the previous one is that the state-exempted entities don't have to mess with registration under the first option.

The most lax legal option counties have is to require registration only, which allows anyone to have any animal they want as long as they register it. A fourth legal route counties took was banning animals on the list, while at the same time allowing individuals or entities granted exemptions to the law locally – by a commissioners court, in other words – to possess such animals legally on the condition of local registration. Travis County went with this option, granting the Austin Zoo, not an accredited AZA zoo but considered a sanctuary by the county, a local exemption. (See chart below for information on Central Texas counties.)

State law defines "animal sanctuary" as "a nonprofit organization … that operates a place of refuge where abused, neglected, unwanted, impounded, abandoned, orphaned, or displaced wild animals are provided care for their lifetimes or released back to their natural habitats." Sanctuaries can't engage in "any activity that is not inherent to the animal's nature"; "use the animal for any type of entertainment or public exhibition"; "sell, trade, or barter the animal or the animal's body parts"; or "breed the animal."

This definition, of course, is wide open to interpretation, which helps leave the law open to loopholes. It's also nearly impossible for local governments, some of which are doing well just to consistently provide basic service, to stay on top of who owns what animal and whether places claiming to be sanctuaries are up to par. (The USDA pitches in with two inspectors for the entire state.)

Although the Austin zoo doesn't take apes, 40 monkeys call its enclosures home. The ones with digits or the tip of their tails missing are generally lab rescues, as lab monkey's extremities get caught regularly in their small cage openings. And the ones extending their arms out of their enclosures, wanting to make contact with caretakers and other observers, are typically former pets Carroccio has taken off people's hands – for a fee, that is. She wouldn't disclose how much she charges, but noted it's "a drop in the bucket for lifetime care," considering monkeys can live 40-plus years.

To learn more about the pitfalls of pet monkeys, see www.petmonkey.info.