Longtime public schools activist Carolyn Boyle speaks for a group of PTA moms who intend to become Texas political scene "players" through the formation of the Texas Parent PAC. Disgusted by the Legislature's inability to pass school finance reform, the bipartisan group intends to raise $250,000 to recruit and support candidates, both Democrat and Republican, who "put children first." At the group's press conference, which featured home-baked cookies, Boyle admitted that learning the political ropes would be a challenge. "If you're interested in putting on a carnival to raise money for a school, we can tell you all about that," she said. Still, she believed a "sleeping giant" of angry parents will respond to the group's call to clean house in the Lege. Such parents – or anyone interested in running for office as a public schools crusader – can find more information at www.txparentpac.com. – Rachel Proctor May (Photo By Jana Birchum)

• New names for vacant seats at the Legislature are coming out of the woodwork like termites. Departing Austin Rep. Terry "Temper Tantrum" Keel's seat is being sought by Republican Dick Reynolds, former Texas Workers' Compensation Commission chair. Reynolds has formerly represented Richardson, North Dallas, and Garland during two terms in the Lege, but, according to Quorum Report, has been an Austin resident since the 1990s. Other names being floated are Austin attorneys Hugh Brady, Duffy Keever, and former City Council candidate Gregg Knaupe. Keel himself is running for a spot on the Texas Court of Criminal Appeals. Meanwhile, in H-Town, used car dealer Patricia Harless has announced her intention to run for retiring Republican Jon Lindsay's Houston Senate seat. Harris County representatives Dwayne Bohac, Peggy Hamric, Joe Nixon, and Corbin Van Arsdale are also thought to be eyeing the opportunity. Harless is Patron Chair of the Texas Federation of Republican Women. – Wells Dunbar 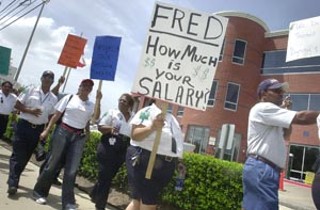 On Monday, Capital Metro employees demonstrated outside a board of directors meeting, while Aug. 5 looms as a possible start date for a strike by the workers of the city's mass transit authority. The 850-plus person union voted overwhelmingly July 20 to authorize a strike if the union and Capital Metro cannot resolve a salary and health care disagreement. Capital Metro bus drivers and mechanics, members of Amalgamated Transit Union Local 1091, are protesting a decreased starting salary for new hires and proposed health care cuts. The union members are also urging Capital Metro administrator StarTran to create benefits for retirees. Capital Metro says some 130,000 riders could be affected by the strike, which would result not in a complete halt, but a vastly diminished version of service. UT shuttle bus service, with its drivers working for a separate company, would not be affected. Both the union and StarTran say they are working to avert the possible strike. – Wells Dunbar (Photo By John Anderson)

• Labor isn't exactly a burning issue with Gov. Rick Perry, but he nevertheless secured an endorsement this week from the Texas State Association of Fire Fighters, which represents some 13,000 fire fighters across the state. Perry is running for re-election and faces state Comptroller Carole Keeton Strayhorn in the 2006 GOP primary. In a statement, association president Guy Turner cited Perry's support of public safety issues in the regular legislative session. He said the endorsement of Perry was "an easy choice" for the group. Still, the decision to endorse Perry wasn't "a no-brainer decision," said Austin Association of Professional Firefighters President Mike Martinez, who was on the TSAFF committee that handled the endorsement resolution. Firefighters working in Emergency Services Districts – like those that handle fire-fighting duties in Travis County's various ESDs – weren't that excited about the Perry endorsement because Perry vetoed a bill that would've given ESD employees certain civil service labor rights currently enjoyed by municipal fire-fighters. The decision to endorse "didn't come without debate," Martinez said, "it was a big step out of the box for a labor union to endorse a Republican candidate who is not very labor friendly." Considering the successes firefighters have had with Perry, however, the endorsement was "overall the best decision for right now," he said. – Amy Smith and Jordan Smith

• "No Nonsense in November" is the unifying theme of a new political action committee and statewide campaign to defeat a November ballot item that seeks a constitutional ban on gay marriages and civil unions. Campaign director Glen Maxey reminds us that we're only 15 weeks away from the Nov. 8 election and there's lots of work to be done before voters head to the polls. The group has launched a new Web site – NoNonsenseInNovember.com – where folks can catch the latest news, pledge to vote against the measure, donate a load of money, and volunteer their services. Since this is a ballot measure, Maxey says, the PAC can accept campaign contributions from just about anybody. – A.S.

• For whatever it's worth, the House on Monday approved a bill that would give the state's judiciary a pay raise and boost legislators' pensions at the same time. If recent history is any indication, however, there's no guarantee that the bill will actually reach the governor's desk. This marks the third time the House has voted on the $33.8 million package. The difference this time is that lawmakers stuck their necks out with a record vote of 105-26. Previous votes have gone unrecorded – presumably because legislators were skittish about folks knowing that they were voting to pad their pensions. Local delegates voting "no" on the bill included Dawnna Dukes, D-Austin; Todd Baxter, R-Austin; and Patrick Rose, D-Dripping Springs. Casting "yes" votes were Austin Democrats Elliott Naishtat, Eddie Rodriguez, and Mark Strama, as well as Williamson Co. Republicans Mike Krusee and Dan Gattis. Austin Republican Terry Keel, a candidate for the state Court of Criminal Appeals, was recorded as present but not voting. – A.S.

• Public interest action groups TexPIRG, Consumers Union, and the almighty AARP flanked Rep. Harold Dutton, D-Houston, this week in opposition to proposed telecommunications deregulation at work in the House and Senate. Legislation from Republicans Sen. Troy Fraser and Rep. Phil King would unbridle massive telecom providers SBC and Verizon from the same regulations fostered upon cable companies as they roll out their own Internet cable service. In doing so, funds formerly directed toward local communities would land in a catch-all state agency. The bills also allow for telephone rate increases in several markets. Similar legislation from Fraser passed both chambers during the first special session, but died as lawmakers butted heads over school finance and property taxes. "This is the fourth time in 2005 SBC has gotten this bill presented in the Legislature," said Dutton in a press release. "HB 13 is just as bad as its predecessors. … Once again, SBC puts its hand deeper into Texans' pockets, all in the name of competition. … This is the largest giveaway to any one company in Texas' history. HB-13 is really SBC-13." – W.D.