The blog days of summer

Tweet
print
write a letter
Blog! If blog weren't the single most overused term blogging through the blogosphere, we'd love to blog it. Television and print news, facing declining viewership, readership, revenue, and ratings, have tried to both sink and tether themselves to the new information medium, running features maligning the weblog as a shadowy consortium of partisan hacks exempt from campaign finance laws, then trumpeting it as the high tech evolution of a free press. Often lost in the noise, however, are the sites themselves. The following are several excellent left-leaning blogs proud to call the Capital City home.

Founded by UT Democrats, Burnt Orange Report (www.burntorangereport.com) is the biggest of the Central Texas lefty weblogs, linked to by heavy hitters like DailyKos.com. Largely covering state and municipal politics, BOR also lends local perspective to bigger-picture issues. Although sometimes victim to the common inclination to ubiquitously mention events covered elsewhere in more depth, like national and world news, the professionalism with which BOR conducts itself is a rarity. A thoroughly comprehensive set of links, not only to like-minded bloggers, but to a gaggle of news sources and Republican adversaries as well, rounds out the site.

Catty, chatty, and occasionally trashy, PinkDome (www.pinkdome.com) focuses its gaze on the Capitol as its three authors vitriolically deconstruct state politics. Linking to video of the televised tête-à-tête between the Governor and Bill O'Reilly, wherein the FOX pundit charged Texas as easy on child molesters, Dome scribe Rawhide waxes, "Rick Perry & Bill O'Reilly debating is like watching a monkey fuck a football." Its caustic hilarity sheltered in anonymity, PinkDome also passes along gossipy rumors and juicy quotes, as well as hosts a lively comments section.

Registering slightly smaller readings on the snark meter is In the Pink Texas (www.inthepinktexas.com), an informative and humorous site from journalist Eileen Smith. A former House Appropriations Committee analyst, Smith has seemingly witnessed enough backroom wrangling to have a good grasp of how it's done under the dome. Although posting has been lighter over the summer, ITPT is still a valuable and funny read. Responding to a Perry radio ad that claimed, "It's time to act on the 3 Rs … results, resources, and reform for Texas schools," Smith says, "there's only one R that Perry's worried about. Re-election. And any male hair products beginning with R."

Written by Scott Henson, Grits for Breakfast (www.gritsforbreakfast.blogspot.com) "looks at the Texas criminal justice system and related civil liberties topics, with a little politics and whatever else suits the author's fancy thrown in for good measure." The focus and determination with which Henson – an ACLU volunteer and former editor of the radical rag The Polemicist – writes netted him a Koufax Award (awards bestowed on the best liberal blogs) for Best Single Issue Blog. Henson delves into all realms of the criminal justice system, including police, prisons, and parole, while striving for a Texas relevance. A powerful and well researched site.

Brand new on the block is AustinInfo.net. The blog looks in a very organized manner at the Lege, but focuses on the city itself, posting the valuable stuff of municipal minutiae. AustinInfo.net also has a nice Kos-style interface, where users can log in to post their own diaries and exchange ideas through comments. Also in its infancy is Austin Kos (www.austinkos.blogspot.com), a meet-up site for local posters on Daily Kos, and other big-time blogs like Atrios Eschaton, MyDD, and others. While quiet right now, the site is trying to create the type of insightful online community for which the best blogs strive. 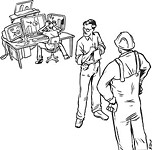 Letters @ 3AM
From a journalist's notebook