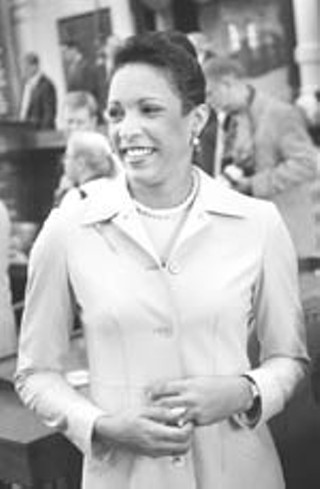 Dawnna Dukes missed a house vote while on vacation in France. (Photo By John Anderson)

Unless you've been vacationing in France for the past few weeks, most of you know that Austin Democratic Rep. Dawnna Dukes missed a crucial tax vote July 6 because she was … vacationing in France. Literally, she was on a flight back to Austin, but she wasn't the only House member who went missing that day, though the Austin Democrat drew the most attention because the person she entrusted (as permitted by House rules) with her "paired" vote – House Appropriations Chair Jim Pitts, R-Waxahachie – un-paired himself at the last minute. Worse, the initial vote on the tax plan passed by a single vote, so Dukes' vote was viewed as the one that could have made the difference on a bill that threatens to stiff the majority of Texans on a sales tax hike.

In addition to embarrassing Dukes, the incident shed light on a time-honored but little-known tradition of pairing two opposing votes in a legislator's absence. Pairing works like this: Dukes was against the bill that Pitts favored, but because Dukes wasn't going to be present to cast her "No" vote, Pitts agreed to abstain from voting and thus allow the votes to cancel each other out. But Pitts had a change of heart before the vote (reportedly after a "friendly" chat with House Speaker Tom Craddick) and informed Dukes' office that he'd be casting a "Yes" vote. So Dukes' office arranged to pair her vote instead with GOP Rep. Todd Smith of Euless. But pairing only works if the vote is not so close as to provoke a request for "verification" – the chair confirming that every member voting is in fact on the floor.

In truth, Dukes' vote would not have made the difference on such a narrow margin because when faced with a close defeat, Craddick has shown a convenient knack for convincing just enough GOP "No" voters to switch their votes to "Yes." Nevertheless, Dukes was criticized for missing a chance to fight for her East Austin constituents. As Dukes explained in a lengthy statement, she made her family-related travel arrangements in April – before Gov. Rick Perry vetoed the education budget and convened a special session on school finance. She informed Craddick of her plans, she said, as well as his chief of staff, the parliamentarian, the Travis Co. delegation, and members of both the Democratic and Black caucuses. She was due back July 7, but after learning the bill would be taken up July 6, she said she tried unsuccessfully to book an earlier return flight. "I never attempted to hide that I was traveling for personal family reasons to France," she said. "I requested to be excused from the proceedings of that day to not mislead anyone about my presence or vote." As an added precaution, she said she arranged to pair her vote with her "dear friend" Pitts, "an honorable man whom I respect and whose friendship I cherish."

As for Pitts, the only hit he took was from the conservative lobby group Texans for Texas, which knocked him for having the audacity to pair his vote with a "liberal!" Indeed, Democratic legislators are familiar with that sentiment. "Sometimes Republicans refuse to pair with Democrats," said one Democratic House leader, Garnet Coleman, D-Houston. "We all worked very hard to pair votes [on the tax vote]," he said. (Democratic Reps. Trey Martinez Fischer of San Antonio, and Craig Eiland of Galveston were also missing in action that day.) "It was easier for Republicans voting 'no' to pair their votes with [GOP] 'yes' votes," he said.

"All things being equal," Coleman continued, "we should all be here on every vote." In his view, the would-be Dukes-Pitts pairing and the missed vote made for a "salacious" news story that took on a life of its own. "Every member has been in this type of situation. We all have families and we all have real lives. But," he added, "this is a lesson for all of us: Be here."