Failing all its courses, the Lege sends a love note to Highland Park

First, let's dispense with the charade that Gov. Ricky's special session has anything to do with school finance reform. Whatever twisted legislation, if any, comes slouching out of the Capitol next week, it will do nothing to address either the structural inadequacies or the glaring inequities in the funding of the state's public schools. Nor was it ever intended to do so, from the moment last January that the governor declared "property tax relief" his own special priority for the 79th Lege. Schools have been, at most, an afterthought, and despite a rhetorical insistence on the part of a bipartisan majority of legislators that the schools do need more money – only the rank ideologues say otherwise aloud – they lack the will to actually raise and spend the funds necessary.

But it's also true that the session isn't even really about property tax cuts – at least insofar as the necessity to fund the schools is employed as the excuse to keep any tax bill "revenue neutral." It follows, then, that the deliberations have become an exercise in what the Republicans ritually like to denounce as the "redistribution of income." Only they never seem to mind if the redistribution of income flows upward. So it is that the Legislative Budget Board found that the House bill would increase taxes on 80% of Texans while cutting taxes for the top 20% – and the higher up the scale you reside, the better your deal.

Never fear. The Senate contemplated that glum conclusion and vowed they wouldn't put up with it. Accordingly, Finance Chair Sen. Steve Ogden, R-Bryan, announced there would be no LBB analysis of the Senate version of the bill.

In saner venues, that's called shooting the messenger. But at the Capitol, Ogden was quickly applauded by the GOP court scribes over at the Texas Public Policy Foundation, who declared that the LBB can't be trusted because TPPF's own "dynamic analysis" of tax burdens indicated that Texas working stiffs should be glad to be granted employment by the magnanimous businesses that locate here, because if we didn't have jobs, we couldn't pay taxes at all.

Not to be entirely outmanuevered, local tax maven Stuart Greenfield took his own look at both plans (as initially presented) in Quorum Report, and concluded, "Under either plan those with incomes between $13,000 and $100,000 would find taxes increasing by almost $400 million under the House plan and $200 million under the Senate plan. The House increase in taxes would fund the $375 million in tax reduction those with income above $100,000 would receive ..." Whatever comes out of the conference committee, the rich get richer, and ... you know the rest.

The episode recalled the gnomic wisdom of the recently defrocked, unlamented Houston Rep. Talmadge Heflin, who, when informed that a tax bill hit hardest at necessities required by the poorest Texans, responded that he "didn't see what the big deal is about regressivity anyway."

Let's Hear It for the One-Percenters

Closer to home, as Rachel Proctor May reports today (p.19), the Austin school district administration and the employee organizations have begun adopting their assigned rhetorical positions in the annual battle over robbing Peter to pay Paul and Mary. The district says it can't afford to fund teacher pay raises over and above rising health care costs, newly mandated programs, and expanding enrollment; Education Austin says administrators are poor-mouthing in order to pressure the Lege (and the Supreme Court) to do something about statewide school finance. Since the Legislature is simultaneously playing the fiddle and twiddling its thumbs, the Austin fisticuffs are being mirrored right now all over the state, although elsewhere with generally fewer resources. As school advocates tirelessly remind us, Austin is by state definition one of the wealthy districts – if you're a superintendent trying to make ends meet in Edgewood or Ysleta, where the buildings are literally falling down, you'd be better off trying to make bricks without straw than waiting for help from the state of Texas.

Not that the state is ignoring everyone's plight. Under a barely reported provision hidden in both House and Senate versions of the school finance bill, the top 1% of wealthy school districts would be effectively cut loose from current recapture ("Robin Hood") limits, and allowed either to spend at will on their own precious darlings or else cut local tax rates in proportion to their abundance of valuable property. The provision has been informally dubbed the "Highland Park Provision," since if it goes fully into effect, that suburban Dallas district would be permitted to spend about twice as much per student ($11,000 annually) as an average district. To allow some perspective, the Equity Center reports that the additional $70 million per biennium allowed to HPISD would be "nearly three times the $25 million set aside during the regular session for the Instructional Facilities Allotment for the next biennium" – that is, the emergency construction monies made available for poorer districts throughout the entire state.

Considering the importance of those one-percenters to funding the business lobby (which has once again defeated any new business tax plan), never let it be said that the Legislature doesn't take care of its own.

In this context, it was somewhat puzzling to read the Statesman's Arnold Garcia excoriating "Robin Hood" on Saturday's op-ed page. First insisting that "everybody" hates Robin Hood, Garcia mused that the school finance recapture plan, by redistributing tax money from the rich districts to poor ones, "reminds me of a relative who flops on your couch, eats your food and sleeps away the day when he's not watching your television. Ask him when he might scrape together the time to look for a job, and he gets insulted."

Let's be really charitable, and presume that Garcia didn't mean to say that working folks in the Valley, or Houston, or Dallas are a bunch of lazy bums freeloading on those truly hardworking suburbanites in Highland Park (or Westlake Hills). (Since he cheerfully beat his embarrassing metaphor to death, I'll let his regular readers judge for themselves.) Can Garcia be completely unaware that rather than "hating" Robin Hood – that is, the equity system of school finance that partially equalizes the radical inequities in statewide property wealth – most school advocates prefer it to anything currently contemplated by the Legislature? Or that indeed the majority of school districts now stand before the Texas Supreme Court in defense of the principles of equity and of free public education currently embodied in Robin Hood?

It's hard to tell with Garcia. When you need to fill up space on a Saturday, and writing something useful would actually require some engagement in the subject at hand, it's a whole lot easier summoning up tired gags about freeloading brothers-in-law. Yet when this represents the quality of editorial discussion at the capital daily, is it any wonder that the part-time legislators at the Capitol – the large majority of whose home school districts benefit from the current system of recapture – feel free to abandon the interests of their own constituents, and to offer instead tender mercies to the business lobby and the forlorn property-owners of Highland Park? 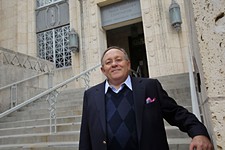